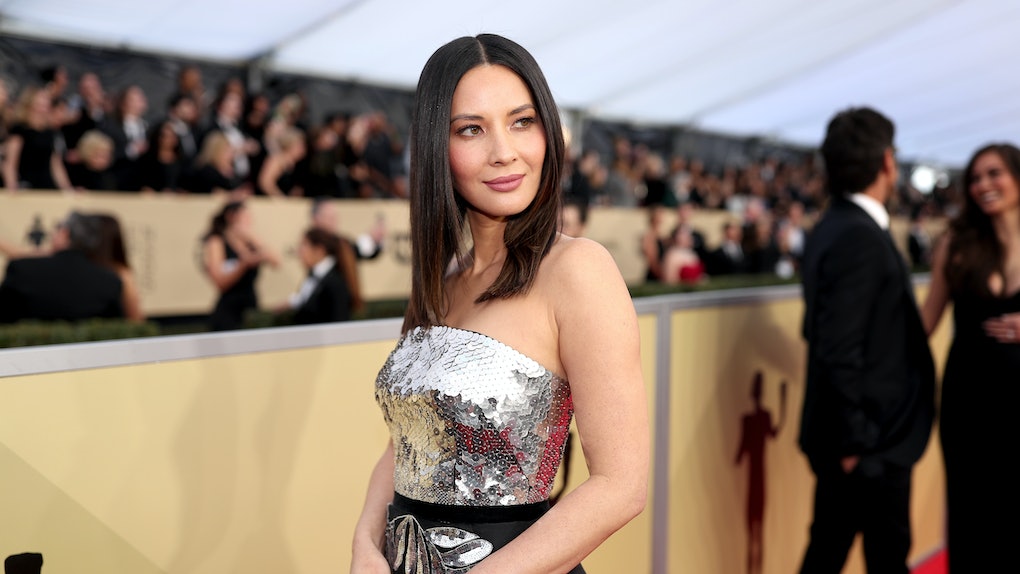 Is Chris Pratt already back off the market? While the actor only announced around a month ago that he had officially filed for divorce from wife Anna Faris, he was already spotted out on a reported "PDA-filled dinner date" with actress Olivia Munn over the weekend. That was kind of fast, right? But as much as we all dig a good love triangle, apparently the Chris Pratt and Olivia Munn dating rumors aren't true — and Munn has the text messages to prove it!.

The X-Men actress, who recently split from Green Bay Packers quarterback Aaron Rogers after three years of dating, took to Twitter yesterday to shoot down all the speculation by sharing a text exchange that took place between her and Faris earlier this month. "Hey there!" Munn wrote. "Sooo... I would never respond to random tabloid stories, but since we know each other I wanted to reach out to you personally to tell you the story about me and Chris dating has 0% truth. I'm sure you already know it's not true, or maybe didn't care either way, but I just wanted to reach out personally to tell you it's not true."

Pretty impressive. Is there anything better than one women being straight-up real with another? And Faris, for her part, definitely seemed to appreciate the way Munn reached out to her directly.

"Oh my god — this town is so f**king crazy," the Mom star texted back. "You are so sweet to text — I love you — having said that if you were my new sister in law I would be thrilled!"

Well that was pretty cool of her! And while I kind of don't get the whole "sister-in-law" thing — perhaps she meant sister wives? —  these two just proved that they are absolute queens in my book. Of course, it probably doesn't hurt that Faris has already moved on from Pratt with cinematographer Michael Barrett. The two have been dating since September, and were reportedly spotted house-hunting last month.

Still, I am loving Munn's whole sisters-over-misters vibe here. She even took the whole 'girl code' thing a step further by composing an awesome five-point list in order to dispel some of the nasty cat fight rumors floating around.

"3. Even if I was dating @prattprattpratt some tabloids got me and @annakfaris all wrong," she continued. "4. Women respect and love each other a lot more than some people like to think."

Of course, my favorite point on Munn's list is definitely her last one — because TBH, it's pretty hilarious.

Oh c'mon! I would have been so here for Crolivia! Or O-pratt. Or Matt.

Meanwhile, at the Jan. 21 SAG Awards, Faris' Mom co-star Allison Janney — who picked up an award for her role in I, Tonya — had only positive things to say about the way the two women have handled the whole gossip-fueled situation.

"Chris and Anna, from my point of view, still love and respect each other very much," Janney told ET's Keltie Knight on the red carpet. "They're just lovely people. And Olivia's a lovely person too, so I'm glad they didn't let a tabloid or whatever... I'm glad they put out the fire before it got out of hand."

Me too. Oh and moral of the story? Always save those texts, ladies!