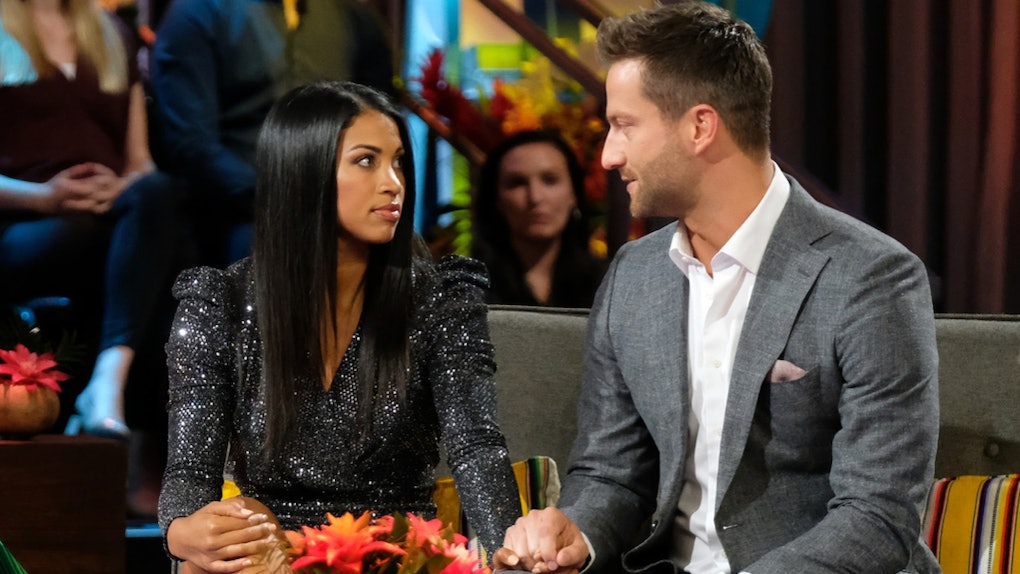 If the final episode of Bachelor In Paradise left you emotionally exhausted, trust me, you're not alone. Although fans have come to expect a certain amount of drama, Chris and Katie’s body language on the ‘Bachelor In Paradise' finale suggested the couple could really be struggling. At certain moments, I even felt guilty watching the events unfold. It can't be easy to argue with your SO in front of alive studio audience. Somehow, the conflict between the duo felt so far removed from the (at times) laughable drama that normally occurs, it made the tension in the room thick.

Considering how solid Chris and Katie’s relationship seemed throughout the season, it was surprising to hear about their struggles. Katie attributes some of their current problems to how their relationship was portrayed on-screen. “It’s just been really difficult for me to watch back because I thought I was going to watch back and see how in love with me you were,” Katie told Chris during the in-studio follow up. “But I didn’t see that. I don’t want to end things. I’m just conflicted. I want it to get better but I want him to want it to be better.”

Chris also admitted things had been "rocky" but made it clear that he wasn't giving up. “I honestly feel the best when I’m with you,” he told Katie. “My family loves you, my friends love you and I love you. I do and I think there’s so many more better days ahead of us and I want to see those days, I really do.” To better understand the complicated dynamic between these two, I spoke to body language expert and author of Persuasion Point: Body Language and Speech for Influence, Traci Brown, to find out what their physical dynamic had to say about their relationship.

The Proposal Started Off Well.

"They both look really happy here," Brown tells Elite Daily. "He's got a big smile and she's got her hands positioned to show positive expectation." At this point, it seemed like it was smooth sailing for the pair.

Although the first part of the proposal looked solid, their subsequent embrace sent mixed signals. "This looks a bit mismatched," says Brown. "He's controlling where her head goes but he doesn't look like he's going in for the kiss, just pausing with their foreheads together. On the other hand, she's pulling him in, going for the kiss."

Katie Doesn't Appear To Be In The Moment.

Seeing Katie and Chris share a moment of intimacy was sweet, but Brown notes that Katie looked a bit reserved during their kiss. "She's not into this moment," observes Brown. "Her legs are crossed (that can be protection) and she isn't reaching for him."

Chris expressed that despite how much he wants things to work and believes in their future, things between them had been "rocky." According to Brown, their body language also suggests "there's struggle on both sides," she adds. "They both have unemotional looks on their faces, but this time she's reaching for him."

They Still Can't Seem To Get On The Same Page.

Perhaps the most disheartening part of the night came after the in-studio portion, when Katie and Chris fought backstage because he felt "blindsided" by some of her comments. "She's showing her palms but her fingers are interlocked so that's a mixed message of telling her truth and almost wanting to hide it a bit," says Brown. "He's got that blank look. And we know from the video that he's doing his best not to engage in the conversation."

Even though these two may be going through a rough patch, we'll have to wait and see how things between them turn out in the long run. The good news is that both Katie and Chris posted very heartfelt 'grams acknowledging that even though things aren't perfect, they're both still very much giving the relationship their all. Ultimately, all we can do is hope they're able to work through their issues and come out stronger in the end.