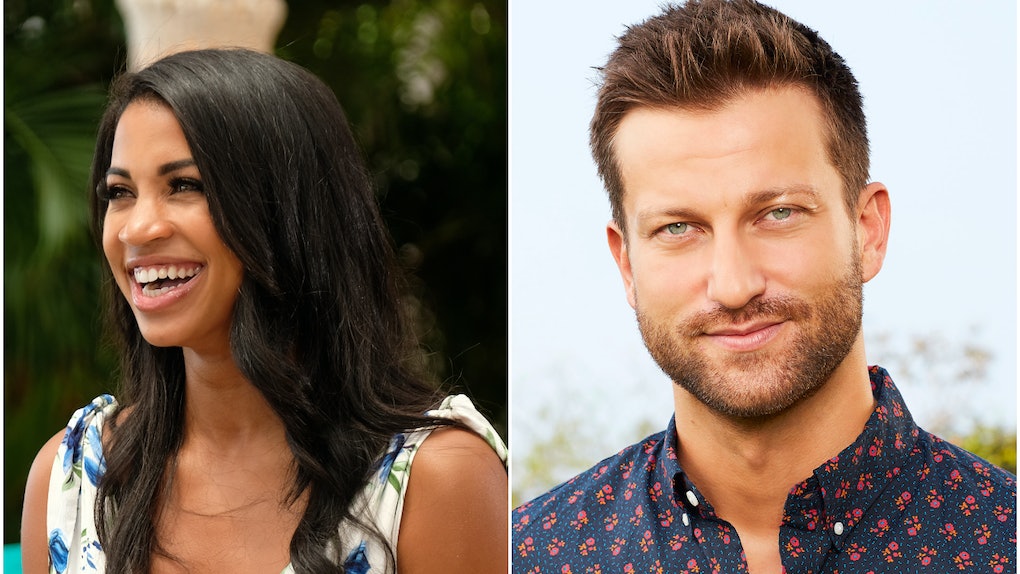 Adjusting to real life can be a bumpy transition for couples who met and got engaged on Bachelor in Paradise. Although three of the four remaining couples on Season 6 got engaged in the Sept. 17 finale, the episode's reunion footage revealed that contestants Chris Bukowski and Katie Morton were struggling outside the Bachelor bubble. This update about Chris and Katie's relationship after Bachelor in Paradise clears things up.

Returning to the Bachelor franchise after several previous appearances, Bachelorette Season 8 alum Chris was initially all about his Paradise connection with Katie. After he comforted her about gently rejecting contestant Wills Reid, the pair coupled up, but in a panic, Katie encouraged him to explore other relationships. This resulted in Chris going on a date with Jen Saviano, but if his nausea on their sailing date wasn't a clear enough sign, Chris realized he wasn't ready to move on from Katie. Meanwhile, Katie recognized her move as self-sabotage and feared she had ruined her chances with Chris.

The two eventually found their way back to each other, but even after becoming a committed pair, Katie wanted more from Chris. On one of their final dates, she confronted him about not opening up to her, and he finally spilled that expressing emotions was difficult for him.

Although Katie still had reservations about Chris putting in an effort, she and Chris were both ready to go all in with each other. "I want to give you 100% of everything that I have to offer," he told her. "It's just hard for me. I want to get to that point and I'm trying."

Ahead of their fantasy suite date's overnight portion, Chris elaborated on his feelings. "I'm looking forward to the future and the rest of this evening and where we could go from here ... I'm excited to show you that I won't falter."

The two woke up the next morning in good spirits, with Katie saying, "I feel giddy. I couldn't have asked for that to have gone more perfectly ... I think it could really work, but I don't know if he's going to propose to me or not."

Telling cameras he'd know in the moment whether to propose, Chris ultimately popped the question to Katie, saying, "I just feel like I'm the luckiest man in the world right now. You make me feel calm, comfortable, you make me feel like myself, and I feel like I didn't even know what that was sometimes ... I can't imagine a second without you. I see you in my tomorrow, I see you in my forever, and tomorrow isn't guaranteed. I want to make this the best moment of our life."

Katie tearfully accepted, but the reunion show had upsetting updates about their relationship.

The reunion showed Katie in the hot seat without her engagement ring and expressing some mixed feelings about their relationship. "Communication's been hard," she admitted. "We're still engaged. I just put in so much effort every day and I love him so much but I put in so much that my tank empties and if I'm not getting it filled, I break down."

She grew emotional before continuing, "I loved him the whole time. And he would tell others that he loved me and the only way I knew Chris loves me is the way he tells everyone else. Not the way he shows me ... I fell in love with potential that never came to fruition and I'm just praying it does."

Chris joined her on stage, telling Chris Harrison their relationship was a little rocky. He was unsure about what Katie's ring-less hand meant, but Katie said, "I thought I was gonna watch back and see how in love with me you were but I didn't see that."

"I appreciate the way you are, how much you care," Chris told her. "It's usually you supporting me ... but I guess I am a little bit slower at that that you are."

Katie admitted she had never been so insecure in a relationship, tearing up about not always feeling as loved as she tried to make Chris feel. "I don't want you to feel insecure because you're amazing," Chris said. "I'm sorry that you feel that way."

Katie said she held onto glimpses of how loving Chris could be, having seen friends go through what she was currently experiencing. Chris understood her point and where he was lacking, saying, "I think there are so many more better days ahead of us. And I want to see those days, I really do."

Katie then allowed for Chris to put her ring back on after both concluded they wanted to stay together despite their trials. Backstage, Chris admitted to Katie he was surprised and a little blindsided. Katie claimed she had expressed these thoughts to him without much results. "I felt that I looked desperate," she said of her Paradise edit. "I feel like [our conversation] never gets anywhere."

"He knew I was going to tell the truth," she told cameras, wondering if he expected her to lie instead. In the background, Chris walked off into the distance.

It looks like Chris and Katie have a tough road ahead of them, but here's to the two of them dedicating as much as possible to making their relationship work. Season 24 of The Bachelor premieres on ABC in January 2020.