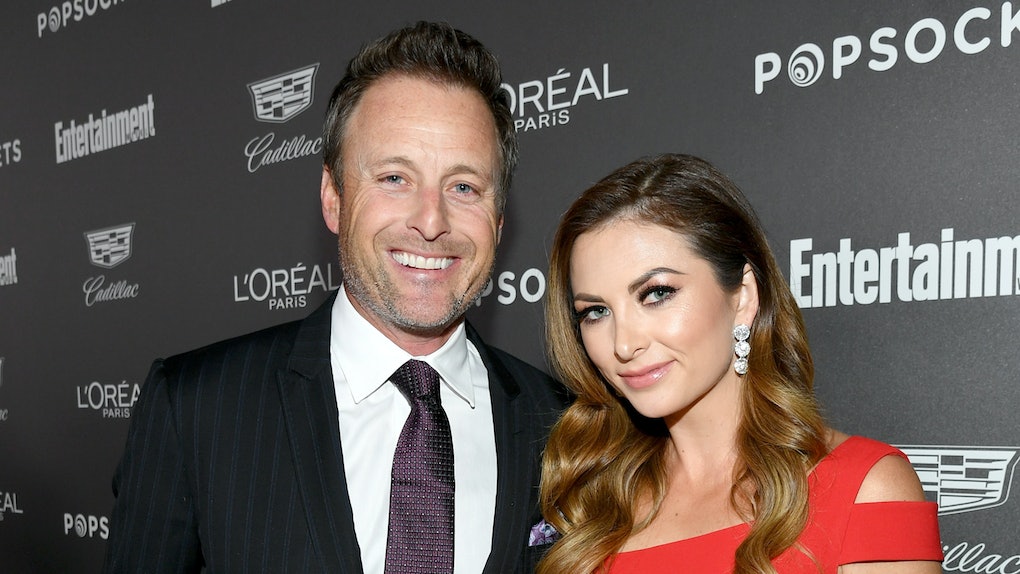 We spend a lot of the time talking about the love lives of the contestants of Bachelor Nation... but what about the show's host? Who is he dating? Well, Chris Harrison's new girlfriend Lauren Zima just made her red carpet debut with him at the Chateau Marmont in Hollywood last night (Jan. 29, 2019) for the Screen Actors Guild Awards pre-party. OK, I'm just going to come right out and say it: These two look smoking hot together.

So, who is the lady lucky enough to get Harrison's rose? Zima is actually a successful star in her own right. According to her Twitter bio, she's not only a host at Entertainment Tonight but also a senior producer there. Yep, America's favorite host has found his own equally successful host to fall in love with. Swoon!

Oh, and just when you thought the two couldn't have more in common, there's also this perfect tidbit in her bio: "Love Bachelor, Bravo and a good groutfit."

First of all, same. Who doesn't love a good groutfit? Second, she's a fan of Bach Nation! Meaning she's actually interested in Harrison's work and familiar with his world!

In fact, just a few weeks ago, she posted a picture of herself with this season's bachelor, Colton Underwood, along with this caption:

So @coltonunderwood just told me he goes off the grid this season and quits #TheBachelor. Seriously. New interview with this guy about the aftermath of that now-famous fence jumping moment, last night’s big premiere and much more coming to @entertainmenttonight 🌹 by the way guys, #ColtonUnderwood is seriously such a gentleman and i hope he finds everything he’s looking for ❤️

Zima has even been described as Entertainment Tonight's “‘number one reporter for all things ‘Bachelor’ nation.”

So, yeah, it's safe to say that she's familiar with her new boyfriend's world.

Cosmopolitan reports that this relationship marks Harrison's first relationship since his divorce from ex-wife of 18 years, Gwen Harrison, in 2012.

Since his divorce, many fans of the show naturally wondered if Harrison would use the ABC franchise to help him find a second shot at love. But he hasn't been shy about letting the world know that being on the show as anything but the host isn't really for him.

I mean, I think Harrison is a catch so I beg to differ on his assumption. But... I'm still glad to see he managed to find love one way or another.