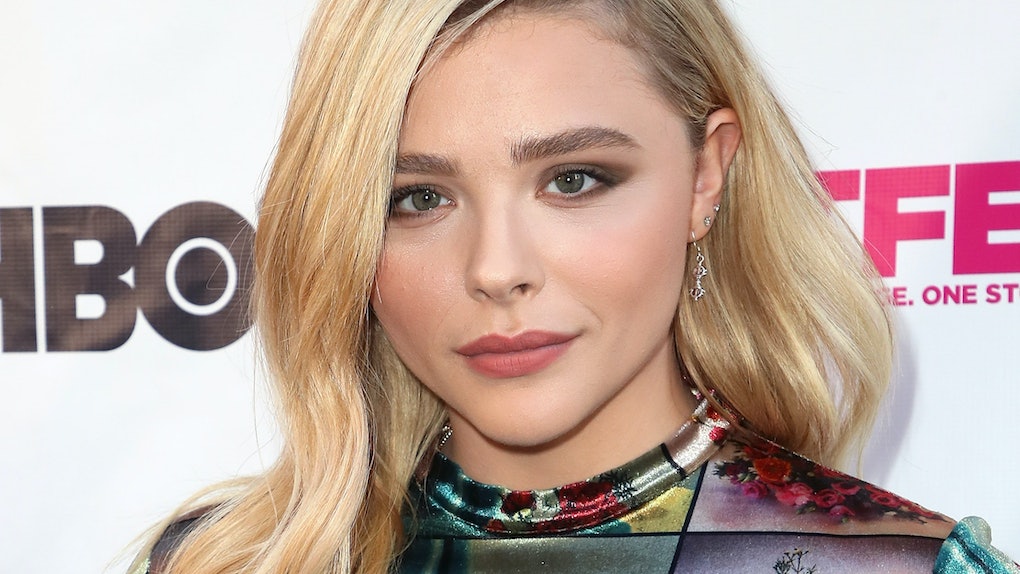 Chloë Grace Moretz has been famous for the majority of her life. She started her acting career 15 years ago at the age of 6, giving her the unique experience of growing up in the spotlight. How does someone whose whole life has been spent on the public stage figure out how to take a step back from it all and focus on self-care? It takes a certain level of self-awareness and a willingness to focus on yourself and what you need. Chloë Grace Moretz's self-care routine is the result of years of being in the public eye and learning how to navigate it.

"Routine is extremely important to me," Moretz tells me in an exclusive interview with Elite Daily. "No matter how busy I get, I always do my best to keep my routine going." One of the main components of that routine is exercise. "That [routine] usually includes a trip to the gym (I try to go at least four times a week)," she tells me, adding that spending time with family is also a key factor in how she decompresses from the stress of her career. Another part of that routine is meditation. Moretz has partnered up with the Oculus Virtual Reality Headset creators to show fans how the device can be used as more than just a cool way to experience video games.

Social media can be an exhausting world, but having the opportunity to show what I believe in, and fight for, to millions of people is an incredible thing.

As a self-proclaimed cinephile (a lover of film and its history — no shocker there), Moretz says the technology of the Oculus devices is what appealed to her. "I’m a cinephile," she tells me, "so Oculus was a natural fit for me. Their technology provides an amazing opportunity for fans to experience the beauty of film up close and personal." Now, read any article on self-care and it'll tell you that detaching yourself from technology for a bit is a great help in clearing your mind. While Moretz admits that social media breaks are good for anyone, she says she loves to use the virtual reality set to help her meditate.

"I love the guided meditation apps," she says, "they’re always great on the hectic days." She adds that the device's compact size allows her to have this guided meditation available whenever she needs it. And with a schedule packed with filming new projects, attending the premieres for The Miseducation of Cameron Post, Surprisia, and Greta, appearing at award shows, and working on her first foray behind the camera with her brother, being able to unwind on the go is a must. And despite thinking it's good to disconnect for a bit amid all of the drama social media can bring (Twitter fights with the Kardashians come to mind), Moretz still sees a lot of beauty in social media.

"I try to focus on the beauty of my platform and being able to connect to my fans one-on-one," she tells me. "Social media can be an exhausting world, but having the opportunity to show what I believe in, and fight for, to millions of people is an incredible thing. The pros [outweigh] the cons 10 to none!"

She's been using her Instagram and Twitter profiles to continue the conversation about her role in The Miseducation of Cameron Post — a story about a queer teenager who's sent to a religious gay conversion therapy camp after she's caught making out with her high school's prom queen. The teenagers forced into this camp aren't physically abused, rather the film focuses on the emotional abuse inherent in telling queer teens that what feels natural to them is unnatural and the trauma on their mental health thereafter. "How is programming people to hate themselves not emotional abuse?" Moretz's character asks in the film.

Being able to combine my passion for activism with my art is something I haven’t been able to do before, and it was truly an incredible experience.

Telling this story, Moretz tells me, was a landmark moment for her career, and her performance in the film is getting awards buzz. (It won the grand jury prize at Sundance this year and has gotten largely positive reviews.)

"This role was especially meaningful for me being that I have two gay brothers," she says. "I’ve always been an advocate for the LGBTQ+ community, so being able to combine my passion for activism with my art is something I haven’t been able to do before, and it was truly an incredible experience." Moretz says preparing for playing Cameron Post was an entirely new challenge for her as well. "This was also a unique role from a preparation perspective," she tells me. "We were dealing with a horrid form of psycho manipulation that was so foreign to us, so we met with survivors of conversion therapy to try and understand the realities of life in a conversion therapy camp."

Speaking of her brothers, the next project Moretz is working on is going to be a family affair. "I can’t wait to be taking on the chance of jumping behind the camera to co-direct with my brother, Trevor, on our first short film," she tells me. "It’s exciting to be able to be in a completely different position within this industry I’ve been in as only an actor for 15 years now." No matter the curveballs her career and life in the world of social media throws her next, she's determined to focus on the positive aspects that allow her to connect with her fans on a daily basis. "I really do my best to focus on the positive vibes coming from my fans," she says. "I use social media as a way to connect with my fans, and the experience has certainly evolved. There are so many different ways to consume and engage with social media that it makes the experience more real."

Still, Moretz tries to remind herself that taking a step back from that connection is just as important as staying involved with it. "It’s important to reconnect and remember what your life is outside of your work life," she explains. All of this self-care is going to be needed as her career picks up even more speed in the coming months. "2019 has a lot in store," she says, "and I cannot wait."

More like this
Mark Tuan's Quotes About His Solo Career Tease Endless Potential For The Future – EXCLUSIVE
By Michele Mendez
Billy Porter Knows He's A Walking Piece Of Art. That's The Point — EXCLUSIVE
By Margaret Blatz
'Shiva Baby' Director Emma Seligman Is Making Films For Her Generation — EXCLUSIVE
By Abby Monteil
Stay up to date