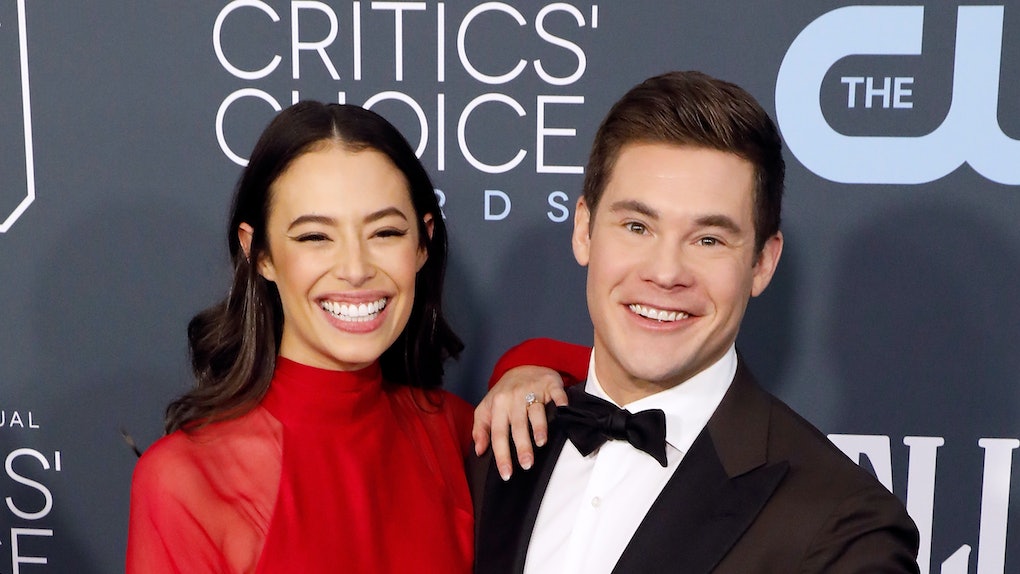 A perfect example of this duo’s dynamic was on display in their engagement announcement on Instagram back in October 2019. Posting alongside a series of fun candids, Bridges said, “We are doing it!! I love this man with my whole heart and I am so excited to be with him forever. I’ve known we had a special connection since we first met (well FIRST I liked the way his butt looked in his jeans and the way he made me laugh and the fact that his backpack was monogrammed which seemed VERY adult to me five years ago) and I quickly learned that he is the kindest, funniest, most incredible man I’ve ever met. I’m so proud to be his girl and will be even prouder to be his wife. Let’s do this baby @andybovine.”

The two first began dating after meeting on the set of their film Final Girls in 2014, and have essentially been inseparable ever since. You should expect nothing less from a Capricorn and Scorpio couple, though, because when those two fall for one another, they get obsessed in the best possible way.

Bridges was born Dec. 27, 1991, under the sign of Capricorn, and Devine’s birthday is Nov. 7, 1983, which makes him a Scorpio. Here's what we can surmise about their connection based on their astrological compatibility.

They learn a lot from one another.

Capricorn and Scorpio are fundamentally very different from one another. Capricorn's an earth sign ruled by Saturn, the planet associated with structure and ambition. This means they're grounded, logical, and driven. They don’t base their decisions on emotion, but instead lay out all the data then decisively move forward based on careful analysis. They don't play games and they're upfront about whatever they're thinking and feeling, to the point of being blunt. Scorpio, on the other hand, is a water sign ruled by Pluto, the heavenly body associated with power and transformation. They're very in tune with their emotions, but they would never let that show. Scorpio's mysterious, cautious, and prefers to play things secretly and strategically.

Yet, these two were practically made for one another, because they both have the wisdom to recognize that they can actually learn and grow from one another. They also have the open hearts and minds to do so — that is when they meet the right person who they feel they can trust. Scorpio aids Capricorn in tapping into their emotional side and, in return, Capricorn helps ground Scorpio and reigns in some of their more destructive tendencies. Both of them can make these changes because they have a relationship built on a solid foundation of trust and security.

They struggle to be on the same emotional wavelength.

While one of this couple's greatest strengths is that they can learn and grow from watching one another, it's not something that happens right away. It takes time to nurture the kind of trust and confidence it takes to open up, and both of these signs can be a bit cautious with their hearts at first. During this time, they can have some difficulty getting on the same wavelength. Scorpio's very sensitive and can feel as though Capricorn's tendency toward intellectualizing everything makes them emotionally shallow. In return, Capricorn can be short on patience for Scorpio's emotional response, seeing it as over-the-top and unnecessary. The only way to overcome this kind of difference is with patience and by practicing empathy. It also helps them to remember that, just because you don't always agree, it doesn’t mean you can’t learn to understand where the other person's coming from.

They're both goal-setters who have a plan for the future.

These two signs have no trouble connecting when it comes to planning for the future. Both Capricorn and Scorpio like to set and achieve goals, while taking a long view of life rather than being overly focused on the here and now. This is the couple who has an agreed-upon timeline of when and where the relationship's going, and they thrive in working together to hit each of those milestones. It makes them feel like they're a team; it's them against the world, which creates a powerful bond.

Their sexual compatibility is off the charts.

The other strength this duo has is chemistry in the bedroom. If you think Capricorn isn’t able to keep up with Scorpio, think again. Yes, they may be a bit more traditional in some areas of their life, but there's something about a Scorpio lover that brings out the wild side in Cap. Perhaps it's because there's no judgment with a Scorpio lover who's happy to explore and experiment and encourages Capricorn to get in touch with their deepest desires. In a word, this pairing's sexual chemistry is hot.

When taken all together, is it any surprise that Bridges and Devine can't seem to get enough of one another? The future does look bright for this couple whose planets have perfectly aligned.