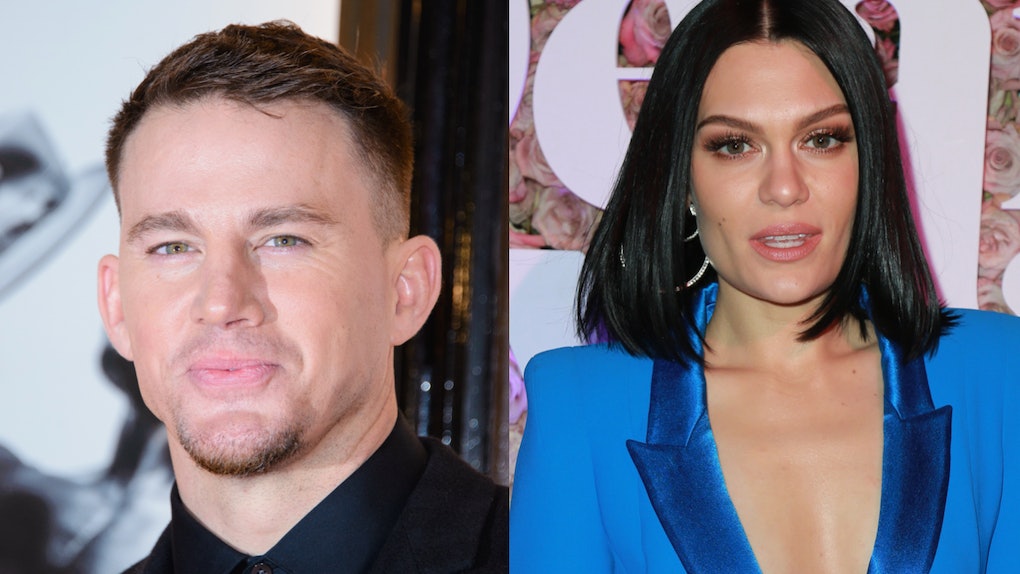 Channing Tatum's Instagram DM To Jessie J Is So Adorable

Imagine you got a notification on your phone that Channing Freaking Tatum just sent you a direct message on Instagram. Well, your dream is Jessie J's reality. And Channing Tatum's Instagram DM to Jessie J is pretty much everything you would expect out of a DM from one of the sexiest men alive.

In an uncharacteristically public display of affection, 30-year-old J decided to share an adorable direct message she received from her 38-year-old bae, Tatum, with a heart she drew around his message.

So... what does a DM from Channing Tatum look like, you ask? Well, let's just say it's a whole lot better from the standard dog meme or "u up." No, instead, Tatum decided to charm his lady with a full-on rap. Or poem. But I choose to believe it's a rap for his musically inclined love.

Yes i won't rest till i caress Fresh face Jess. I will finesse till Success. Never digress. Just progress. Bless

You guys!! He wants to caress her "fresh face." Have you literally seen everything cuter?! I know I haven't.

J took a screenshot of the adorable message and drew a red heart around Tatum's rap along with two especially flirty emojis.

Rumors about Tatum and J reportedly dating each other first started swirling about back in October 2018 after Tatum was spotted at J's concerts in Seattle and Salt Lake City.

Tatum seemingly confirmed the rumors a month later in November of 2018 when he posted a picture obviously taken from the crowd at one of J's shows along with this caption:

This woman just poured her heart out on stage at the Royal Albert Hall. Whoever was there got to witness something special. Wow.

So, yes, he makes raps for her and publicly supports her career. True love is out there, people!

For her part, J has kept relatively quiet about her relationship with Tatum. Up until now, the only time she opened up about Tatum on Instagram was when she called out tabloids for comparing her to his ex, Jenna Dewan.

"I rarely, but sometimes see that my name is involved in stories online that I do not agree to. I often ignore them as 99% of the time it is something that doesn't serve any positivity to speak on," she wrote. "However there is a story I have seen be re written over and over again in the past few weeks that talks about myself being compared directly to another beautiful woman regarding our looks and people picking who they think is prettier."

"I am here to talk about the headline and the way the story has been written, I have continuously tried to find something positive from this article…I am yet to," she continued. "Who feels good from this story? I know I don't. Who does this story inspire?...? Is picking who is prettier and then continuing to say why a good activity for women to participate in? No."

"I'm talking in general too. Beyond this story. It's constant with women. Picking favourites. Do the media do it with men? No. Are women gaining a positive lesson from it? No," she went on. "You only have to look at a few of the comments to see that these stories are not inspiring women but mostly women ripping other women down."

"I am so disappointed and embarrassed that my name is even involved. It's not something I stand for, at all," Jessie told her followers. "I don't take stories like this lightly. Because I know the kind of impact it has on younger girls reading it. I spent so much of my childhood trying to be comfortable in my skin just like so many other little girls, and when I got older, decided to spend my career making lots of music to try and help/inspire myself and all the other women to see their beauty from inside out and will continue to do so. Man does the world need it. More now than ever."

Here's to hoping that the focus continues to stay away from the comparisons J spoke out against and more on the loving messages Tatum sends her!