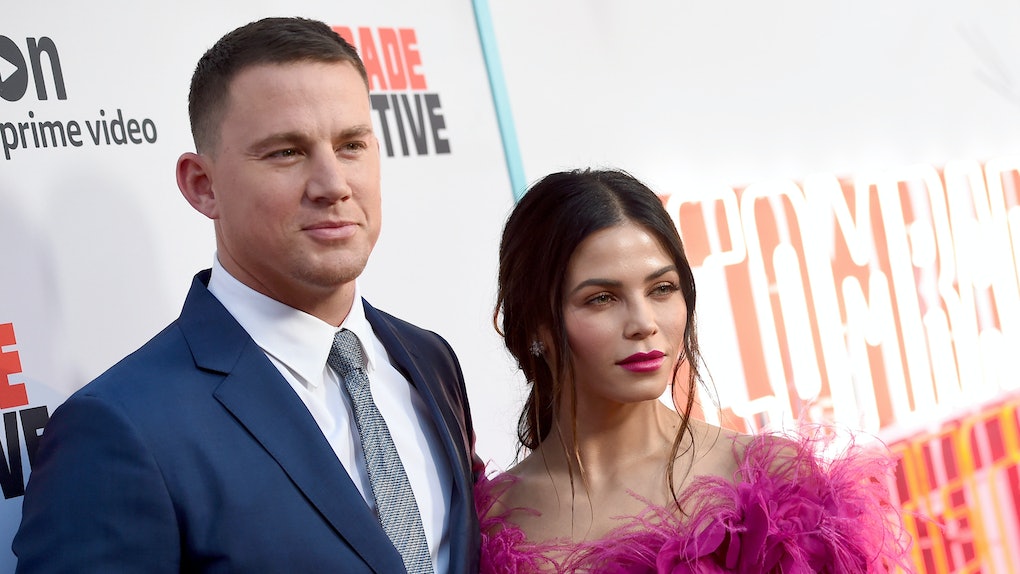 Channing Tatum and Jenna Dewan have come to a custody agreement, it seems. According to a new report from E! News, the former coupl ewill "equally divide and alternate" custody of their 5-year-old daughter Everly. So, Channing Tatum and Jenna Dewan's reported custody agreement seems like it’s a very cordial one! Elite Daily reached out to Tatum and Dewan’s teams for comment on the report.

Of course, there were more details to the agreement than just the "equally divide and alternate" stipulation as stated above. In court documents obtained by E! News, it was revealed that Tatum and Dewan had not followed a "consistent or formal" schedule since their split in April 2018. Apparently, Tatum is hopeful that an official custody agreement will be beneficial to Everly and help her "thrive even more." E! News also reports that Tatum wants a custody arrangement that is "equal, mutual and self-executing."

As part of their agreement to equally divide and alternate custody, Tatum reportedly requested that he have Everly Mondays and Tuesdays, while Dewan take custody of her on Wednesdays and Thursdays. The two stars will alternate visitation on the weekends, according to E! News.

The holidays will also be divided and alternated between them. The only exception will be Halloween during which Tatum and Dewan "shall try to work together to try to spend Halloween together, trick or treating with Everly from 5:00 p.m. to 7:00 p.m."

While the wording of their Halloween plans may seem a bit formal, their idea of the holiday isn’t! In 2018, Tatum and Dewan reunited on Halloween to share the day with their daughter and they did so in really cute costumes. In photos published by People at the time, you can see Dewan dressed as Cleopatra and Tatum dressed as the Genie from Aladdin. Have a look at them here. So, the legalese in these custody documents obtained by E! Is formal, but Dewan and Tatum’s way of celebrating Halloween is definitely not.

Custody wasn’t the only thing that was detailed in those documents, though. Tatum also gave his observations about how Everly has handled her parents’ separation, both emotionally and psychologically.

"Since our separation and on the occasions that we have been together, Everly appears very happy and comfortable when she is with [Jenna] and me," Tatum said in the documents obtained by E! News. "In my opinion and experience, Everly has appeared to adjust to our separation and living in two homes exceptionally well."

Tatum has also apparently gone above and beyond to help his daughter adjust to the fact that her parents aren’t together anymore. He even re-decorated her room as part of the adjustment process.

“I decorated Everly's room very girly in a fairytale and fantasy theme ... with pictures of Everly with both [Jenna] and me on trips," Channing revealed. "The room had bunk beds, which Everly was ecstatic about."

All in all, it sounds like both Dewan and Tatum are totally committed to keeping Everly as happy as possible!