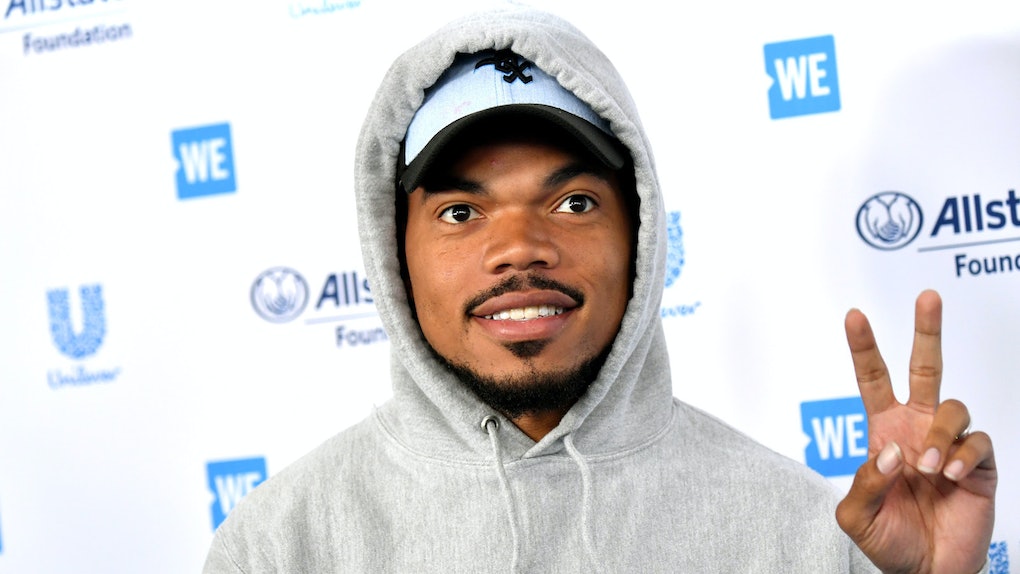 Chance The Rapper Is In The New 'Lion King' Movie, Thanks To Donald Glover

As if the new Lion King adaptation did not already have enough superstars in it, Chance the Rapper just revealed that he also has a part in the upcoming movie. After The Lion King's world premiere on July 9, the music superstar took to Instagram to reveal that not only has he been a lifelong fan of the Disney story, but he also consulted on the 2019 adaptation and even landed a surprise part in the final cut of the movie. That's right — Chance the Rapper is in the new Lion King movie, and he shared the whole, emotional story that led to him fulfilling his childhood dream of being in the film.

Fans already knew that The Lion King would be packed with musical superstars like Beyoncé and Donald Glover, but nobody knew that Chance the Rapper was involved until the movie's world premiere. Chance posted a collection of photos from the premiere on his Instagram, including a shot of the film's end credits that reveals he has a role in the movie. According to the credits, Chance plays a character known only as Bush Baby. In his Instagram caption, Chance hinted that his role involved a few lines and some singing.

His caption also outlined what a monumental moment this experience has been for him, as well as how he got involved in the first place. Chance wrote that he has been "obsessed with all things related to The Lion King" his whole life, including all three Disney films, the TV shows, and the Broadway musical. Apparently, Donald Glover knew about Chance's obsession, and suggested that director Jon Favreau bring him on as a consultant in making the new adaptation. So, for the past year, Chance has been advising the Lion King team during production, and apparently, one thing led to another and Favreau asked Chance to record some lines and some music — and now he is in the film as Bush Baby. "It's all a blur, but I’ll tell [you] it's one of the best blurs of my whole life," Chance wrote.

That is one more superstar to keep an ear out for when fans go see The Lion King next week. It sounds like Chance's role is likely a pretty small one, so be sure to listen closely so you do not miss it.

Although Chance said that he recorded some singing for the movie, his name does not appear on the tracklist of the Lion King soundtrack. However, there is still the possibility that he may be one of the several artists to appear on the Beyoncé-curated companion album to the movie, called The Lion King: The Gift. Beyoncé announced that she would be releasing the full album of original songs — inspired by the movie and recorded by some of her favorite artists — on the same day that The Lion King hits theaters. The lead single from that album is Beyoncé's inspirational track "Spirit," which is also featured in the film's soundtrack.