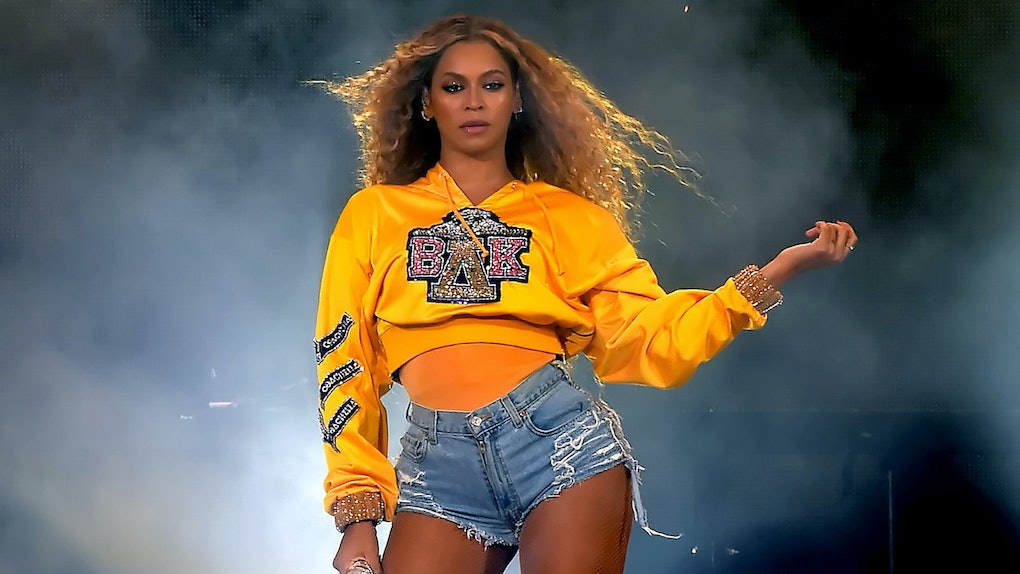 The new Lion King movie is not only remaking all of the classic songs from the original Disney cartoon; the new soundtrack is also hitting fans with a brand new Beyoncé track to obsess over. Ever since the tracklist for the Lion King soundtrack was released with a mystery track cryptically hidden, fans have been dying to hear what was sure to be an original Beyoncé song. And now, we finally have that long-rumored song. Beyoncé's song "Spirit" from The Lion King soundtrack just dropped, and it already fits in with the rest of the classic songs so well.

The powerful, gospel-inspired new song "Spirit" begins with some African chanting, which then gives way to Beyoncé's voice, which starts off quietly and builds to a booming chorus. It's placement on the soundtrack suggests that Nala will sing "Spirit" in The Lion King to inspire Simba to return to Pride Rock and reclaim it from his villainous uncle Scar.

Not only is "Spirit" on the new Lion King soundtrack, but it is also the first single from a brand new Beyoncé-curated album called The Lion King: The Gift, which will be released on the same day as the movie. The Gift album differs from the soundtrack in that it will feature several of Beyoncé's favorite artists performing new songs that have been inspired by The Lion King, such as her track "Spirit." You can listen to "Spirit" below:

In a statement accompanying the release of "Spirit," Beyoncé shared that her new curated album The Lion King: The Gift will mix genres to create a whole new way to experience the classic story.

This is sonic cinema. This is a new experience of storytelling. I wanted to do more than find a collection of songs that were inspired by the film. It is a mixture of genres and collaboration that isn’t one sound. It is influenced by everything from R&B, hip-hop and Afro Beat.

The new original song is actually the second track that fans have gotten to hear Beyoncé sing from the Lion King soundtrack. Last month, a TV spot for the upcoming movie featured a short snippet of Beyoncé and Donald Glover's rendition of "Can You Feel the Love Tonight." Unfortunately, these will be the only two songs that Beyoncé performs for the new movie.

The rest of the new adaptation's soundtrack features new takes on beloved classics: Billy Eichner and Seth Rogen (Timon and Pumbaa) will lead Donald Glover (adult Simba) and JD McCrary (young Simba) in "Hakuna Matata," Chiwetel Ejiofor (Scar) will bellow out an updated version of "Be Prepared," and John Oliver (Zazu) will join McCrary and Shahadi Wright Joseph (young Nala) in "I Just Can't Wait to Be King."

But "Spirit" is not the only original track being added to the 2019 version of The Lion King. Elton John also returned for the new movie to record his own original song, which is called "Never Too Late."