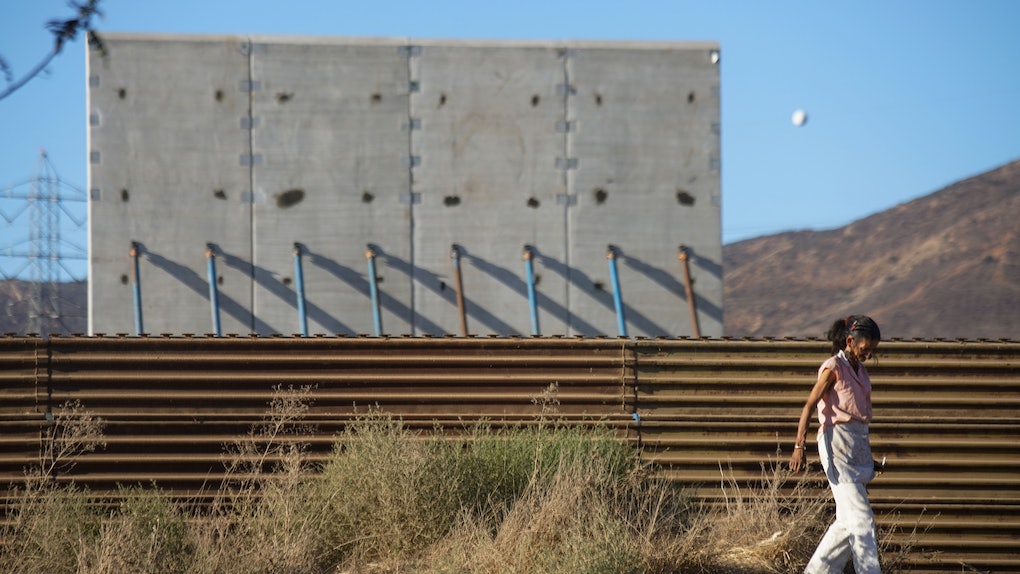 Cards Against Humanity says it's on a mission to save America, having realized that "the government is being run by a toilet." Step one of that grand plan involves the U.S.-Mexico border, where the R-rated card game says it purchased a pieces of land — just to make it harder for President Donald Trump's administration to build a wall there. The border wall fight is all apart of their latest campaign, which is literally called the Cards Against Humanity Saves America Campaign, just in case there was any confusion about what their mission is.

In a summary that's super flattering to the President of the United States, the campaign's website explains its mission, saying,

Donald Trump is a preposterous golem who is afraid of Mexicans. He is so afraid that he wants to build a twenty-billion dollar wall that everyone knows will accomplish nothing. So we’ve purchased a plot of vacant land on the border and retained a law firm specializing in eminent domain to make it as time-consuming and expensive as possible for the wall to get built.

For a price of $15 dollars, customers were offered a membership in the campaign, which would then entitle them to six "America-saving surprises" surprises that would be delivered to their homes during the holiday season.

The first of those surprises, however, isn't a surprise at all. At least not anymore. "On Day 1, all Cards Against Humanity Saves America recipients will get an illustrated map of the land, a certificate of our promise to fight the wall, some new cards, and a few other surprises," the campaign's website reads.

Now, understandably, you might have some questions. Luckily for you, Cards Against Humanity has answers. So if you're wondering what the other surprises are, there's an answer for that: "The nature of a surprise is that it surprises you when it occurs."

And if you're wondering why a card game is getting political, there's an answer for that, too: "Why don’t you stick to seeing how many Hot Wheels cars you can fit up your asshole?"

And just in case you were wondering if ordering these surprises would soon make you the subject of a dossier, there's an answer for that too: "The surprises contain no sexual content, graphic violence, or footage of Donald Trump watching Russian prostitutes urinate on a bed Obama slept in. They do have some naughty words, though."

And as if the campaign's Q&A sessions wasn't enough, there is a super helpful infomercial the campaign put together, which you can watch below:

The video is set in the future, when — as Cards Against Humanity imagines it — millennials will definitely be thanking their lucky stars that the campaign existed.

A "historian" in the video explains,

Everyone who signed up for the promotion, was given a small portion of the land. That way, together, they owned it. The government wold have to take them to court and fight in order to put up the wall. This was just day one of the campaign. There were still five more days, five more days, of incredible surprises, all for just $15.

Did we mention that the campaign would cost you only $15 dollars? Pretty sure we forget to tell you that it's just $15 dollars.

That's irrelevant information now, though. According to the campaign's website, there are no longer any slots remaining. They've all been sold out.

So when your grandkids asked about the time Cards Against Humanity saved America, you'll just have to hang your head in shame, knowing you did nothing to contribute to what will surely be remembered as a historic event.