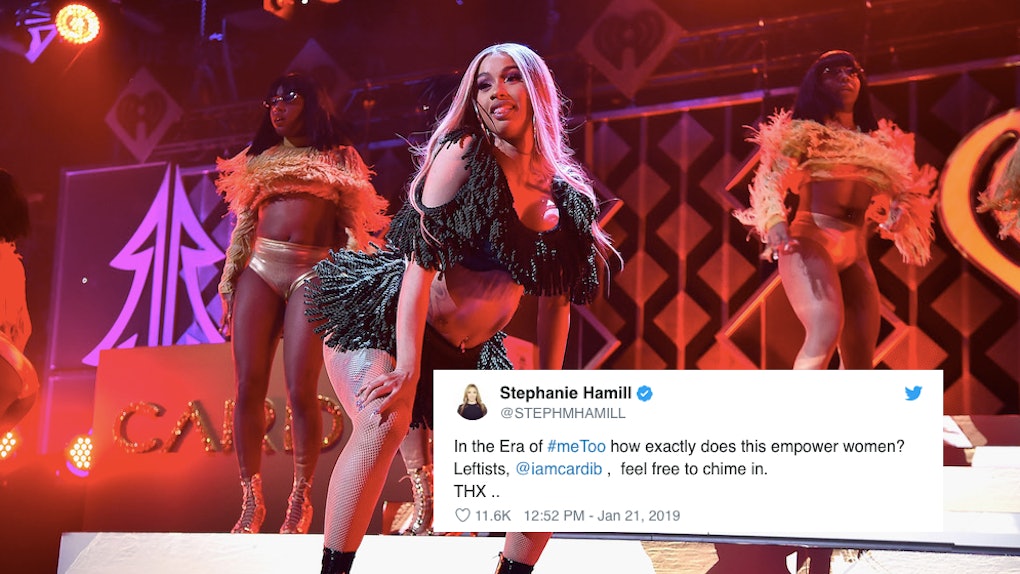 If there's one thing I've learned in life, it's to never, ever underestimate a girl who can twerk. Case in point? Cardi B, naturally, because she absolutely crushed her "Twerk" music video with City Girls, and is making sure that nobody makes her feel anything less than empowered for it. And honestly, Cardi B's response to criticism over her "Twerk" music video is so damn perfect, you'll be bowing down — or maybe even twerking — to the queen herself.

But first, let's start by explaining what exactly goes down in the "Twerk" music video. If the name itself doesn't give you a hint, then I truly don't know what to tell you. So here we go: picture Cardi B in full tiger body paint. Now picture her twerking. Now add in hundreds more women dressed in bikinis and cut-offs and bodysuits all twerking. Twerking on a pole? Yup. Twerking in the sand? You betcha. Twerking upside down? Yes indeed. In all honesty, once you look past the fact that these women are all twerking, they are actually performing feats of strength, flexibility, and endurance, and I am honestly impressed and maybe even slightly jealous.

See all of the headstands, splits, and backflips for yourself, and tell me that this does not make you want to watch it on repeat, if only to envision yourself executing these moves yourself:

But there's one user on Twitter who is telling everyone to hold up, because she feels the video doesn't help to "empower women." On Monday, Jan. 21, conservative writer Stephanie Hamill wrote,

In the Era of #meToo how exactly does this empower women? Leftists, @iamcardib, feel free to chime in. THX ..

Now, look. Everyone is entitled to their opinions, and I totally understand and respect that. But Cardi B took one look at the tweet and decided to respond in the most Cardi B (read: epic) way possible.

"It says to women that I can wear and not wear what ever I want. do w.e I want and that NO still means NO," Cardi wrote on Tuesday, Jan. 22, calling out Hamill by name and writing, "So Stephanie chime in..If I twerk and be half naked does that mean I deserve to get raped and molested ? I want to know what a conservative woman like you thinks":

She tweeted once more shortly after, writing,

All these conservatives been harassing me and telling me the most disgusting things these past few days. Listen I’m not telling ya to turn liberal all I’m saying is to admit that your president is f*ckin up this country right now! Liberal or conservative we ALL suffer as citizens.

FYI: In case you missed it, Cardi B has spoken at length about her issues with President Trump on social media — so much so that Democratic senators were unsure as to whether or not they should retweet her political post on Instagram about the government shutdown.

Hamill responded to Cardi's tweets, agreeing that "no means no, no matter what," but thinks that her video "sexually objectifies women":

Of course, fans are taking to Twitter to share their reaction (which is basically that the girls in this video are just having some good ole carefree fun):

Welp, that settles it for me, you guys.