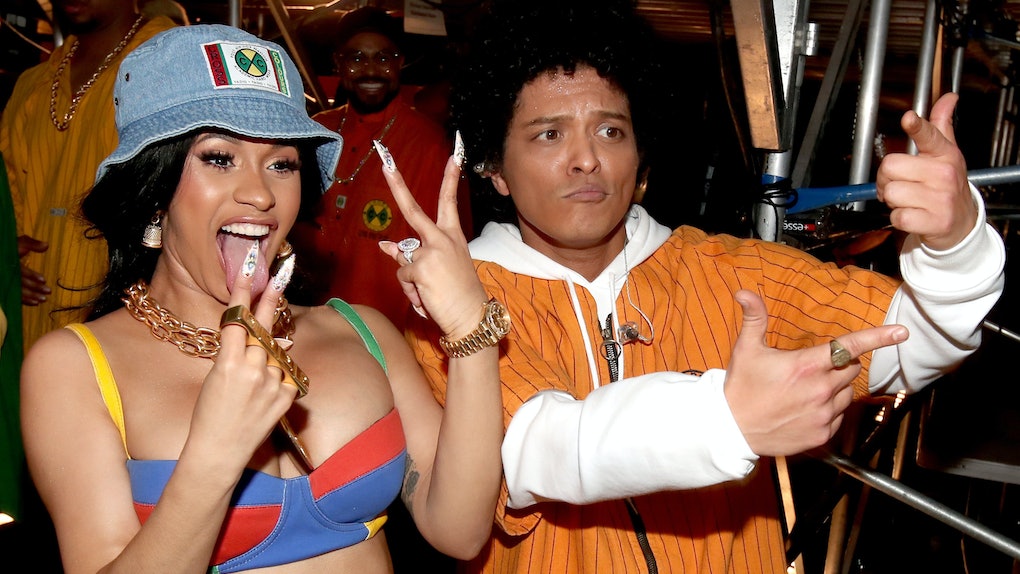 Well, that was fast. After deleting her Instagram following backlash in response to her Best Rap Album win at the Grammys on Sunday, Cardi B is already back on Instagram announcing her next money move. Yup, Cardi B's first Instagram since quitting over Grammy drama is here, and it's teasing a new music collaboration with another Grammy-winning artist.

Cardi made an exit from Instagram earlier this week because of haters online saying she didn't deserve to win Best Rap Album at the Grammys. She posted a video talking about how upset she was at the unnecessary backlash before deactivating her account, which was a sad change of pace from her previous celebratory posts. When people started hating on her win, she started posting screenshots of the words of support she was getting from other rappers as well. Even Nipsey Hussle, who was nominated alongside Cardi, posted on Instagram congratulating her on the win.

Then she reached her wits' end and posted this video before deleting her account.

I worked hard for my motherf*cking album. I f*cking worked my ass off, locked myself in the studio for three months ... didn’t go to sleep in my own bed, sometimes for four days straight — pregnant!

The video has since been deleted despite her Instagram being active again.

She returned to Instagram on Feb. 13 to announce that she and Bruno Mars have a new song together dropping this week.

"Ok so I’m back from retirement to announce I have a brand new song coming out Friday at midnight with @brunomars. #twogrammywinningartist," she said in her post. The photo shows her and Mars standing close together that'll definitely remind you of the "Finesse" remix. Mars posted the same photo to his Instagram and said the song will be released on Friday, Feb. 15.

Fans on Twitter are happy to see Cardi is back on the 'Gram and releasing new music.

Y'all, can we agree to not push Cardi to the point of quitting Instagram ever again? The woman made history as the first-ever female solo artist to win Best Rap Album. Can she bask in that glow without being trampled on?!

One of the many artists who came to Cardi's defense was Lady Gaga, whom Cardi is a big fan of and finally got to meet at the Grammys on Sunday. Gaga, who won three Grammys of her own that night, took to Twitter on Feb. 12 to defend Cardi's win.

"It is so hard to be a woman in this industry," Gaga tweeted. "What it takes, how hard we work through the disrespectful challenges, just to make art. I love you Cardi. You deserve your awards. Let’s celebrate her fight. Lift her up & honor her. She is brave."

You hear that?! Leave Cardi alone!!