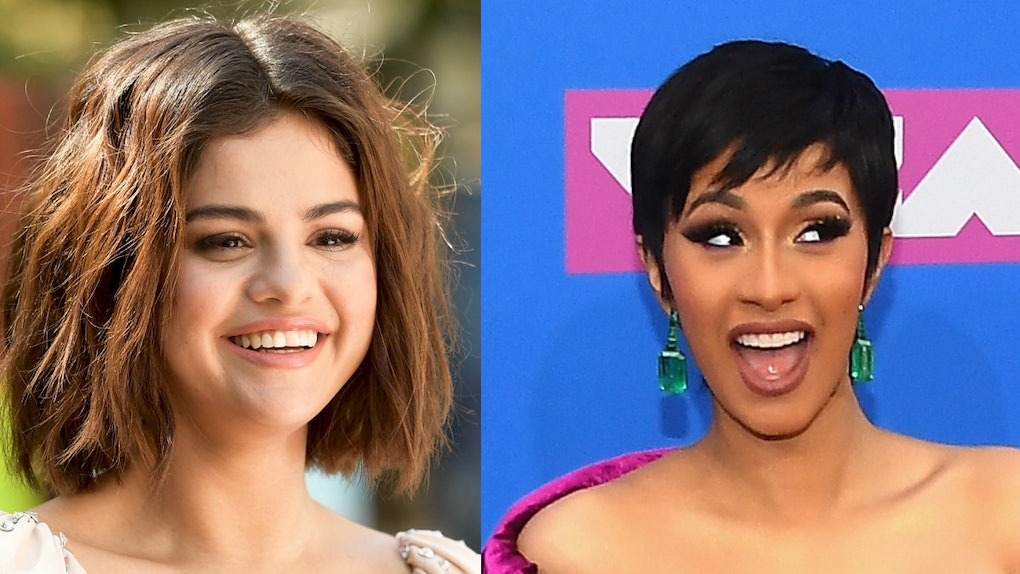 Cardi B & Selena Gomez Hinted At A Possible Collaboration, Which Has Fans Losing It

The speculation started on Friday, Aug. 24, when Cardi B, Gomez, and fellow singer Ozuna partnered up to shoot a music video for DJ Snake's new song, per E! Online. Gomez shared a glimpse of the shoot with several fun photos and videos on her Instagram Story, which has everyone (self-included) freaking out. The four are shown sporting red outfits, and one particular video shows her and the "Bodak Yellow" rapper hugging. Right before the video cuts, Gomez faintly whispers, "I hope you guys like our song," to which Cardi exclaims, "It's poppin!" Did you guys hear that? Gomez said "our song" and Cardi used the catchphrase she always uses when something of epic proportions is happening. Sounds like this collaboration might be a real thing.

Cardi further fueled the speculation with a series of her own photos that she shared to Instagram. One image shows four director's chairs bearing their names. Another shows her hugging Gomez, which she captioned, "The sweetest girl in the world @selenagomez ❤️"

Cardi B also shared a video on her Instagram on Saturday, Aug. 25, in which she said, "I just finished filming this video for DJ Snake, featuring Ozuna and Selena Gomez." "I love this song. I love this video. Ya'll gonna love this record — I love it," the new mom continued.

I don't know about you, but that Cardi B vid makes me believe that this collab is very real — I mean, they even filmed a video!

Fans are pumped, too.

The reported collaboration would be one of Cardi B's first since welcoming her and husband Offset's daughter, Kulture Kiari Cephus, back in July. While the Invasion of Privacy rapper initially planned on hopping back into the music world immediately after the birth of her daughter, she later expressed that she wasn't ready to leave Kulture behind so quickly. Her comments came on July 26 after she backed out of Bruno Mars' 24k Magic Tour, in which she explained:

As of today I've decided I won't be joining Bruno on tour this Fall. I thought that after giving birth to my daughter that 6 weeks would be enough time for me to recover mentally and physically. I also thought that I'd be able to bring her with me on tour, but I think I underestimated this whole mommy thing.

Not only am I just not ready physically, I'm not ready to leave my baby behind since the doctors explained it's not healthy for her to be on the road. I hope you guys understand that this decision has been the hardest to make but I have to do what's best for myself and my baby! Thank you Bruno for being so supportive and understanding.

Although Mars himself understood Cardi's decision to leave the tour, some of her fans were super upset and aired their frustrations outline. Things got so intense that she made a video defending her decision on Aug. 15.

Maybe with this very likely possibility of a collaboration with Selena-freaking-Gomez, all will be forgiven. TBH, I'm already all over this possible collab, and I can't wait to see how this unfolds.