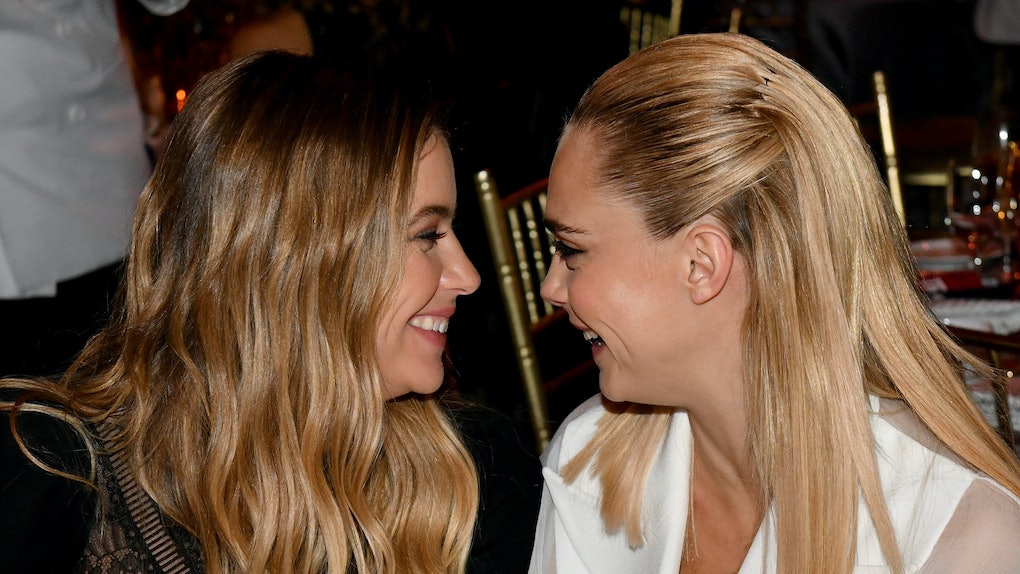 If you're a fan of rom-coms, Cara Delevingne's quote about meeting Ashley Benson on the set of Her Smell is going to be an absolute delight as far as you're concerned. “We weren’t looking for it,” Delevingne said in an interview with Marie Claire published Aug. 13. “It was really just very authentic and natural.” For those of you who aren't rom-com aficionados, let me give you a little rundown on what makes Delevingne's quote so rom-com-worthy: the plot to pretty much every romantic comedy ever is one person just "isn't looking for love" when it comes knocking at its door.

In addition to their rom-com-worthy meeting, the interview also shed some more light on Delevingne and Benson's primarily private relationship. For starters, Marie Claire said Delevingne showed up to her interview with both of her own dogs, Leo and Alfie, but she also gushed about Benson's dogs, saying that they were "f*cking adorable" and that they had the "f*cking calmest dispositions." The reporter noted she believed Delevingne might have been "doing some emotional transference" when describing Benson's pups.

I mean, if gushing about how much they love your dogs during an interview with one of the largest publications in the world isn't love, I don't know what is.

Later on in the interview, Delevingne also addressed that time she and Benson were spotted carrying a super NSFW package into their house in May. More specifically, the NSFW contained a super sexy $385 "Master Series Obedience Extreme Sex Bench with Restraint Straps." The manufacturer describes the expensive piece as a “heavy duty piece of sex furniture” that will allow you to go “deeper than ever before!”

When the topic of bringing the term "sex bench" into the lingo of everyday Americans comes up in the Marie Claire interview, the reporter said Delevingne simply rolled her eyes ad said “Definitely not on purpose.” That being said, Delevingne, who's known for being extremely open about sex, is still committed to being super sex positive. “I’m not just talking about sex for sex. I’m talking about experience, whether it’s abuse or confusion, positive or negative," she told Marie Claire, even adding this awkward anecdote about the time her mom tried to give her The Talk when she was 14: “My mom decided to tell me that Father Christmas wasn’t real. And in the same conversation, she said, ‘By the way, let’s talk about the birds and the bees.’ I was like, ‘This timing is terrible.’”

OK, two more cute tidbits about Benson and Delevingne's relationship from the interview and then I promise I'll leave you alone. And both of the tidbits take place on the same night: the Trevor Project’s fundraising gala, where Delevingne was being honored with a Hero Award for her support of the organization’s mission to stop LGBTQ youth suicide. The first tidbit I adored from this night was that Delevingne, who was nervous about performing live at the event, was picking at her own salad and also scooping up "avocado from Benson's plate with bits of breadstick."

I know it's a very small piece of information, but there's something just so adorably ordinary about nervously eating food off of your partner's plate. Like, yes, they're one of the most major celebrity couples currently in the spotlight and, yes, they can casually afford to drop almost $400 on a sex bench, but at the end of the day they're just humans who share food and get nervous.

The second thing I loved about this night was a little less ordinary; it was the shoutout Delevingne gave Benson in her acceptance speech: “She’s one of the people who helped me love myself when I needed it most," she said.

Aww. Did you see that? True love is out there, people!