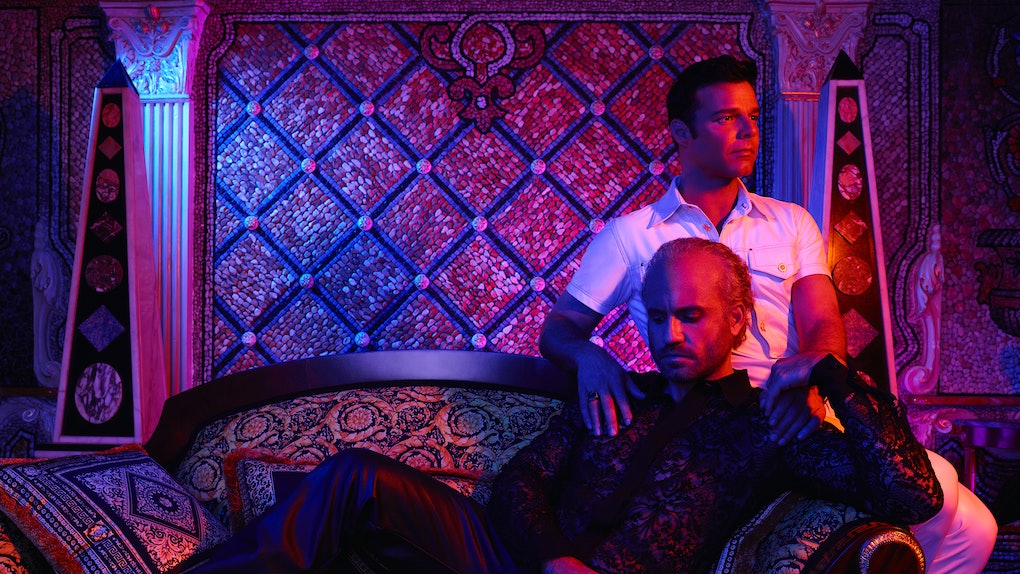 Too often, I fall in love with certain scenery in a film or TV show, but when I look up info on the actual place, it turns out that the location was on a L.A. soundstage somewhere. Womp, womp. However, one recent incredible TV location that is totally valid is Versace's mansion, which was the actual filming location for the designer's domestic scenes of The Assassination of Gianni Versace: American Crime Story. Fans of the lavish life may have been envious of the setting, but good news: You can stay at the Versace Mansion, but for a lofty cost.

The Miami Beach estate, known as The Villa Casa Casuarina, was originally built in 1930 and used as an apartment complex after the owner died in 1937. As decades went by, the house grew shabby, but that didn't stop Gianni Versace from falling in love with the property when he first noticed it in 1992. He bought both the house and the lot next door to include a garden, swimming pool, and additional wing alongside the original building. After Versace's 1997 murder on the outside steps of the mansion, the house was vacant until his sister Donatella sold it in 2000. The property was finally reopened as a hotel in 2015, and I'm sure the staff is expecting a huge increase in bookings now that Versace's story is on TV.

The Villa is currently advertising three different kinds of room options: the One Bedroom Suite, the Exceptional Suite, and the Superior Suite. Interested guests can select one of several options in each suite category, likely picking based on the unique features in each room. The mansion's one bedroom suites, starting at $1,199 per night, include rooms with elaborate balcony and garden views. Looking at the photos of these private rooms, I'd guess it's easy to feel like royalty after a night spent there, and it's obvious why American Crime Story executive producer Ryan Murphy felt that his team had to film there to capture Versace's true spirit.

The Exceptional Suite and Superior Suite rooms, billed from at least $999 and $749 per night, appear a little less extravagant. While photos seem to show smaller spaces than the one-bedroom suites, I genuinely don't see much else of a difference. Bargain (ish) deals, then?

The Villa also runs an Italian and Mediterranean restaurant called Gianni's, with executive chef and Le Cordon Bleu graduate Thomas Stewart at the helm. If you're trying to sneak a look at the mansion without paying for a room, eating at the restaurant is a possibility if you're willing to drop some cash. The dinner menu includes $15 to $32 appetizers, while some of the bottles of wine are over $1,000. Given the ornateness of the mansion, which also includes a spa and gym, this isn't really surprising, but for what the experience is, a lot of dinner options are fairly reasonable. The restaurant also offers gorgeous-looking poolside seating.

Those interested in booking a stay at the Versace Mansion seem to be in luck — when I checked, the calendar was suspiciously open, not showing completely unavailable days until this August. Granted, only the most expensive rooms seem to be free this year, but after the run of American Crime Story, I wouldn't be surprised if some millionaires descend upon the mansion sometime soon. Special package deals for vacations there are also offered. The property is also available as a wedding venue, which would definitely satisfy some of your Pinterest photo goals.

Speaking of Pinterest, if a visit to the Versace Mansion is limited to your travel bucket list for now, you can live vicariously through the new season of American Crime Story. The Assassination of Gianni Versace airs on Wednesdays on FX at 10 p.m. ET.