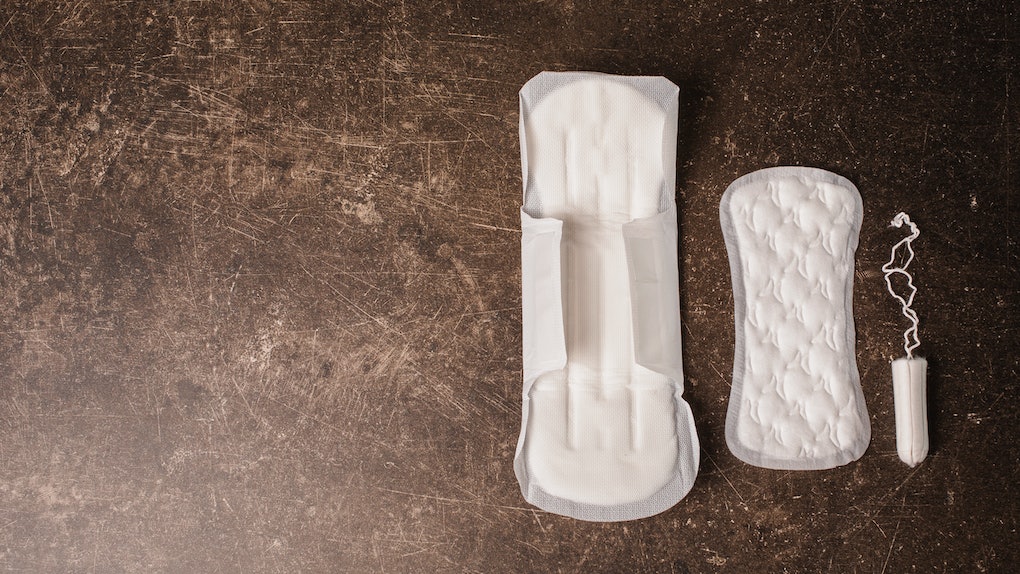 Can You Sleep In A Tampon? 4 Things You Should Know Before You Go To Bed Without Taking Yours Out

Sleeping with a tampon in is often equated to other self-destructive decisions we all may or may not be guilty of making in life, like texting while driving or drinking coffee at night. If you do it, bad things will happen to you — or, at least, this is what we have been led to believe. There are certainly health risks to consider whenever you keep a tampon in for longer than about nine hours, but can you sleep in a tampon overnight without cause for concern?

The main reason people worry about sleeping with tampons in is because of the fear of contracting toxic shock syndrome (TSS), which is a rare, life-threatening disease that is most commonly associated with women who leave tampons in for too long. In truth, TSS is a bacterial complication of strains of staph, which already have to be in your body in order for it to manifest. According to Mayo Clinic, the bacteria finds a home within a bloody tampon, which is why incidences of TSS dropped substantially when manufacturers pulled super absorbent tampons off the market, therefore forcing women to change their tampons more frequently.

Even if you keep a tampon in for too long, you would also need to have the strains of staph present in your system for TSS to occur. This is why it's way less important to worry about sleeping with a tampon in, and way more important to think about it as a constant awareness of how long you're keeping your tampon in in general.

The connection between sleeping with a tampon and contracting TSS may be slightly overblown, but that doesn't mean you should throw a tampon in every night and cruise into a 13-hour slumber. Here are four things to keep in mind before you go to bed with a tampon in.

1. It Depends On How Long You're Planning To Sleep

Basically, as long as you're consciously aware of putting your tampon in and how long you intend to keep it in there, it's really not that big of a deal.

The average adult sleeps about seven hours, which is well within the amount of time you can reasonably keep a tampon in.

2. It May Not Be Such A Good Idea On The Weekends

A good strategy you can apply to figuring when you should or shouldn't put a tampon in is to only do it during weeknights, and to switch to pads for the weekends. On Friday and Saturday nights, you're way more likely to sleep nine to 11 hours before waking up, and if you're on a binge-sleeping marathon, you definitely shouldn't keep a tampon in that entire time.

Then again, if you're feeling the need to sleep 11 hours on the weekend, that might be a sign that you need to get a little more sleep throughout the week in general.

As noted above, TSS is not nearly as common and directly correlated to tampon usage as some people make it out to be. The rate of occurrence for toxic shock syndrome is about one to two people per 100,000 menstruating women, and you need to have strains of staph present in your system for it to manifest at all.

With that said, given that TSS is something you can 100 percent prevent from happening through tampon usage as long as you're careful, be. Freaking. Careful. Staying on top of your hours is a simple cost for keeping yourself healthy.

4. Use The Lightest Absorbency Level For Your Flow

This is something that most of us just don't talk about enough when it comes to using tampons in everyday life: The instinct to use a super absorbent tampon just because it'll last longer is not the right way to approach your period. According to Dr. Sherry Ross, using the lightest absorbency level possible for your flow will minimize your risk of getting infected. She told Teen Vogue, "The general rule of thumb is to change your tampon every four to eight hours."

Since you should be switching your tampon before eight hours' time anyways, there's nothing wrong with using a lighter absorbency tampon that requires you to switch it out more often. In fact, that'll force you to stay more on top of your tampon usage, and prevent you from letting one stay in for 10 hours or more.

More like this
These 40 Clever Vaccine Selfie Instagram Captions Deserve A Shot On Your Feed
By Rachel Chapman
23 Instagram Captions For Sunflowers That'll Instantly Brighten Up Your Day
By Jasmine Vaughn-Hall
The Netflix Reality Show You Should Watch, Based On Your Zodiac Sign
By Chelsea Jackson
Stay up to date