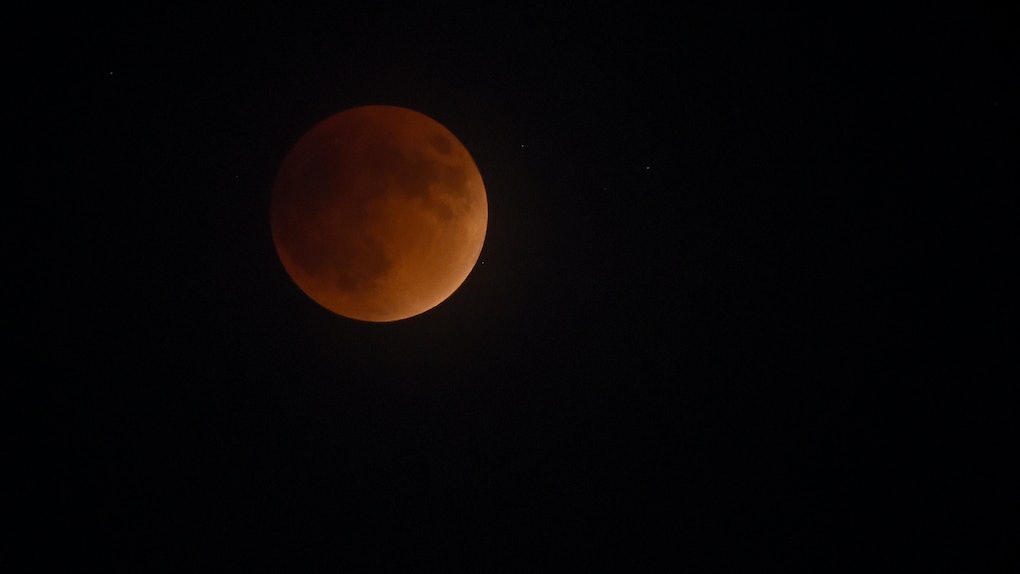 Can You See The Super Blue Blood Moon In The U.S.? It's Complicated

Have you already forgotten all of the astronomy lessons you prepped yourself with before (safely) taking in the solar eclipse last summer? I'm right there with you, but there is no time to waste because there is a lunar event happening so soon that you will not want to miss. To get the ball rolling, it's important to first ask if you can see the super blue blood moon in the U.S.

The answer is that yes, you can see it... kinda. As with most good things in life, there is a catch when it comes to your ability to see the super blue blood moon with your own two eyes. The "trifecta" — as NASA calls it due to the fact that it will be a "supermoon" (the moon is closer to Earth in its orbit), a "blue moon" (the second full moon of the month), and a total lunar eclipse (when the Earth's shadow will give the moon a reddish tint) — will take place on Jan. 31, and the lucky viewers of this 150 years-in-the-making event will be located in the western part of North America, Alaska, and the Hawaiian islands, according to NASA.

You're not totally out of luck if you're an East Coaster, though. While you'll be able to see some of the super blue blood moon, the tricky part is the total lunar eclipse, of which the West Coast contingent will get the best viewing.

Since the eclipse begins at 5:51 a.m. ET, New Yorkers and fellow East Coast dwellers will have their view somewhat hindered by the already lightening sky in their time zone (bummer). With that, though, Gordon Johnston, the program executive and lunar blogger at NASA Headquarters in Washington, says that they best time for the East Coast to have their best view possible of the super blue blood moon is 6:45 a.m. ET — the perfect time to enjoy a latte with your super blue blood moon.

Johnston has better (albeit earlier) news for residents of the West Coast, Alaska, and Hawaii since he says that they'll have "a spectacular view" of the lunar eclipse in its totality from start to finish. The best time to take advantage of your viewpoint, if you're one of the chosen total-eclipse-seeing residents, is between 5 a.m. and 6 a.m. PT. The totality phase of the lunar eclipse will have passed by about 6:05 a.m. PT, so make sure you convince your West Coast bestie to be an early riser for the day (so you can have all the FOMO later, of course).

Since the U.S. is more than only the west and east coasts (it's true, you guys), Johnston also offers up the best viewing times for the Central Time Zone and those keeping their watches by Mountain Standard Time.

Midwesterners will be able to get a little better view than their East Coast neighbors (since the moon will be higher in the western sky), so take advantage of this rare upper-hand over your "cooler" coastal neighbors and get outside between 6:15 a.m. and 6:30 a.m. CT — your best chance to see the Earth's reddish shadow on the moon. Just one time zone over, 6:30 a.m. MT will be the best time to see the peak of the blood moon eclipse.

Even though different parts of the country will be treated to different degrees of the total lunar eclipse, there is one piece of advice that Johnston has for all potential super blue blood moon watchers: get to higher ground facing the west to create the clearest vision-path possible.

To clarify exactly what you'll be seeing on Jan. 31, the super blue blood moon gets its name because it is the third in this latest series of three supermoons (the first two being Dec. 3, 2017 and Jan. 1, 2018); it is a blue moon thanks to the fact that it is the second full moon of January; and since the super blue moon will experience a total lunar eclipse by passing through Earth's shadow, it will take on a reddish tint (AKA "blood moon"). Combining all three factors gives you the elusive super blue blood moon — which hasn't happened in more than 150 years, according to Space.com.

If you don't want to miss out on the super-cool super blue blood moon, take note of your time zone's best viewing time and mark down your early wake up call for Jan. 31 in your calendar. Maybe make a note to stock up on coffee for the morning, too.