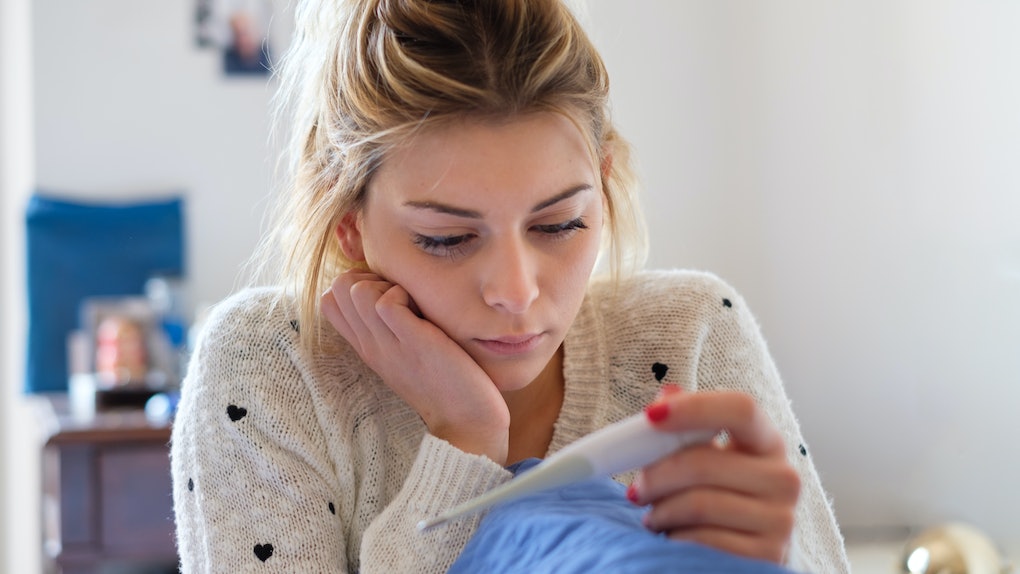 Can You Get Your Period & Still Be Pregnant? PMS & Pregnancy Symptoms Are Surprisingly Similar

Pregnancy scares can be terrifying, especially when you’re nowhere near ready for mom life. But things happen, contraception isn’t always effective, and of course, this is when our bodies fluctuate just enough to freak us the f*ck out. Some months you get your period on time, while others it shows up whenever it feels like it. There’s a good chance you’re not pregnant, but can you get your period and still be pregnant? In short: No, you can’t.

You can, however, still bleed when your eggo is preggo. But it’s not technically considered a period. Elite Daily spoke with Dr. Sherry Ross, OBGYN and author of She-ology: The Definitive Guide To Women’s Intimate Health to get to the bottom of what's really happening in your body if you're still bleeding down there when you’re technically pregnant. After all, we’re taught from a young age that when the female body bleeds or spots, it's some form of menstruation. When a woman is pregnant, however, depending on which trimester she’s in, it’s either a case of implantation bleeding, or potentially a sign of miscarriage.

Implantation bleeding is fairly common, occurring in 30 percent of pregnant women and happens around the time you would expect your next period — day 24 to 26 of your first trimester.

Rule of thumb: If all signs lead to a baby, but you’re experiencing what appears to be a light period, it’s always a good idea not to self-diagnose and, instead, double check with tests and a trip to the doctor.

And, unfortunately, this isn't the only sign of pregnancy that can be misleading.

You’d think all signs pointing to pregnancy would be flashing-red-light obvious, considering you’re literally growing a miniature human inside your uterus. But, somehow, that’s not always the case. Our bodies like to play coy sometimes, I guess.

So while our bodies get the last laugh, we’re stuck in the in-between, blindsided by symptoms that could mean one thing, and not the other. Take fatigue, for example. You’re clocking in part-time hours at work, juggling a demanding class schedule, and squeezing in time for social activities with bae and the bestie. It’s not surprising that under these circumstances, you’d feel outrageously exhausted. But apparently, feeling all the sleepy feels could be an early sign of pregnancy.

Board-certified gynecologist and medical director of Women's Health Care Maria Sophocles told Cosmopolitan that an unusually overwhelming spout of fatigue is a sign you’ve got a bun in the oven. So, even though you may be busy around the office or on campus, this type of tired is unlike any other.

Fatigue is also a symptom of PMS, which makes this so-called red flag even more difficult to interpret as a sign of pregnancy. Ironically enough, though, a lot of subtle signs of pregnancy mimic our menstrual cycle taking its usual course. Indicators such as minor cramping, nausea, and breast tenderness/growth play both sides of the spectrum, which means it’s really important to pay close attention to contraception discrepancies, and how they line up with your body’s behavior.

And if those aren't enough of a stretch for you, your skin can show signs of pregnancy, too.

Skin traumas are enough of an issue in and of themselves, without the added stress of discoloration possibly pointing the finger toward pregnancy, amirite? But alas, there are a number of ways pregnancy shines through the skin, and judging from how it fluctuates, I can guarantee when your complexion’s having an odd moment, the idea of having a baby would never be your first guess why.

For starters, there’s such thing as “mask of pregnancy,” and FYI, this isn’t some sort of cutesy sheet mask you’d find on the shelves of Sephora. According to the American Pregnancy Association, mask of pregnancy, otherwise known as melasma and chlosma, causes dark pigmentation to appear along the forehead and cheeks. If these types of splotches start to form, don’t be so quick to call your dermatologist. This might be a case for your OBGYN, instead.

An even more subtle skin trauma to raise an eyeball at when you think you might be pregnant is raging hormonal acne. This might be an actual red flag for a few lucky women who rarely break out prior to or during their period, but for those of us whose entire foreheads become infested with blemishes as far as two weeks before their period, this sign can easily be overlooked.

What To Expect reports that around week six of the first trimester, hormonal surges “clog up pores and cause bacteria to build up,” leading to some pretty heinous acne clusters. Even if your skin is well taken care of, and you follow a routine morning and night, the fact that your body is beginning to retain more fluids can also lead to toxins growing a fresh crop of zits on your face, back, hairline, neck, and breasts. Lovely.

So, let me get this straight: Considering these warning signs are actually, in large part, one and the same with period symptoms, it's actually confusing AF to know for sure if you're pregnant or you're simply about to get your period — unless you're hyperaware of your contraception and/or regularly peeing on a stick, of course. Thanks a lot, Mother Nature.