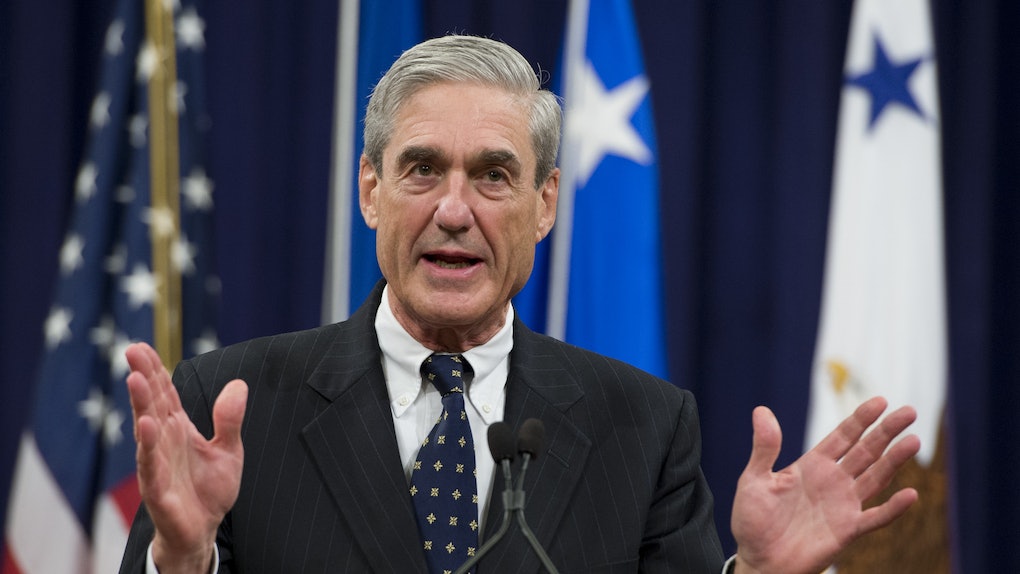 Can Trump Fire Mueller Now? The President’s Lawyers Say He Isn’t Thinking About It

After the Department of Justice's Russia investigation once again became headline news on Monday, Oct. 30, one question related to the investigation became increasingly relevant: Can President Donald Trump fire Robert Mueller? Mueller, the former FBI director who was appointed special counsel earlier this year by the Justice Department — and thus oversees the investigation into possible collusion between Russia and the Trump campaign during the 2016 presidential election — brought charges against two people related to Trump's presidential campaign, including former campaign director Paul Manafort. Mueller also revealed a guilty plea for a third person related to the campaign.

As Trump expressed his displeasure between Monday and Tuesday at the results and coverage of Mueller's investigation, the subject of whether that displeasure would prompt the president to fire the special counsel became part of the coverage itself.

That means those speaking on behalf of Trump have been fielding questions looking for that exact answer.

Attorney Jay Sekulow is one of those people. During a Tuesday morning appearance on ABC's Good Morning America, the Trump representative was asked whether he could rule out possibility of the president firing Mueller. Sekulow answered that "there is no conversation regarding firing Robert Mueller. And there's no basis to fire Robert Mueller."

I will say this, the president has not indicated to me or to anyone else that I work with that he's had any intent of terminating Robert Mueller and the way it would work is, you could only terminate a special counsel for cause and we just don't see any basis for cause.

The same point was echoed by another one of Trump's lawyers, Ty Cobb, who said on Monday, per the Washington Post, that "nothing about today’s events alters anything related to our engagement with the special counsel, with whom we continue to cooperate."

During Monday's White House press briefing, press secretary Sarah Huckabee-Sanders fielded the same question of whether President Trump would consider firing Mueller. She replied that "there is no intention or plan to make any changes in regards to the special counsel," as the president said in the recent past.

The subject of Trump's willingness to fire the special counsel has been a relevant topic not only because of the president's apparent displeasure at the investigation's very existence — never mind the actual proceedings — but also because past reports have indicated that he has indeed flirted with the idea of firing Mueller.

In addition, Trump indicated during an interview with the New York Times that if Mueller began looking into the president's finances that it would be crossing a red line.

Trump does have the means to remove Robert Mueller from the investigation, but he would have to do so via the Department of Justice, since it was the DOJ which appointed Mueller in the first place. As Politico mentions, Trump could hypothetically order leadership at the department to fire Mueller. In the event that leadership refuses, the president could fire them until the next person in charge obliges.

Trump made similar action back in January when he fired acting Attorney General Sally Yates merely hours after it was reported she would not argue on behalf of the president's travel. Yates' replacement, Dana Boente, then obliged with the president's prerogative.