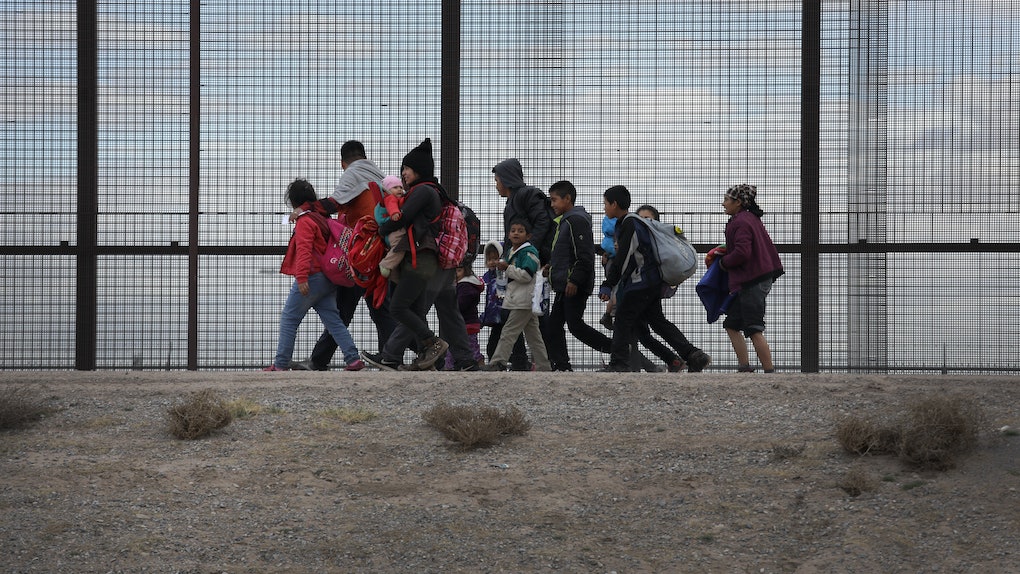 Can States Block A National Emergency? These States Are Already On It

After President Donald Trump announced a national emergency on Friday, Feb. 15 to secure additional funding for a wall on the southern U.S. border, the pushback has been swift. Legal challenges are being taken up left and right seeking to challenge the move. But can states block a national emergency? Apparently it's worth trying, because 16 of them are already filing to do so.

A group of 16 states appeared in court on Monday, Feb. 19 to formally challenge Trump's declaration of a national emergency, according to The New York Times. The coalition of states bringing the lawsuit are California, Colorado, Connecticut, Delaware, Hawaii, Illinois, Maine, Maryland, Michigan, Minnesota, Nevada, New Jersey, New Mexico, New York, Oregon, and Virginia. The lawsuit was filed in the Federal District Court in San Francisco, led by California Attorney General Xavier Becerra. In the suit, the states allege that is it unconstitutional for Trump to divert money to the border wall from other sources because Congress, which controls the nation's budget under Constitutional power, has not authorized that reallocation of funds. Elite Daily reached out to the White House for comment on the lawsuit but didn't hear back as of publication.

Calling Trump's assertion of illegal border crossers a "fake national emergency," Becerra wrote in a tweet that the president's declaration amounted to "a brazen overreach to rob taxpayers" and "an insult to the Democratic principles enshrined in our Constitution."

Trump's declaration, the lawsuit argues, effectively went against the wishes of Congress as the body responsible for allocating national funds. On Feb. 14, Congress passed a spending bill that included only $1.4 billion in funding for improved border fencing, only a fraction of the $5.87 billion he'd requested. But rather than seek additional funding from Congress directly, Trump announced he'd be taking an additional chunk of money from the military budget in order to finance his wall — money that Congress didn't sign off on.

In his speech on Feb. 15, Trump claimed he was authorized to pull money from three other governmental buckets, totaling an additional $6.7 billion on top of the $1.4 billion Congress had earmarked for improved border fencing.

"Contrary to the will of Congress, the president has used the pretext of a manufactured 'crisis' of unlawful immigration to declare a national emergency and redirect federal dollars appropriated for drug interdiction, military construction and law enforcement initiatives toward building a wall on the United States-Mexico border," the lawsuit claims.

"We are in this together," tweeted Oregon Sen. Jeff Merkley. "We must stand up against Trump's reckless power grab."

The disagreement over how much — if any — funding to provide for that line item led to the 35-day partial government shutdown that began in late December 2018 and ended on Jan. 25, 2019. With more than 800,000 federal workers and contractors furloughed or working without pay for more than two paychecks, the shutdown caused financial hardship for many Americans and dealt a blow to Trump's approval ratings. But the president hasn't let up on his push for a border wall, and when it appeared Congress wouldn't give him what he was asking for, he took matters into his own hands.

The legal backlash was predicted; even Trump himself acknowledged as much in his Feb. 15 announcement, saying, "I expect to be sued." The sentiment was echoed in a tweet by Trump on Feb. 18 in which he labeled the challengers "Open Border Democrats" and "the Radical Left."

Becerra told the Times that Trump's own admission about why he was declaring the national emergency would come back to bite him in the lawsuit. "Probably the best evidence is the president’s own words," Becerra told the paper. In his Friday speech, the president said that he "didn't need to do this, but [he'd] rather do it much faster," in reference to the need to declare a state of emergency.

If the suit fails, that doesn't mean that the national emergency is a done deal, as Congress has the ability to stop a national emergency if they choose to vote to end it. However, to override Trump's near-certain veto, it would need some major bipartisan support, which is a long shot at the moment. With all the moving parts, it's more uncertain than ever whether — and how — Trump will eventually get the funding for the border wall he's been after for so long.