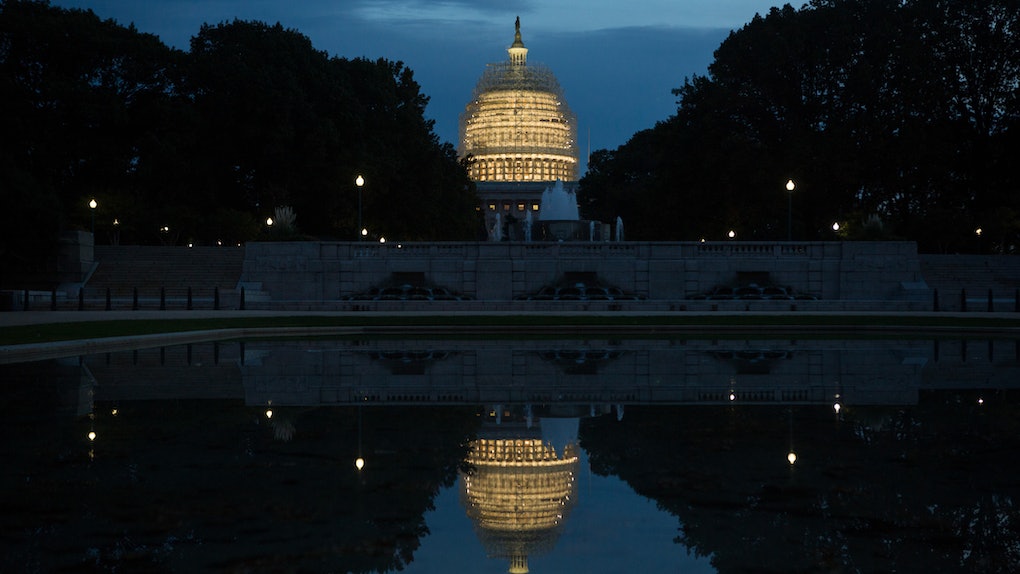 Can Congress Stop A National Emergency? It Would Take Some Real Commitment

Last week, the main concern on everyone's minds was whether a second government shutdown would be kicking off. Fortunately, it looks like that won't be happening, but there's actually a second problem we probably should be worried about. On Friday, Feb. 15, Donald Trump took drastic measures in an effort to secure funds for a wall between the United States and Mexico, but the question is: Can Congress stop a national emergency? It's harder than it sounds.

According to The New York Times, Congress does not have the power to stop the president from declaring a national emergency. However, there is one catch. Under the National Emergencies Act, which allows for declared emergencies to be terminated in certain cases, the Senate and House can reach a joint resolution of termination to end a national emergency if they believe the president is acting irresponsibly or the threat is no longer there. However, both the House and Senate have to be in full agreement in order for this action to go through. According to The Times, if one chamber passes this resolution, the other chamber must bring it to a vote within 18 days. So, even if Democrats control the House at the moment, and are minority in the Senate, they would still need quite a few Republicans to join them in this decision, which could be tricky.

On Friday, Feb. 15, President Donald Trump took everyone by surprise when he declared a national emergency via a live televised broadcast from the White House. Even though the main purpose behind this declaration is to fund the $5.7 billion wall between the United States and Mexico, Trump also touched on quite a few other topics during his speech. He addressed trade deals with China, which included his relationship with President Xi, and he touched on meeting with North Korean Leader Kim Jong-un in an upcoming summit, but it was his comments on immigration that he really tried to emphasize.

Recently, Trump has been attempting to convince the American public that this border wall is necessary by extreme measures, like bringing up stories that aren't always factual. While talking about the wall in his declaration, Trump stated that women were being smuggled across the border and said there is a "tremendous" amount of drugs entering the United States. The White House did not respond to Elite Daily's request for comment.

Trump's decision to sign a national emergency has been severely criticized by the public and political officials. On Feb. 15, just moments after Trump made his declaration, Senate Minority Leader Chuck Schumer and House Speaker Nancy Pelosi released a joint statement condemning the president's actions by calling it "unlawful and pointless." The statement read,

The President’s unlawful declaration over a crisis that does not exist does great violence to our Constitution and makes America less safe, stealing from urgently needed defense funds for the security of our military and our nation. This is plainly a power grab by a disappointed President, who has gone outside the bounds of the law to try to get what he failed to achieve in the constitutional legislative process. The President is not above the law. The Congress cannot let the President shred the Constitution.

No matter where you stand on Trump declaring a national emergency, there's no denying that things have certainly escalated. Perhaps there's a chance the House and Senate can put their differences aside for a moment, but we'll have to wait and see.