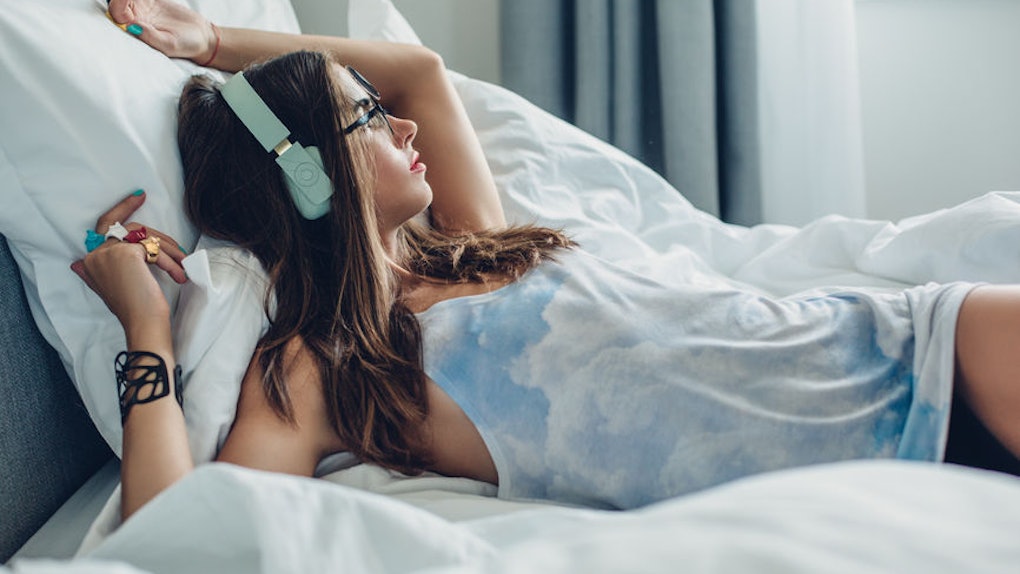 Congratulations, friend: You’ve officially survived the chill of winter and have arrived in the thick of summer. The daylight actually feels warm now, and the sun shines stronger for longer, but as lovely as an extra few hours on the beach sound, I’m daydreaming of summer nights: the cool breeze on the boardwalk, licking my favorite soft-serve cone before it melts over my fingers, crawling into bed at 3 a.m. But if you’re suddenly tossing and turning for a while at night, you may have noticed hot weather can affect your sleep just as much as it does your social calendar. With summer comes vacation, relaxation, and a lot of heat, but the question of how these higher temps can affect your beauty sleep — for better or for worse — can depend on a few things.

Thursday, June 21, 2018 marked the summer solstice, aka the longest day of the year, and the official start of summer. As someone who was well over cold weather by Jan. 2, I was more than thankful to be gaining a few extra hours of sunshine after what felt like the longest winter of my 26 years of life. But while I love spending time outdoors and being able to eat dinner on the patio with the sun still high in the sky, I also really love to sleep, so I wasn’t exactly too thrilled to hear the summer solstice affects sleep in that, the more sunlight your body’s exposed to, the less melatonin (aka sleep-inducing hormones) it produces. Once I put two and two together that more sun equaled less sleep, I started to wonder if the heat itself actually contributed to a lack of Z's throughout the entire summer, not just on the first day of the season.

Even though cool temperatures are ideal for optimal sleep, experts say you actually sleep better in the heat.

It's true that heat can affect your sleep, just maybe not in the way you expect. I know myself, and I do not do well in hot climates; I sweat easily, I feel uncomfortable, because there’s really only so many pieces of clothing you can strip off in public before things get inappropriate — it’s all just a mess, really. In the bedroom, however, a little heat might help you sleep in the long run — but it’s less about the actual summer temps, and more about what they represent that's going to lull you to snoozeville.

Experts at the sleep-tracking/alarm clock app Sleep Cycle tell Elite Daily that, according to data collected via their app between 2016 and 2018, Americans tend to sleep better during the warmer months compared to any other season’s weather conditions. Even though their findings show people tend to hit the sack later in the summer and spend way less time lazing in bed, the experts at Sleep Cycle say the improvement they see in sleep quality likely has to do with a combination of “vacation vibes and air conditioner.” Amen to that.

Basically, the heat affects your sleep by offering you the best of both worlds. When it’s hot, unless for some strange reason you actually enjoy sleeping in Easy Bake Oven-like conditions, you’re probably going to turn up the AC, making your sleep space a lot cooler. Combine that with the chill vibes you’re thriving off of thanks to beach days, vacays, and constant sunlight feeding you all that mood-boosting vitamin D, falling asleep should be a breeze because you feel at ease.

Still, when extremely hot temperatures take over your forecast, you definitely want to cool down your sleep space.

Listen, I know you’re on the grind trying to pay off those pesky student loans, save for a place of your own, and put food on the table. I feel for you, I really do, but do not — I repeat, do not — skimp out on your AC to save money this summer, especially at night, and especially if weather reports say it's going to be a real scorcher.

See, here’s the thing: In order for your body to get optimal rest, your internal thermostat needs to be at a lower temperature. This is all fine and dandy, but according to Chris Brantner, a sleep science coach and founder of SleepZoo, what you may not realize is that it’s harder for your body to cool itself down than it is for it to heat itself up. Ergo, the hotter it is outside your body, the hotter it’s going to be inside, too. For that reason, Brantner says, "it's easier to get to sleep (and stay asleep) when it's cool."

So how can you turn your sleep space into a sleep sanctuary that'll keep you cool despite it being 100 degrees outside? Well, for one thing, you can crank up the air conditioning and turn on all the fans, but aside from taking advantage of any and all sources of cold air, Brantner suggests investing in a mattress that's made with technology to cool you down. "Lots of mattresses, especially memory foam mattresses, are comfortable, but end up trapping body heat," he tells Elite Daily. "The key is to find a mattress that's not only comfortable, but is designed to keep you cool and dispel heat."

Another clever tip Brantner offers is to take a warm shower before bed. Granted, this sounds pretty counterintuitive, but according to the sleep science coach, the hot water is going to do two things: calm you down, for one, and also bring heat to the skin, causing your core temperature to spike, and then drop.

You can't exactly fight science, but you can beat the heat with it. Sleep tight and stay cool, friend!