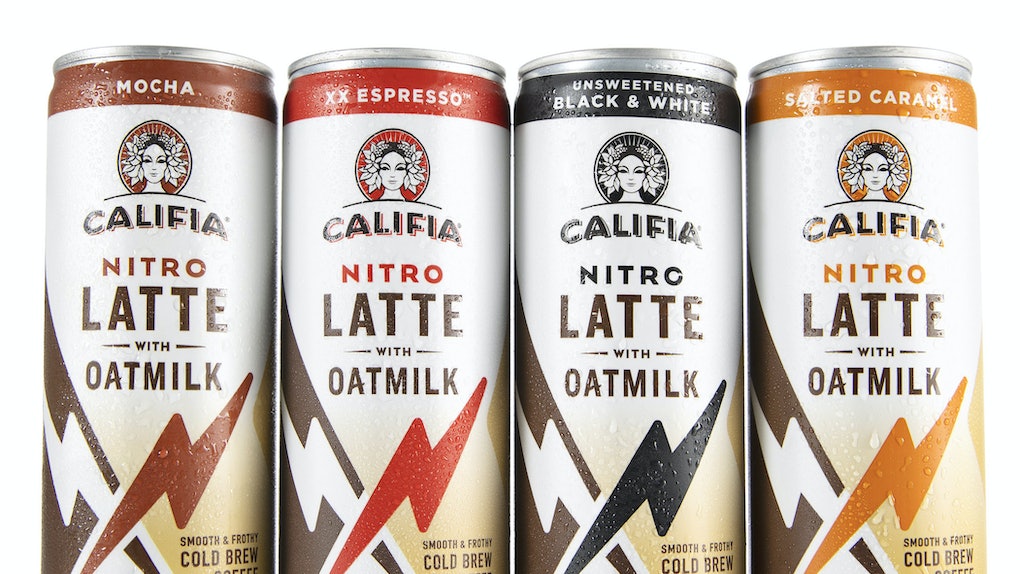 Oat milk has been getting so much hype lately, and for good reason. It's packed with nutrients and fibrous, plant-based protein. Most importantly for those avoiding dairy, oat milk is vegan and dairy free, making it the perfect alternative to cow's milk while still adding a rich and creamy taste to your cup of joe. Upping the ante, Califia Farms just released new canned Nitro Draft Lattes with Oatmilk, and the latest innovation is a convenient pick-me-up that you can carry with you throughout the day. Califia Farms' canned Nitro Draft Lattes with Oatmilk are the perfect non-dairy boost to keep you energized all day.

In a Sept. 24 press release, Califia Farms unveiled their first canned product: shelf-stable Nitro Draft Lattes with Oatmilk. Since the cold brew lattes don't have to be refrigerated until opened (though they are still best served cold), these drinks are the solution to hectic days when you don't have time to stop off at Starbucks to pick up a Pumpkin Spice Latte. Made with allergen-friendly, gluten-free Oatmilk, the vegan beverages come in four different flavors: Black & White, XX Espresso, Salted Caramel, and Mocha.

The cans are definitely the coolest part of the grab-and-go lattes, since they employ some serious high-tech methods to get your drink just right. When you open a Nitro Draft Latte, you'll hear an audible "whoosh," which is the sound of "the specialized nitro widget ... instantly releas[ing] nitrogen into the coffee and froth[ing] the creamy Oatmilk for a rich, delicious brew," per the release.

It all sounds incredibly innovative, but it's reassuring to know that Califia Farms has stuck with good ol' classic coffee made with 100% premium Arabica Beans to make the latte. "We combine these premium beans with our new Oatmilk, a delicious partner for coffee, which froths beautifully. The product is made even creamier with the nitrogen widget technology, resulting in a unique cold brew experience that keeps you 'feel good' energized all day," said Brian Lovejoy, General Manager of Coffee at Califia Farms, in the press release.

You can pick up your shelf-stable 7-ounce Nitro Draft Lattes for a steal at $2.99 per can by ordering them online at CalifiaFarms.com, Amazon.com, and in core U.S. markets. The company will be rolling out more sales through e-commerce, convenience, and grocery stores through the end of 2019, so keep an eye out for that.

There are so many beverages coming out this fall with drinks using oat milk, which is undoubtedly further proof that oat milk is becoming a staple drink for many. Nestle-owned Chameleon Cold-Brew released their seasonal edition Oat Milk Lattes on Aug. 29: Pumpkin Spice and Gingersnap. The wintery flavors are limited-edition products available from September through the holidays, and you can stock up on the cold brews at Target and Whole Foods Market stores nationwide. After the holidays are over, you can still indulge in the classic Original and Dark Chocolate flavors, which are sold year round.

With plant-based milk becoming more and more popular in the country, there's no better time to add it to your morning routine. Seeing as though there's no pumpkin-flavored option in the new Califia Farms lineup, the Salted Caramel Nitro Draft Latte with Oatmilk might be just the fall flavor you're looking for. Cheers!