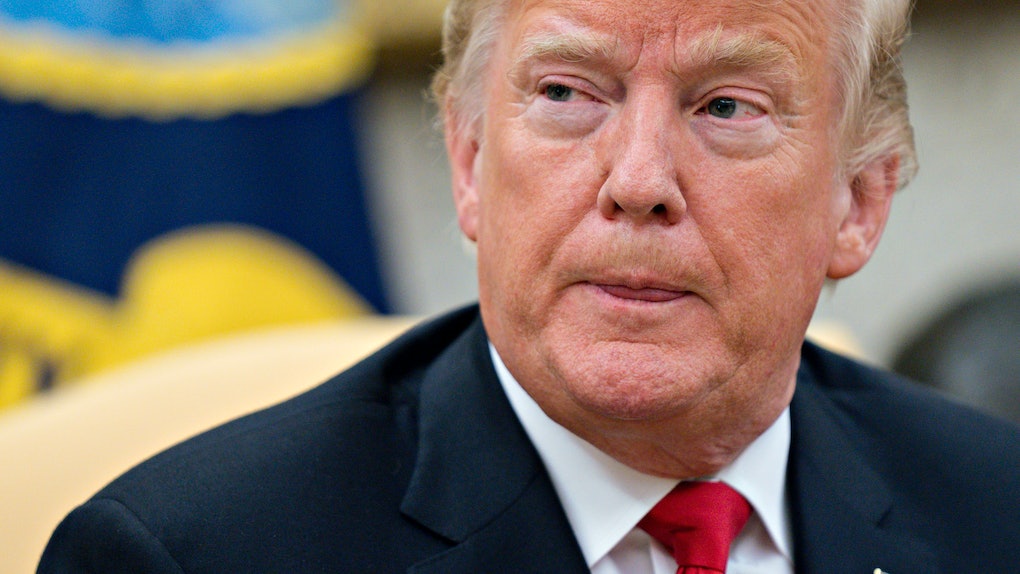 Burger King's Tweet To Donald Trump Roasted Him Over A Typo

Regardless of the side-eye he's gotten for it, President Trump is happy with the fast food buffet he served to the Clemson University football team on Jan. 14. The president has repeatedly raved about the dinner on his Twitter page, but now his tweets are getting called out for one embarrassing reason: a typo. If you haven't seen Burger King's tweet to Donald Trump, specifically, about this ordeal, it's the best thing you'll see all week.

On Jan. 15, the famous burger chain went after Trump for misspelling "hamburgers" in one of his posts about the feast. In a Tuesday morning tweet, which has since been deleted, Trump wrote:

Great being with the National Champion Clemson Tigers last night at the White House. Because of the Shutdown I served them massive amounts of Fast Food (I paid), over 1000 hamberders etc. Within one hour, it was all gone. Great guys and big eaters!

Excuse me? Hamberders? Yeah, even Burger King couldn't let that one go. Shortly after the tweet, the restaurant downright roasted Trump for the error, writing on Twitter, "due to a large order placed yesterday, we're all out of hamberders. just serving hamburgers today."

Oof. Well, at least Trump corrected himself. The White House did not immediately respond to Elite Daily's request for comment.

But this is only one of several times Trump has gotten roasted for matters tied to his apparent dollar-menu-inspired feast. If you haven't seen it, the president gathered food from a bunch of fast food restaurants — McDonald's, Wendy's, Burger King, and others — for the Clemson Tigers, which was visiting the White House to celebrate its victory at the 2018 College Football Playoffs, and people have been going in on him for it nonstop. While Trump has said he was basically forced to choose fast food for the visit, considering the government shutdown affected his residence staff, people aren't letting him slide.

Elite Daily reached out to the White House for further comment on the feast, but did not hear back by the time of publication.

It could be a while before the White House staff are back to cooking hamberders, err, I mean, hamburgers — or anything for that matter. Though Trump has said "nothing else" will end the partial government shutdown (which is now the longest in American history and has left some 800,000 without paychecks) besides the $5 billion-plus he wants for a wall at the U.S. southern border, Democrats have firmly stated that they won't be coughing up anything more than the $1.3 billion they've already offered him. He's been trying to force their hands, threatening to keep the government closed for "years" if that's what it takes to get the OK on wall funding, but, well, they aren't budging.

At least he's got leftover chicken nuggets and fish sandwiches to hold him over in the meantime, though. We'll see how long it takes before his staff gets back to cooking things up in the White House.