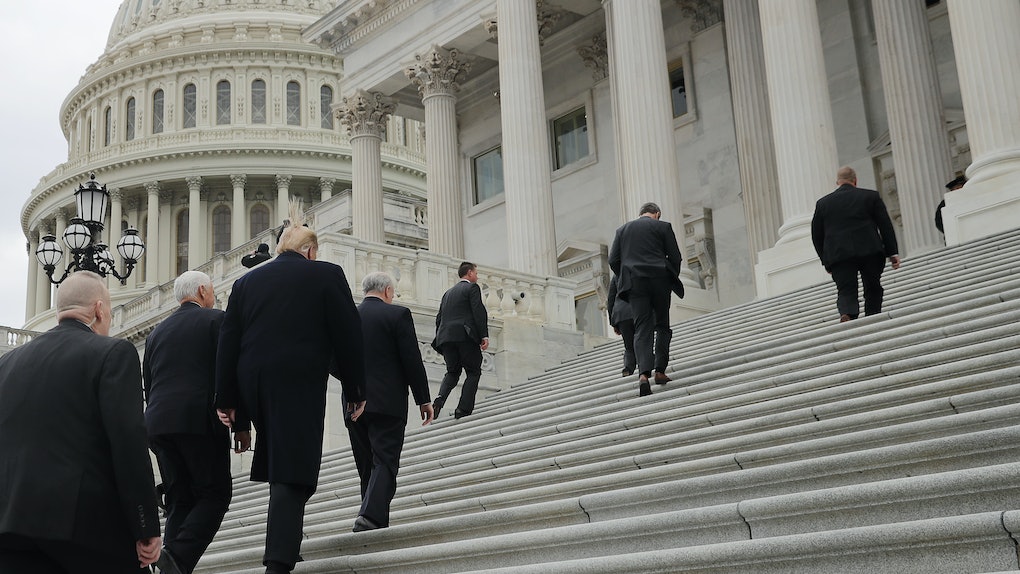 What Are The Long Term Effects Of The Government Shutdown? It's Getting Serious

Well everyone, we've officially entered our third week of the partial government shutdown, and it doesn't seem like it's ending anytime soon. Since the shutdown started on Saturday, Dec. 22, everyone has been waiting for a compromise to be reached. However, as of now there's no sign of stopping, so you might be asking: what are the long term effects of the government shutdown? Spoiler alert: It looks like things are only going to get harder.

According to USA Today, as of Jan. 10 the shutdown that started on Dec. 22 is the second longest-running government shutdown in United States history, with chances of it becoming the longest-ever by Saturday, Jan. 12. Probably the biggest effect is the impact on the some 800,000 federal workers who are not being paid. About 380,000 federal workers are home with no pay, while the remainder — dubbed "essential" employees who work in fields like law enforcement, air traffic, and corrections, are working with no paychecks.

However, that's far from the only effect. The longer the government shutdown stretches, the more effects are being felt, including from agencies that have depleted their reserve funds. While many national parks were initially open without staff, the government shutdown has since forced the parks to deny entrance to visitors, and many national parks have already endured lasting damage due to lack of maintenance, according to National Geographic. In addition, museums have been forced to close their doors during the shutdown, along with a number of national monuments. Other repercussions during the shutdown, per The New York Times, include the Federal Emergency Management Agency (FEMA) issuing a "stop work" to government contractors on Dec. 26, 2018, and the Food and Drug Administration (FDA) stopping "routine establishment inspections" and safety inspections of some kinds of food. In a series of tweets on Jan. 9, the FDA's commissioner, Dr. Scott Gottlieb, said that the agency was working to expand inspections to make sure high-risk food facilities were being checked.

You can't even escape from the shutdown. Since Transportation Security Administration (TSA) agents are among those not being paid, many workers are reportedly calling in sick, forcing travelers to change their plans.

TSA provided a statement to Elite Daily on Jan. 9 that denies any significant increase in the number of callouts, and thanked the agents who have been working through the shutdown. "TSA wants to echo the positive sentiments of industry and the traveling public who have recognized the dedication of the more than 51,000 officers across the country who remain focused on the mission," the statement says. It continues,

TSA data shows approximately a 1 percentage point uptick in call-out rates compared to this time last year. This statistic does not comport with the unofficial and anecdotal narrative others have been providing to media outlets. To be clear, there has not been a significant increase in call-out rates to date. ... There has been no degradation in security effectiveness and average wait times are well within TSA standards.

Elite Daily reached out to the White House for comment about federal workers not being paid, and whether the shutdown should end soon, but did not hear back in time for publication.

But if this government shutdown continues, things could get even worse. For one, hundreds of thousands of federal workers will miss their first paycheck starting Friday, Jan. 11, and if it continues possibly their second paycheck on Jan. 25, per The New York Times. Secondly, federal district courts could run out of funds, which will lead civil cases to be suspended or postponed (although, per the Times, criminal cases will continue). Finally, even though the Department of Agriculture has stated that food stamps will continue through the month of February, if the government shutdown continues past that, there's a good chance that aid could be cut as well.

And it's possible that it will go on that long. Despite many Americans' lives being affected by this shutdown, Trump stated during a Jan. 4 meeting that the government shutdown could go for "months or even years," according to Senate Minority Leader Chuck Schumer, which Trump himself later confirmed. So, that's great.

Not only that, but Trump has also made some other serious threats in order to receive the more than $5 billion funding for a border wall between the United States and Mexico. On Jan. 4, the same day as the meeting with Schumer, Trump threatened to declare a national emergency in order to get his border wall. Elite Daily reached out for comment on Trump's threats at the time, but did not hear back. Once news got out that Trump was considering this threat, the president confirmed this idea during a press conference when asked about it from a reporter.

Then, another reporter asked Trump whether this move was made as a threat, to which Trump responded: "I never threaten anybody. But I am allowed to do it." Safe to say, a long drawn out pause immediately followed that statement.

It may be possible — according to the Title 10 U.S. Code — if the president declares a national emergency then the Secretary of Defense would have the power to "undertake military construction plans" at their direction to support military forces, although there are limitations on what kinds of funds any project could pull from, and the move would be almost guaranteed to see a legal challenge. So, there's a chance Trump would have to battle out that request too.

Believe it or not, there's a good chance that we're about to live through the longest government shutdown in our country's history. This is impacting hundreds of thousands of people's lives and income, so hopefully change will come soon.