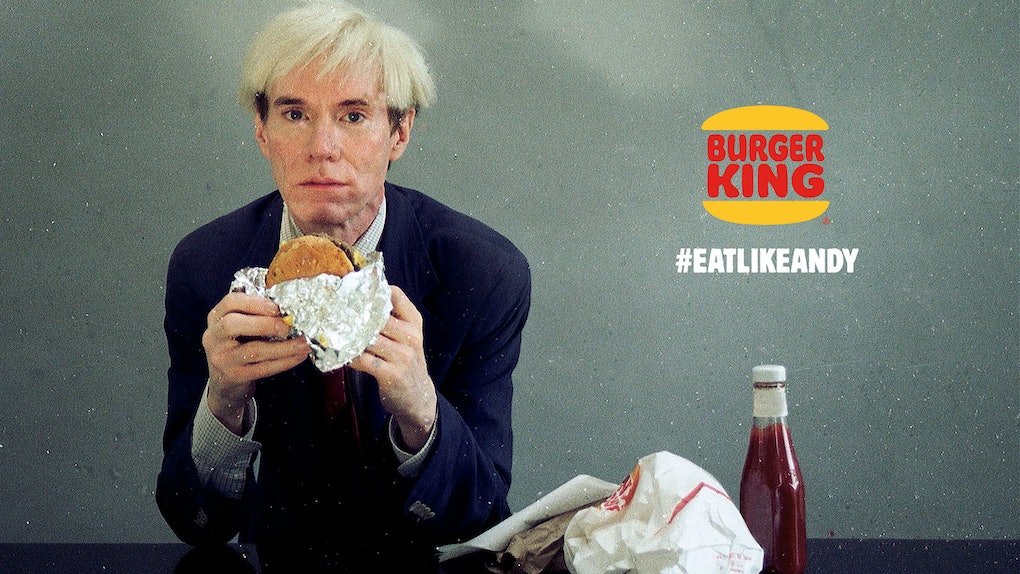 The 2019 Super Bowl is well underway as the New England Patriots and Los Angeles Rams compete for championship. So far, the game has been filled with surprises, a noteworthy halftime show, and of course an onslaught of Super Bowl ads that have made us laugh, hold on to the edge of our seats, and even reflect. But the "Most Unique Ad" award has to go to Burger King's Andy Warhol Super Bowl commercial, a 45-second ad featuring the late photographer enjoying a BK burger.

The ad, which aired live during the fourth quarter, is a Super Bowl commercial that's 37 years in the making. Originally shot in 1982 by Swedish director Jorgen Leth, the clip was part of the film 66 Scenes from America, which features scenes that represent American reality. The mostly silent ad features Warhol unwrapping and opening a Whopper from Burger King. Before taking a bite, he struggles to get some ketchup out of a glass bottle. After his first bite, the hashtag "#EatLikeAndy" flashes across the screen, followed by an old-fashioned Burger King logo.

According to a Burger King press release, the company intended to have a super unique and artistic ad during the Super Bowl this year.

"The spot was meant to break through the traditional Super Bowl commercial break, filled with explosions, slapstick jokes and celebrities, with an almost silent, yet powerful work of art." Marcelo Pascoa, Head of Global Marketing for the Burger King brand, shared why BK has such an affinity for the commercial, saying in the press release, "What we love about Andy is what he represents as an art icon and his message about the democratization of art." Speaking to how Warhol, a cultural icon, related to the classic BK Whopper, Pascoa explained in the release:

Just like his art, America’s Favorite Burger, the Whopper, is for everyone. Our commercial is an invitation for everyone in America to Eat Like Andy.

In case you were hankering for similar content, Leth's 66 Scenes from America is on YouTube, and it features surfers, palm trees, skylines, motels, desert towns, and liquor shops among other American scenes seen through the eyes of a Swedish filmmaker. Though there are many people featured in his film, Warhol's scene is one of the few silent ones.

To make the commercial even more interesting for some Burger King customers, the company gave away Super Bowl Mystery Boxes with DoorDash orders last month. Inside the box was a gray-and-white wig, an OG BK bag, and a coupon for a Whopper, according to a picture of it from the Three Beers and a Podcast blog. Basically, the company made it pretty easy for select fans to #EatLikeAndy.

The BK commercial definitely stands out from the rest of the 2019 Super Bowl commercial cohort. Though many of them feature celebrities like Warhol eventually became, they're much flashier and explicit in their advertising. Pepsi, Coke, and Doritos, for example, all featured super high energy and colorful ads. Teasers for the Budweiser commercial and the Michelob ULTRA ad were the only two that conceptually approached the Burger King ad. They were on the quieter, calmer, and more straightforward side and appealed to people who preferred simplicity over flashiness.

According to the American Marketing Association, the price of Super Bowl ads has gone up 76 percent in the last decade with ads reportedly costing around $5 million, not accounting for the cost of production. It also makes sense that brands bring out their most creative, star-studded ads for the Super Bowl slot, as the game is one of the most watched events in the United States.

More like this
Angry Orchard's Peach Mango & Strawberry Hard Cider Flavors Are Twists On A Classic
By Daffany Chan
Lamar Odom's Quotes About The Kardashian Family Curse Do Not Hold Back
By Brandy Robidoux
Prince Philip, The Duke of Edinburgh, Has Died At The Age Of 99
By Noelle Devoe
Stay up to date