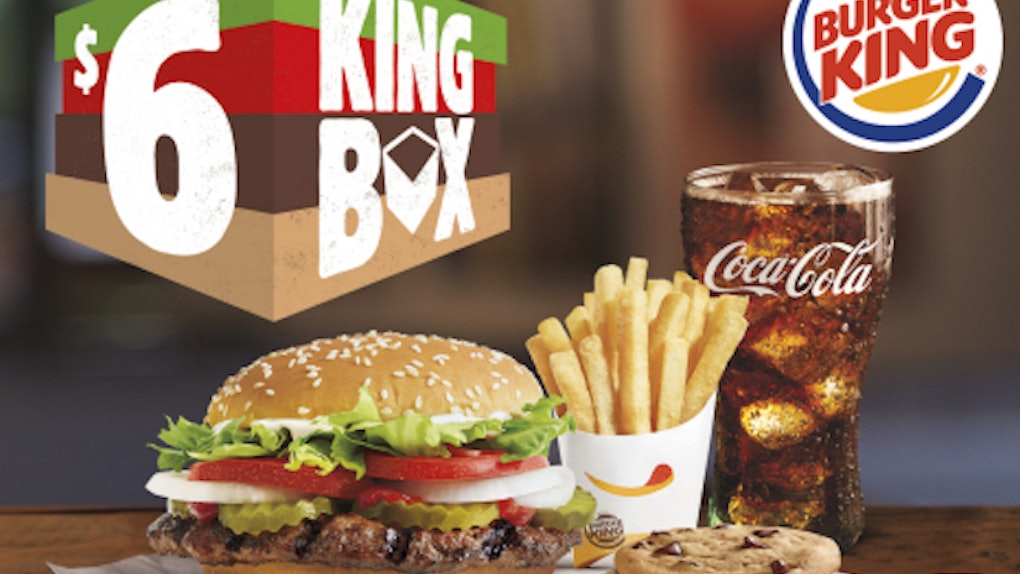 The holidays are a time to eat good food, enjoy life without abandon, and save some money whenever you can (it's an expensive time of year, after all). That's why Burger King's new $6 King Box is a meal deal we can all treat ourselves to, because it is perfect for dining out on a budget. For the price of a fancy latte, you can treat yourself to an entire feast, and maybe even have leftovers for later!

On Dec. 6, Burger King introduced its $6 King Box which consists of a Burger King entrée, french fries, a soft drink, and dessert. Burger King-goers can choose between four entrées: the Whopper Sandwich, the Crispy Chicken Sandwich, the Spicy Chicken Sandwich, and the 3-piece Chicken Tenders, per Business Wire. Your drink of choice and fries will also come with two chocolate chip cookies, truly making the box a full meal. Chris Finazzo, the North America President of Burger King, said in a press release,

The new $6 King Box features our most iconic entrees and offers our guests craveable and delicious premium options that outsize the competition.

The $6 King Box is only available for a limited time and at participating Burger King locations, so I'd eat up while you can.

If the $6 meal deal sounds vaguely familiar to you, thats because McDonald's also introduced one earlier this year. In the Golden Arches' version, customers can choose from a Big Mac, Quarter Pounder with Cheese, Filet-O-Fish, or 10 pc. Chicken McNuggets for their entrée and receive and size soft drink, a side of small fries, and a pie for $6, per the McDonald's website. Just like the budget deal at BK, the McDonald's $6 Classic Meal Deal will last for a limited time at participating locations.

When it comes to "outsizing the competition," the deal seems to be one in a series of jabs Burger King has made at at McDonald's in the past several months. Earlier this month, Burger King launched a national event called "The Whopper Detour," wherein BK fans drive within 600 feet of a McDonald's, check in on the Burger King App, and receive a Whopper for one penny.

Burger King doesn't really even need that gimmick to get hungry customers in the door, though, because with the chain's announcement of the return of Burger King's Cini Minis on Nov. 29, BK fans everywhere got their miniature cinnamon roll fix they've been craving since these bites left the menu in the '90s. The glorious dessert that is an icing-covered cinnamon roll sized down for your dining pleasure is only back in stores for a limited time, so I'd get to your nearest BK as soon as possible.

In even more good news, you can also get a free 4-piece Cini Mini with a $10 GrubHub BK order through the end of 2018, per GrubHub. If you and your dining partner each get a $6 King Box, those free Cini Minis will be yours in no time.

It's truly a great time to be a fast food lover, and with all these deals, it's never been easier to get your meal or treat on a budget.