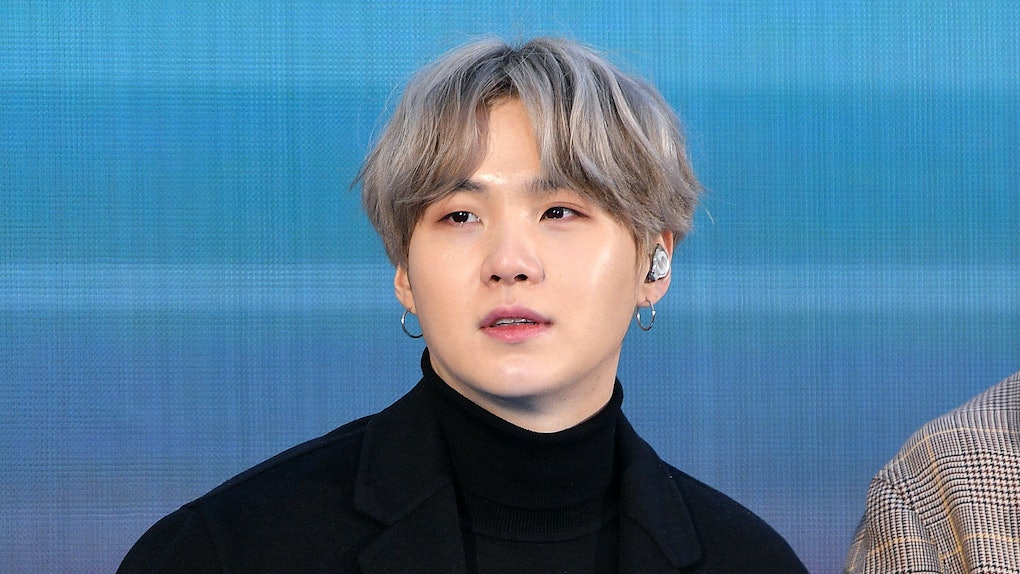 For the past week, Big Hit Entertainment has been teasing something hugely mysterious on Twitter. ARMYs had a feeling it had something to do with BTS. Sure enough, as the countdown nears d-day, the pieces are starting to come together. Since the teaser looked like a silhouette of either Jungkook or Suga, fans thought it was a sign one of their mixtapes was coming. Now, BTS' Suga's new Apple Music picture has fans convinced Agust D 2 will be here soon.

It all started on May 16 when Big Hit shared a dark image with "D-7" written on top of it. Fans instantly thought it was a countdown to a new music release, but if it was a BTS project, they found it suspicious Big Hit didn't tease it on the group's official social media channels.

For the next few days, Big Hit continued sharing more pictures. As the countdown got closer to Saturday, May 23 — the date teased in the photos — fans felt like they could see silhouette in the image, and they theorized it was either Jungkook or Suga since both have confirmed they're working on mixtapes.

By Thursday, May 21, while fans had discerned that whoever was in the photo was most-definitely tied up in some way, the jury was still out over who, exactly, was silhouetted. Surprisingly, though, the possible answer to May 2020's biggest BTS mystery came from a surprising place.

A few hours after getting the latest teaser image from Big Hit, fans discovered Suga's Agust D profile on Apple Music was updated and his new picture had a similar aesthetic to his "Agust D" music videos from all the way back in 2016.

ARMYs took it as confirmation Suga's second mixtape is coming on May 23. Although Big Hit has yet to confirm the release, fans are already celebrating on Twitter by trending "#AGUSTD2ISCOMING."

In the fourth season of BTS' vacation series Bon Voyage, Suga said he worked on his mixtape during their vacation in the summer of 2019. At the time, he explained he still needed to finish arranging and recording the songs.

Judging from all these new teasers, it seems Suga may have finally finished his next solo project and will be introducing it to the world soon.