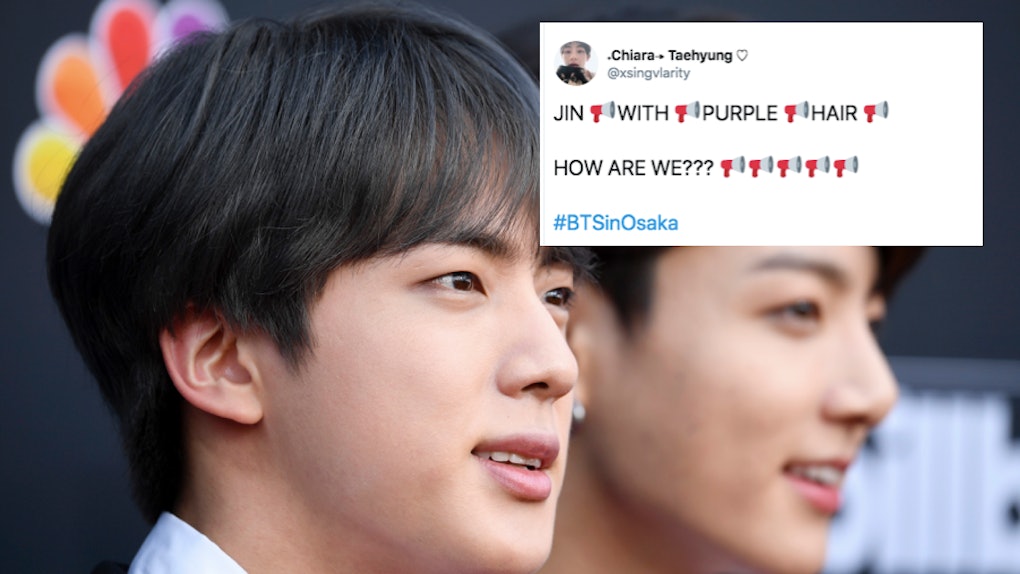 For K-Pop boy band sensation BTS, every new day holds tremendous potential for a new hair color. Whether it's a new hairstyle or hair color, BTS fans go wild over RM, Jin, Suga, J-Hope, Jimin, V, and Jungkook's hair color changes, which is what happened at a recent BTS concert at the Love Yourself: Speak Yourself tour stop in Japan. Though many of the BTS boys were sporting their own unique looks, the crowd went wild for Jin's hair changes. BTS' Jin's new purple hair in Osaka, Japan has ARMYs totally swooning. TBH, why wouldn't it?

Jin debuted his pinkish-purple hairdo at BTS' July 6, 2019 concert at the Yanmar Stadium Nagai in Osaka, Japan. Japanese and international ARMYs immediately took note of the look and, unsurprisingly, totally swooned over it on Twitter. Twitter user @MinahilTaetae posted a picture of purple-haired Jin wearing a black headband across his forehead and wrote, "Jin in purple hair with the bandana with that look is killing me." Twitter user @Y00NSBLISS echoed the loving sentiment and shared, "idk if you guys know this but purple is my fav hair colour on jin I hope he keeps it for a long time." Meanwhile, Twitter user jinoverdose cut right to the chase writing, "JIN LOOKS SO DAMN HANDSOME WITH PURPLE HAIR AAAAAAH." Yeah, that's basically how I feel too.

But, don't take my word for it, check out purple-haired Jin for yourself.

Here he is dancing in an all-white suit:

And another angle where he's busting out the moves in a chic, all-black look and pinkish purple 'do:

And a third angle that showcases both his hair and his incredible body rolling dance moves:

Seriously, ARMYs are so here for this hair update.

According to Korean pop culture website Allkpop, some fans said that Jin claimed his hair, which looked like it had hints of pink, purple, and blue, was a result of a failed dying attempt, leaving it several colors at once. Fans didn't seem to mind, though — in fact, they absolutely loved it. Twitter user @rosejvmin wrote, "genuinely won’t call this a failed dying hair attempt bc it still looks so good on jin," which were honestly my thoughts exactly.

This isn't the first time Jin has sported purple hair on the Love Yourself, Speak Yourself world tour. Jin had purple hair at BTS' sold-out concert at Wembley Stadium in London back in June which had ARMYs screaming, "I purple you!" which is another way ARMYs say, "I love you." Before his purple hair in London, Jin had blonde hair at the BTS concert in São Paolo, Brazil that honestly had some slight Justin Bieber vibes. He was also blonde back in February, proving ARMYs can count on Jin to keep things fresh.

Jin wasn't the only BTS member with super swoon-worthy hair at the K-Pop group's Osaka concert. Fans were also loving V's shaggy brown hairdo, Jungkook's fluffy curly hair, and Suga's black hair, proving that there's absolutely no look the BTS boys can't do. BRB while I go gawk at pictures of all of them.

More like this
Is Olivia Rodrigo's "Good 4 U" About Joshua Bassett? Fans Are Convinced
By Michele Mendez
Prince Harry's Secret Dates With Meghan Markle At The Supermarket Sound Like A Rom-Com
By Brandy Robidoux
Here's How To Stream The 2021 Lotte Duty Free Concert, & Catch BTS & TWICE's Performances
By Michele Mendez
Stay up to date