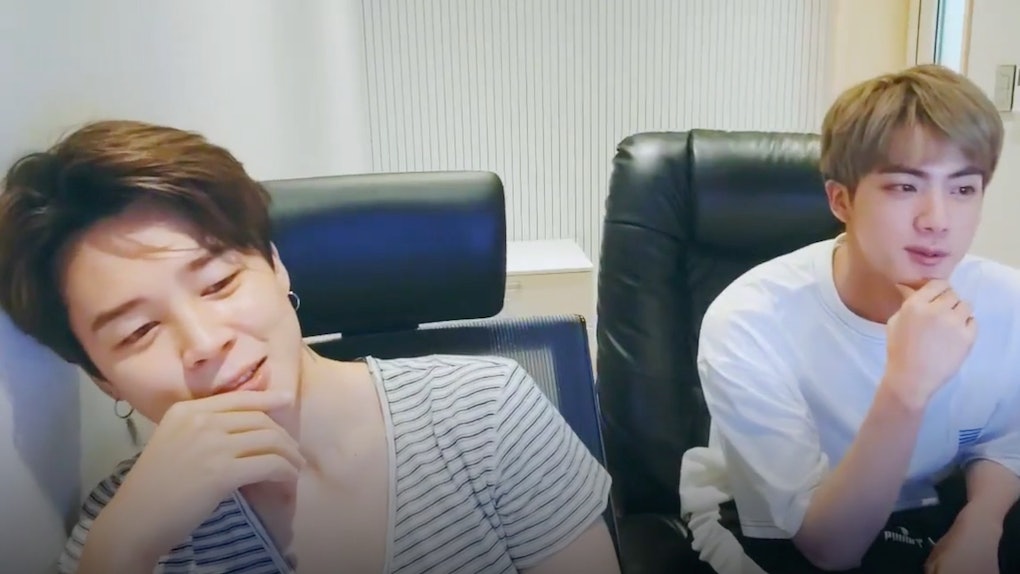 Jimin's back on VLIVE again, y'all! The beloved BTS member hit up the Korean live-streaming platform on Aug. 14, and Jin made a cameo appearance as well. The two of them then proceeded to drop some major truth bombs — you know, like the fact that Jimin is scared of the dentist. Could he be any cuter? But more on that in a second. Because ARMY, you have to see Jimin's VLIVE with Jin and RM — who showed up for a bit, too — because Jimin revealed that he's been keeping a solo song secret and OMFG, if this is true, it's the moment we have all been waiting for.

OK, so JM rolled up to the livestream looking super cute in dangling earrings and a v-necked striped tee shirt. Like the previous two outings, he once again decided to DJ his VLIVE, explaining that he chose Jin's "Tonight" as the opening song for its "calm and atmospheric vibe," according to a fan translation on Twitter.

"Because I promised with you all, I ran immediately here," he explained. Then Jin interrupted him by opening the door, and Jimin jumped up, kicked Jin out, and scolded him for ruining his plans.

"I was going to create the vibe and then call you!" he said as he got up to close the door.

BAHAHAHA, I just love them.

Jimin then called Jin and asked if he could come in as a guest. Such a schemer. Jin said he would, so there ya go.

The pair chatted a little about what Jimin was doing during BTS' two-month break, which apparently includes lots of sleeping, watching TV, and gaming. And then, according to a fan translation by @PJM_GLOBAL, this exchange took place:

Jin: "I heard a rumor that Jimin has been working on producing a song."

Jin then started talking about some track Jimin made, and how he got as far as the beat, melody, and lyrics. You heard me, ARMY! But Jimin was still all like, nahhhh.

Undeterred, Jin then started praising the song. He also called Jimin a great songwriter — so supportive, love to see it — revealed that everyone in BTS loved the song, and said that if Jimin wants to give it to him, he'd love to sing it. Can someone please make this happen ASAP?

After Jin left, Jimin started in on the whole dentist thing. "Laying there with your mouth wide open you are just helpless," he said, according to the fan translation. "Just open-mouthed saying 'EEEEE' and when the dentist comes closer, with his tools, including that little mirror tool."

Nothing has ever been more relatable.

Next, RM came in straight from his workout, and apparently he rolled up barefoot.

"Why are you doing V-app so regularly these days?" he asked Jimin. "Didn't you do it two days ago as well?"

"I also did it five days ago," Jimin responded.

Facts. But Jimin on VLIVE will never get old IMHO, so go ahead and bring it, dude!

After RM split, Jimin ended the video by singing into the camera, and now I'm just sitting here waiting for him to come back and fill the void.