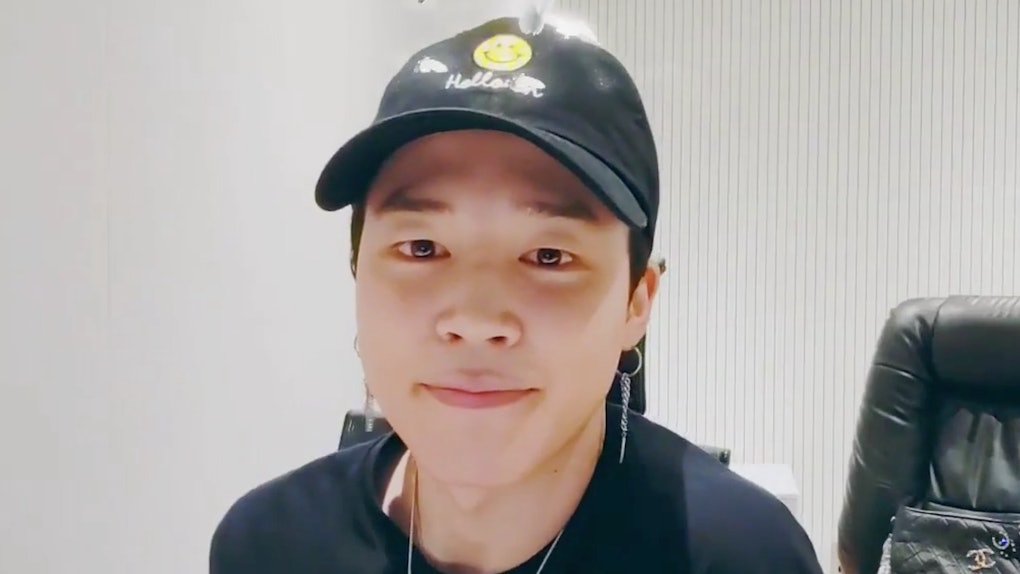 Confession time: I don't really get the whole ASMR thing. Whispering has just always made my skin crawl, and I find all the fingernail tapping and chewing stuff a little unsettling. Any repetitive sound like that just puts me in a bad mood, which means I apparently have something called misophonia, but that's a story for another day. Anyhoo, I know ASMR is currently having a moment, and there are people out there who truly love this stuff. And those are the people who should check out the video of BTS' Jimin doing ASMR on VLive during the group's official break. And if I was absolutely forced to pick one ASMR video to watch for the rest of my life, Jimin's would be my top pick.

The video kicks off with Jimin sitting in a desk chair and rocking out to J-Hope's "Daydream" while wearing a virtual pair of 3D glasses and holding a virtual tub of popcorn. Afterward, he sings along to "Old Town Road," and now I'm just waiting for BTS to drop another version of this damn song. Anyhoo, the whole thing is just as amazing as it sounds, even before Jimin started talking directly into the camera while playing around with all the different filters.

"Hello everyone. I'm back. I came right back. Nice to see you," he said, according to the English subtitles on VLIVE. "Today I... Shall I be honest? Totally honest? I woke up, and it was 4 p.m. I was sleeping the whole time, then I ate, and came straight here. So I'm embarrassed. I think I slept like 10 hours today."

Awww, how cute is he? Although TBH, I don't really get why he's embarrassed about sleeping until 4:00 p.m., because 1) he's on a break and 2) that's legit my life goal.

Anyhoo, as for the ASMR stuff, after a fan on the livestream tells Jimin his voice isn't loud enough, he leans in close and starts whispering into the mic off camera, ASMR style.

ARMYs hear you loud and clear, Jimin. And they're grateful. Truly grateful.

Toward the beginning of the VLIVE, Jimin also took a minute to talk about the fact that it's been a whole month since the group last performed together before their Lotte Duty Free Family concert performance on Aug. 11.

"I think since we perform so much, the members feel strange when we don't perform," he explained. "I feel that way, too."

He also addressed the Aug. 11 announcement from BigHit that BTS will be going on an "official and extended period of rest and relaxation." And he made it perfectly clear for anyone who was worried (aka, folks who aren't hardcore ARMY) that the boys' break is not a sign that they're actually breaking up. In fact, he's seemingly already itching to get back to performing.

"There was an official announcement of us going on vacation," he explained. "But I have no plans. Every time I get to be alone I don't have much to do. So I think I just waste time away. Like I need to be doing something while I'm resting. If I'm just resting it feels like I wasted that time. So, our vacation shouldn't be too long."

Great news! Although I do hope the BTS boys take all the time they need to recharge after their seriously hectic year. ARMY will be right here waiting for them when they return (they've got concerts on the calendar in October, so it won't be long).

And in the meantime, be sure to check out Jimin's full video — it's over 40 minutes long! — on VLIVE.