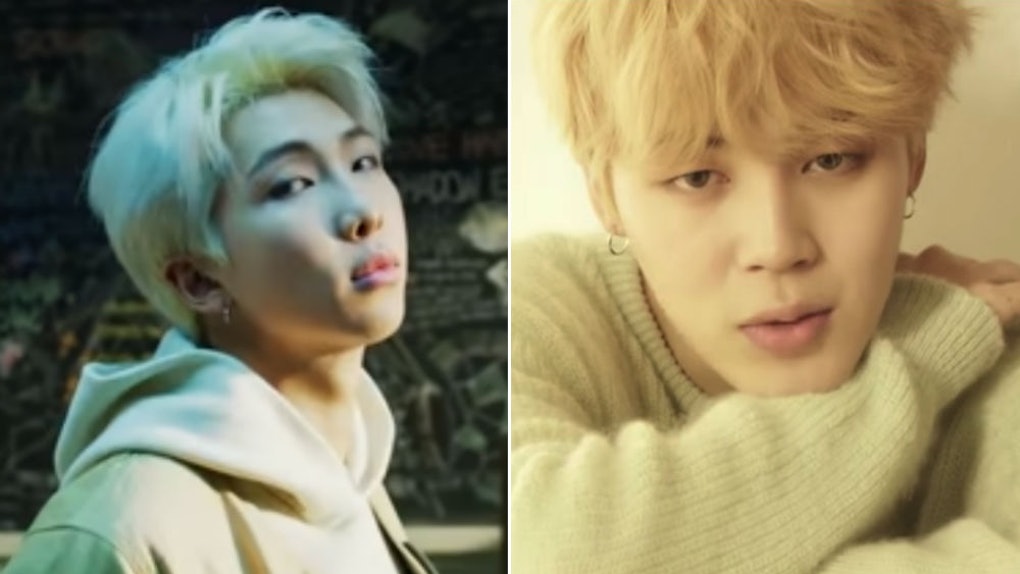 There’s no question that RM is the kind of leader all the members of BTS look up to. Not only is RM an extremely talented guy, but he’s also intelligent, thoughtful, and sensitive. So, it makes sense that his fellow band members and BTS fans admire him so much. When RM’s comeback trailer for Map of the Soul: Persona was released on March 27, the artist more than proved his worth as a role model (not that he hadn't already). And his fellow bandmate Jimin made sure to let the world know how much he looks up to RM. BTS’ Jimin’s tweet about RM’s “Persona” music video is actually really sweet!

RM’s “Persona” music video is 100 percent what you’d expect from RM. It’s every bit as cool and fun as BTS fans would expect. It's cool, colorful, pure hip hop, and even calls back to BTS' infant Skool Luv Affair era.

Even Jimin is gushing over how good it is.

“What the... Hyung, you are way too cool,” Jimin tweeted about the video, according to a translation by @learnkoreanpop. Every member of BTS is super supportive of their bandmates, but Jimin is known to get Twitter fingers whenever any of them drop anything remotely new, so this supportive tweet certainly isn't a surprise.

And, anyway, he’s right. RM is great in the video and definitely gives off a really smooth vibe! In the video, you can see RM in a classroom spitting his lyrics at the speed of light. At certain points in the video, RM can be seen in front of a purple screen and at others, it’s just him with some graphics mixed in. There are other settings in the video as well (like a white room where a ton of faceless people surround RM — this is deep, man), but the classroom is definitely the main one. All in all, though, it’s a really amazing concept video and definitely succeeds in creating anticipation for BTS’ upcoming album. Once you read what the "Persona" lyrics mean in English, all the clever visuals also make way more sense, do def read up.

You can check out Jimin’s tweet about RM’s video down below:

And here’s the video in its entirety:

The video is being touted as BTS’ comeback trailer and that means it’s a big deal. BTS’ new album, Map of the Soul: Persona, is slated to drop on April 12, so it’s just a few weeks away. Right now, the guys are building as much momentum as possible before the release date. But as you probably know by now, they don’t really need to. BTS is one of the most successful boy bands on the planet. It's so successful, in fact, that pre-sale orders for Map of the Soul: Persona have already surpassed the sales of its past albums (which sold quite well already, lol). So, they’ve got this one in the bag and probably don’t even need to worry much about promotion. And yet, BTS continues to go hard, which fans can't be more appreciative of.

There's no two ways about it: BTS is hugely dedicated to its fans. Of course, that means BTS wants to give ARMY every chance possible to experience its new music and all the content that goes with it! Plus, it’s BTS' tradition to drop teasers before the album, so why recreate the wheel, y'know?

In any case, it looks like BTS’ new album Map of the Soul: Persona is going to be one heck of a ride. At least, that’s the vibe I get from RM’s “Persona” video. It may be just a small taste of what’s to come, but already I can tell the new album is going to be amazing and well worth the wait. Bring on April 12!