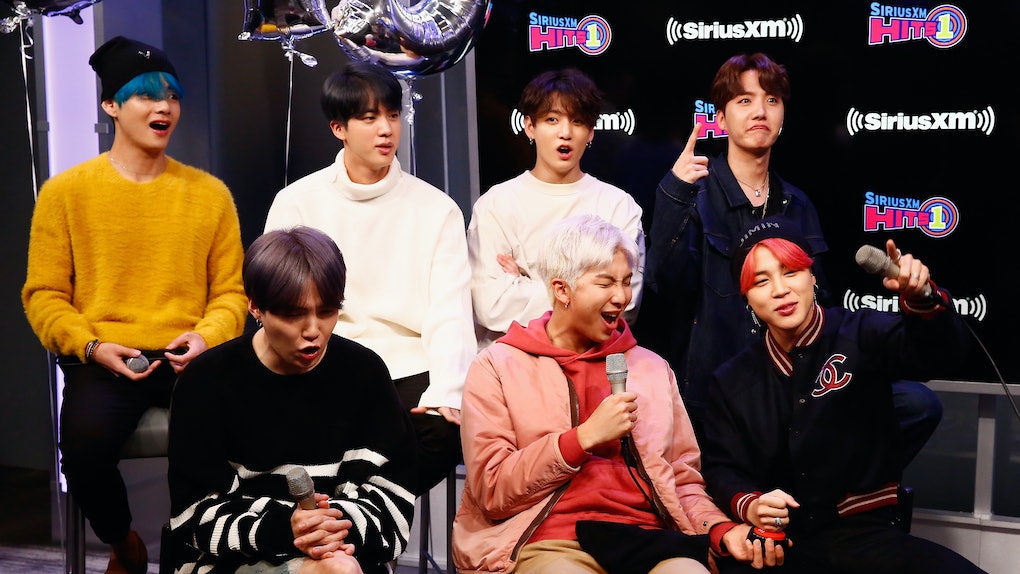 Oh hey, ARMYs. Are you ready for me to throw some major stats at you? Buckle in, because BTS's "Boy With Luv" Billboard Hot 100 debut position just made history, which is kind of this group's thing these days.

Ever since BTS dropped their hit track with collaborator (and genuine friend) Halsey, the world, including and especially the U.S., has been soaking it up. While BTS continues to grow in popularity in the west, so do their chart rankings. Today, "Boy With Luv" is officially the highest charting song by a Korean group on the Hot 100 and ARMYs are losing it.

Oh, and yes. There are a hell of a lot more FACTS where this came from.

According to Soompi, BTS is the second Korean artist ever to reach the Hot 100 top songs. At the time of publication, "Boy With Luv" claimed No. 8 on the coveted Top 10 list. Prior to Jin, Jimin, Jungkook, J-Hope, RM, Suga, and V blasting onto the airwaves, PSY was the first Korean artist to hit the Hot 100 in 2012 with the ever-famous track, "Gangnam Style," which landed him at the No. 2 spot. After that, he did it again at No. 5 with "Gentleman" in 2013. Total respect, PSY, but I suspect BTS is coming for you.

As for K-Pop groups, BTS is the only K-Pop group to crack the top ten on the Billboard Hot 100, and "Boy With Luv"'s No. 8 debut is their personal best (their other Billboard hit, "Fake Love," debuted at No. 10).

In addition to the stats above, today, "Boy With Luv" is chilling at No. 5 on the Streaming Songs chart coming in just shy of 30 million U.S. streams. That makes it BTS' best streaming songs chart ranking following "Fake Love," which hit No. 7 last year. Soompi notes it is the "best streaming week ever for a Korean artist!" Hell yes!

While this is all well and good, it gets even better.

Billboard's Hot 100 chart manager Gary Trust confirmed BTS has not one, but two songs on the list right now! In addition to "Boy with Luv," the boys' song "Make It Right" just snuck in at No. 95, which makes them the first K-Pop act ever with simultaneously charting Hot 100 hits! WOOT WOOT!

Trust noted this hit was created with award-winning artist Ed Sheeran, which means it has a sprinkling of extra magic (not that BTS needs it). Trust tweeted:

Meanwhile, multiple songs off of BTS' latest comeback album Map of the Soul: Persona are simmering on the Billboard Bubbling Under Hot 100 Singles list. This list is updated weekly by Billboard magazine and includes hit songs that have yet to land on the main Hot 100 but are popular AF nonetheless. According to Headline Planet, BTS' tracks "HOME," "Mikrokosmos," "Dionysus," and "Jamais Vu" are all accounted for on the chart.

All of this to say: Stay the F out of BTS' way. They are here to dominate the music landscape and it is our duty — nay, our privilege — to continue to help make that happen.

Congratulations, BTS! See you out there.