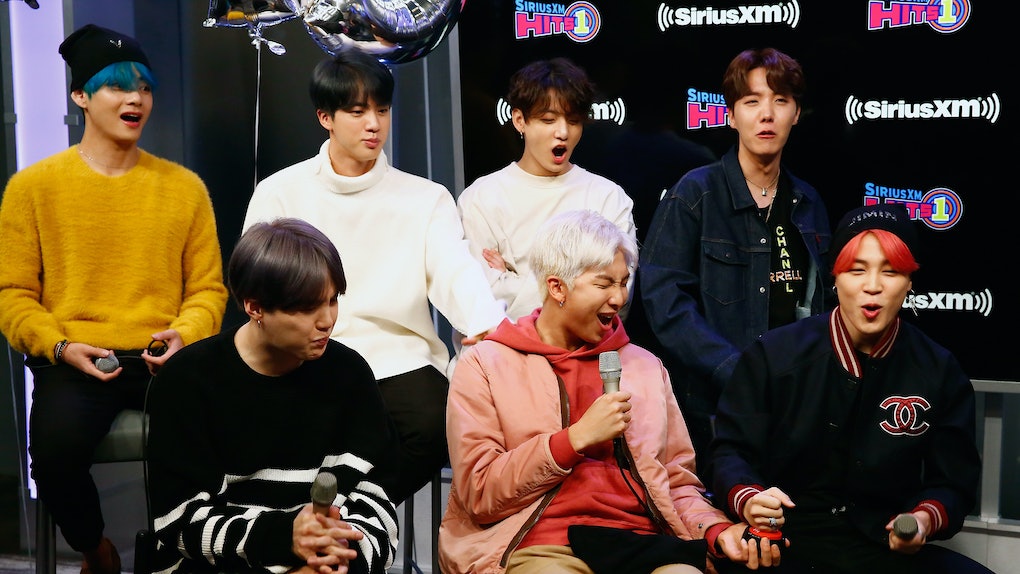 BTS' 'Map Of The Soul: Persona' First-Week Sales Made Billboard History For The Third Time

I thought at some point I would get used to BTS making history with their music and pure talent, but that day definitely has not come. Because, once again, a single tear fell from my eyes as I read the news on April 21 that BTS' Map of the Soul: Persona's first-week sales made Billboard history. That's right, BTS' latest album is officially No. 1 on the Billboard 200 chart and that marks a major history-making accomplishment on many levels. I'll explain.

First of all, let's just talk about the sheer volume of albums Jungkook, Jimin, V, RM, Suga, Jin, and J-Hope moved in the first week after their album dropped on April 12. According to a report by Billboard, BTS snagged their third No. 1 album by selling a whopping 230,000 equivalent album units. Of that number, 196,000 were pure album sales, 8,000 were track equivalent albums (10 individual tracks purchased is equivalent to an album sale), and the final 26,000 sales were stream equivalent albums (1,250 paid subscription audio streams are equivalent to an album and 3,750 ad-supported audio streams equate to an album). And if you want to know what that equates to in overall streams, that's a casual 37.4 million streams, according to Billboard.

So, onto that history-making I was talking about.

Not only does this feat make BTS the only K-pop act to have a Billboard No. 1 album (three times over), but achieving three No. 1s in less than a year puts them in pretty impressive company.

The sales of MotS: Persona give BTS the second-largest sales week of 2019, only behind fellow iconic boybanders, The Backstreet Boys. Their 2019 release, DNA, sold 227,000 copies in its first week. I can't even explain how satisfying it is to put BTS and The Backstreet Boys in the same sentence for such an accomplishment. Foreal.

As much as it feels like BTS are making magic, these amazing feats were no accident. The BTS ARMY is nothing if not organized and committed to making sure BTS succeeds. They spread the word about making sure every fan bought BTS' albums from stores that Billboard recorded sales from, they organized streaming parties and playlists, and they just went above and beyond to make this amazing accomplishment a reality for BTS.

And that's the best part of this whole thing: BTS and the BTS ARMY can celebrate this historic accomplishment together.

So congratulations are in order, for BTS and their ARMY alike!