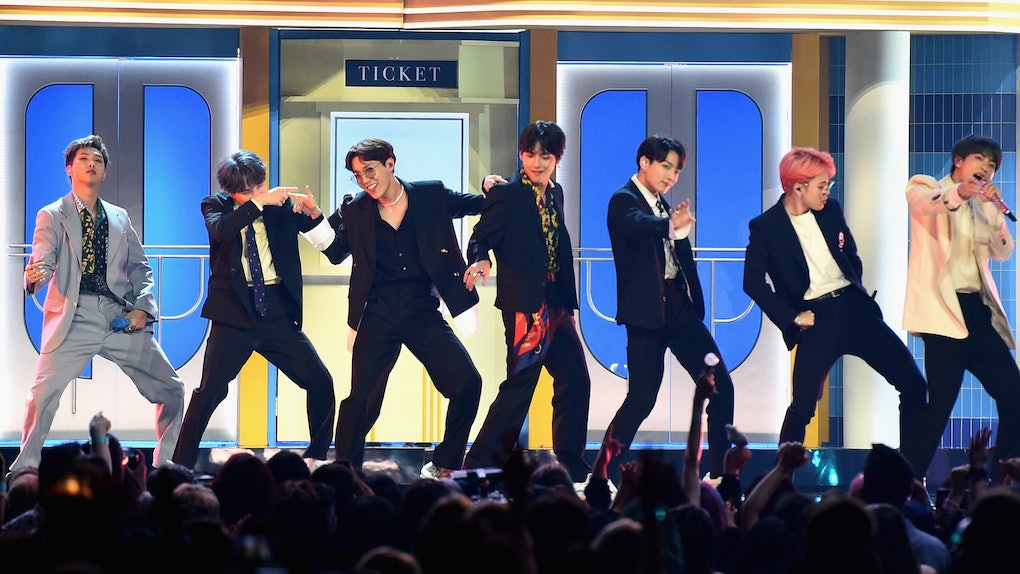 America has only seen a glimpse of what BTS can really do in terms of their live stage performances. Sure, BTS has performed on shows like Saturday Night Live, Jimmy Kimmel Live!, and Good Morning America, as well as award shows like the American Music Awards and the Billboard Music Awards, but that was only BTS' American performances from within the past two years. BTS has been doing their thing for six years, which means they have six years' worth of mind-blowing performances from all over the world. Trust me when I tell you that BTS will go down as one of the greatest live performers ever, because they're just that good. BTS is never one to do the same thing twice and that's what makes each of their performances so unique. I've picked out BTS' 21 best live performances over the years that I think accurately reflect the group's amazing stage presence.

To my fellow members of the ARMY, it was so hard to choose just 21 of BTS' best live performances, but I managed to do it. Of course, there are so many other great BTS performances that aren't on this list, so if you don't see your fave, know that I am just as sad as you that it's not on here. So, without further ado, here are BTS' 21 best live performances.

C'mon! I can't have a list of BTS' top performances and not include BTS' first-ever live performance as a group. Although BTS were newbies to the music industry when they performed on M Countdown on June 13, 2013, their stage presence was undeniable. (Also, peak Jimin's ab reveal at the 2:26 mark. Classic.)

I get out of breath just watching BTS' medley performance from 2014. How does BTS have so much energy to perform such high-intensity choreographed songs back-to-back? It takes lots of lots of practice, of course.

Talk about power! At the 2014 Mnet Asian Music Awards, BTS showed off their competitive side by battling it out with fellow K-Pop group Block.B. They had a dance off, but by the time Jimin took of his shirt, it was all over in my opinion.

I've seen this clip of BTS at the 2015 MBC Music Festival floating around my Twitter timeline a lot and I love it more every time I watch it. BTS' performance begins with Suga playing the piano and Jungkook performing a gorgeous dance before they transition into singing "I Need U" and "Run." RM was absent for this performance, and while he was missed, the way BTS delivered a flawless performance — even in his absence — shows how dynamic and unstoppable the boys really are.

"Perfect Man" may not be one of BTS' own songs, but boy, did they perform it like it was! BTS' rendition of Shinhwa's "Perfect Man" will give you total '90s boyband vibes.

No one, and I mean no one has better intros than BTS. There's just something about their intros that will get you totally hyped for their performance. Just take a look at the group's 2016 performance of "Fire" from MAMA in Hong Kong. The stage may have been huge, but BTS took control and released absolute fire (see what I did there?).

Nope, I'm not done talking about BTS' 2016 MAMA performance just yet. In this video, you can hear RM doing a voice over (which, honestly, should be the first indicator that BTS' performance is going to be dramatic AF) and see J-Hope and Jimin performing an epic dance collaboration on stage. My mouth literally drops in amazement whenever I see this clip.

You guys, I absolutely live for BTS' comeback shows because it's usually when fans get to see BTS perform their new songs for the first time. When BTS debuted their performance of "Mic Drop" for their Mnet comeback special, fans totally lost their cool seeing the guys go back to their hip hop roots, and the most exciting part was seeing the song's choreography for the first time ever.

Everyone has heard of BTS' pop song "DNA," but not everyone has heard of its rock version. At the 2017 KBS Song Festival, BTS performed with a live band that made "DNA" sound completely different than usual. It just goes to show that BTS can literally pull off any genre.

BTS are absolute kings, I tell you. For their 2017 MAMA performance, RM, J-Hope, and Suga started things off with "Cypher Pt. 4" before they joined V, Jimin, Jungkook, and Jin for a super epic performance of "Mic Drop (Remix)." BTS had not one, not two, but three dance breaks in this performance!

The relationship between BTS and their ARMY is so adorable. BTS dedicated their 2017 MBC Music Festival performance to their fans and showed them some love by sprinkling hearts throughout their performance of "Go Go," which was honestly so sweet.

Normally, BTS makes their comeback on Korean music shows, but in 2018, the guys took their comeback to another level by debuting "Fake Love" at the Billboard Music Awards. Fans have never heard the song before then, so they were so excited to see BTS perform it for the very first time. Jungkook's ab reveal was just icing on the cake of an already amazing performance.

BTS' performance of "Fake Love" on M Countdown remains to be one of the group's most-loved performances by fans. Do you want to know how much the BTS ARMY loves this clip? According to Koreaboo, Jimin and Jungkook's solo fan cams from this performance are the No. 1 and No. 2 most-viewed fan cams ever respectfully.

BTS' "IDOL" performance on The Tonight Show with Jimmy Fallon was seriously so impressive because BTS played it cool even while they performed such intense choreography on live TV. But at this point, who's surprised anymore? BTS slays each and every one of their performances.

This performance is exactly why BTS' "Fake Love" era is my fave. BTS' performance at MAMA Japan was so eerie and seriously left me with chills. The dance break at the end was flawless and shows just why BTS is considered the best boy band in the world right now.

I think the BTS ARMY will agree with me that nothing can top BTS performance at the 2018 Melon Music Awards. I will never be able to find the right words to describe this performance because it's just that epic. The last few minutes of this performance in particular is some of the best TV I've ever seen. In the end, the performance basically turned into a huge celebration of Korean culture.

I'm a sucker for BTS' live band performances. They just give their songs a new feel and this performance of "No More Dream" is no different. (It starts around the 9:40 mark.) Instead of going all out on the choreography, BTS sit down for their performance and it gave "No More Dream" a totally chill vibe.

BTS' choreography for "Dionysus" is by far one of their most challenging because it involves a lot of rapid movement and interaction with props. You can just imagine how blown away fans were when they saw BTS perform "Dionysus" for the first time on TV (or through a livestream for international fans!).

BTS' performance of "Boy With Luv" on The Late Show with Stephen Colbert will go down in television history because the guys payed tribute to The Beatles. The performance is so cool to watch because the video was stylized to make it look like it was straight from the '50s.

BTS' Billboard Music Awards performances just get better and better each year. In May, BTS performed "Boy With Luv" with Halsey for the first time and fans absolutely loved every minute of it. BTS and Halsey brought their "Boy With Luv" music video to life and it was so amazing to watch on TV.

BTS are some of the best performers I've ever seen and it was so hard to narrow this list down just 21 of their top performances. Just by watching these 21 clips, I'm feeling inspired to go and rewatch some of BTS' other performances throughout the years because there are just so many good ones. Actually, every BTS performance is lit AF. Am I right or am I right?

More like this
The Best Movie Soundtracks Were So Good, They'll Live On Forever
By Brandy Robidoux
I Tried Singing While Running Like Miley Cyrus & OMG, My Lungs
By Rachel Varina
Which Album Will Taylor Swift Re-Release Next? Her Hints Have Fans Shaking
By Brandy Robidoux
Stay up to date