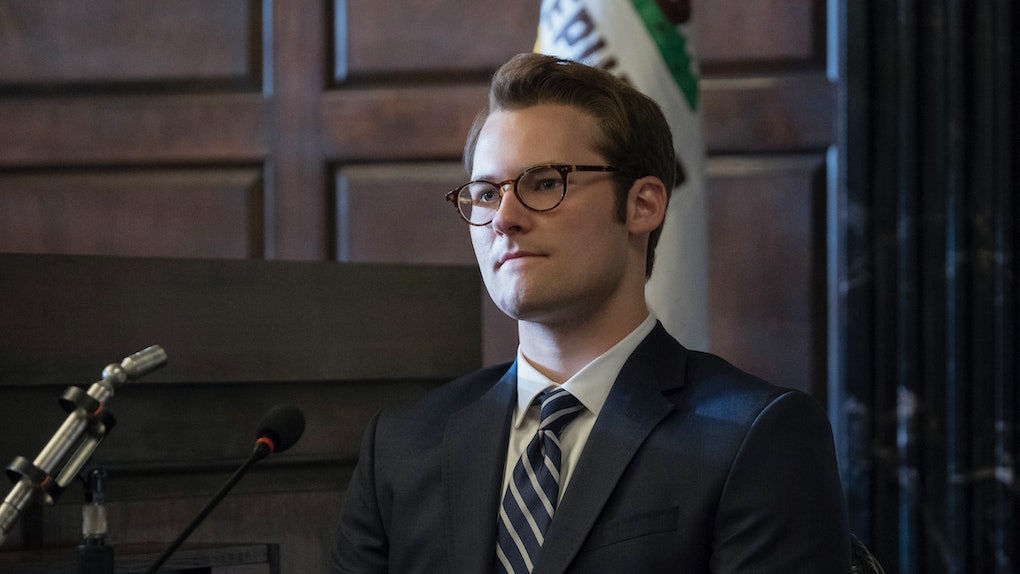 Bryce's Ending In '13 Reasons Why' Season 2 "Pissed Off" Justin Prentice, Because Duh

This post contains spoilers for 13 Reasons Why Season 2. Season 2 of 13 Reasons Why covers plenty of topics worth debating, but Bryce Walker's fate is certainly the most controversial of the new season's plotlines. After being arrested for sexually assaulting Jessica, Bryce only received three months' probation for his crime in addition to getting to start over at a new school. Bryce's ending in 13 Reasons Why Season 2 totally upset viewers, but understandably, it also "pissed off" Justin Prentice, who plays Bryce on the hit Netflix drama.

In an interview with Entertainment Tonight, Prentice admitted that Bryce seemingly getting away with his actions angered him, telling the outlet:

In terms of Bryce’s ending, it pisses me off. Our show is fictional and there are dramatized events, but one thing that it tries to do is sort of mirror reality in a sense and kind of put up a mirror and spotlight the issues that our country is specifically dealing with, but really all over the world. Bryce is privileged, comes from a powerful family, he's a straight, white male and so it’s easier for him to get off, and we see that happening all the time and it sucks. I know fans are gonna be super pissed off, but you should be pissed off because that's the reality right now.

With many viewers and critics comparing the outcome of Bryce's court case to the real-life circumstances of Brock Turner, Bryce's sentence definitely appears light compared to that of Justin, who was arrested alongside him as an accessory to rape. Coming from a less wealthy family and recovering from a heroin addiction, Justin ultimately receives six months' probation, despite being with Jessica while reporting Bryce's assault of her.

As Prentice points out, Bryce does experience his own fleeting moments of fear and retribution throughout Season 2, such as when Mr. Porter ferociously corners him at school and when his mother slaps him. Although he has seemingly escaped legalities almost scot-free, more assault accusations could be in store for Bryce in a potential third season.

As we learned in the Season 2 finale, Chloe is pregnant with Bryce's child, and she was also a receiver of his sexual abuse in the past. Fans have come to assume that Chloe chooses not to testify in the Bakers' case because of her then-secret pregnancy, but Prentice thinks that Chloe's feelings will play a major part in a third season, saying:

Bryce is very manipulative. And as we saw in the flashback when they were kids, he wasn't always this monster of a person, so there are bits of goodness in Bryce... I think [abortion] very much could be [explored] and it would be interesting to see how they handle it because from my point of view, Bryce comes from a powerful family and they have a way of making things disappear, so I don't know. It'd be very interesting to see.

Although the season finale's cliffhanger ending focusing on a thwarted school shooting has little to do with Bryce, Prentice also shared his thoughts on the possible aftermath of such a story. He told ET:

I still think there is more to explore with the fallout. Just because Clay stopped this incident from happening doesn't mean that Tyler’s OK in body and mind. So yeah, I think there's more road to explore and we as a cast are for sure excited to explore it further if they let us.

Netflix has yet to confirm the show's return for a third season, but 13 Reasons Why has definitely left plenty of questions open for new episodes. It's safe to expect that the development of Bryce's character will play quite the role in future stories.