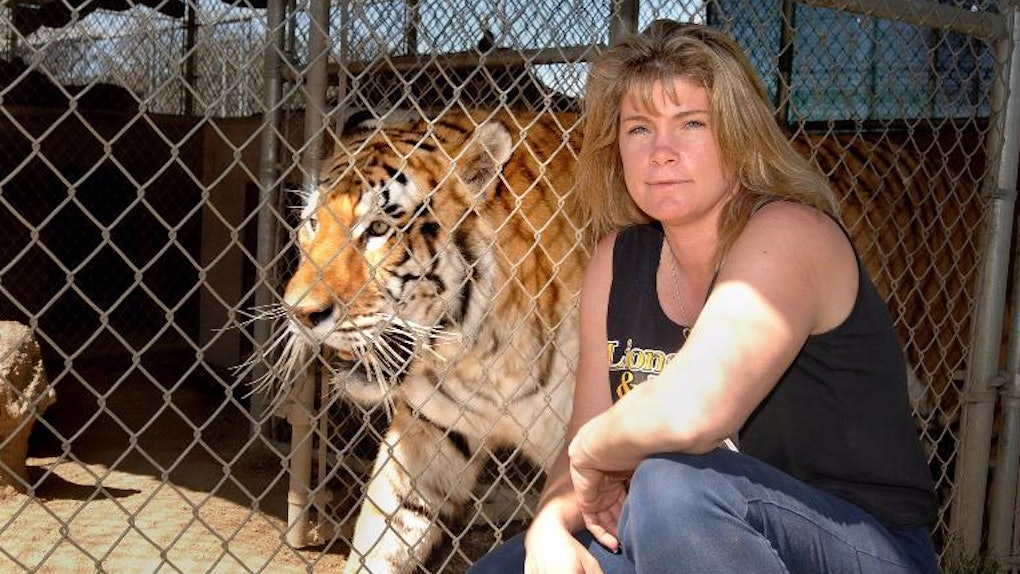 Bobbi Brink Is Rescuing Animals, One Lion, Tiger, Or Bear At A Time

Exotic animal ownership may be under new scrutiny in 2020, but Bobbi Brink has been fighting to end private big cat ownership and rescue wild animals from abusive or neglectful situations around the country for decades. Brink is the founder of Lions, Tigers, and Bears, a no-kill, no-breed, and no-contact animal rescue, sanctuary, and educational facility at the edge of the Cleveland National Forest in Alpine, California. As of May 2020, the sanctuary houses over 65 lions, tigers, bears, bobcats, servals, mountain lions, leopards, horses, and other animals previously abused or neglected by former owners.

It's a full-time job housing, feeding, and caring for the animals. Brink says she starts at about 5 a.m. and checks in at various points during the day. “You're on call 24/7,” she says, “doing everything from [building] electric fences to plumbing to animal care, knowing what to watch for and their basic habits.”

It's lots of TLC and care when they first come in.

Brink officially opened Lions, Tigers, and Bears, a registered nonprofit sanctuary accredited by both the Global Federation of Animal Sanctuaries and the American Sanctuary Association, in 2002 on a friend's 93-acre plot of land. As of 2020, she says she's moved hundreds of animals out of states all around the country and relocated them to Lions, Tigers, and Bears and other reputable sanctuaries.

The rehabilitation process for animals is extensive and typically lasts six months or longer, especially if the animal has been psychologically or physically abused. "It's lots of TLC and care when they first come in to break that barrier and get their trust back from whatever somebody’s done to them," Brink says. New animals will usually be quarantined so the staff can make sure they're safe and healthy before they mingle with the other animals. It's also a good time for the keepers to get to know the animals and vice versa, as well as for keepers to learn what behavioral signs to look out for when taking care of them.

A bear named, appropriately, Sugar Bear, who was brought in from an unaccredited sanctuary in Ohio in August 2012, is one of Brink’s favorite success stories. She says they rescued Sugar Bear, who was living in a 10-foot corn crib when she met him, from a woman who was no longer able to afford the upkeep of 36 animals. "He’d never been out of that corn crib," she says. "The [woman] who had him had good intentions, actually. She'd broken into a hunting ranch and stolen him as a baby in the middle of the night so the hunters wouldn’t shoot him."

At first, Sugar Bear was only used to small and enclosed spaces, and would get visibly distressed when they opened the door to his room. Brink says, "The longer they left the door open, the more stressed he would get." But little by little, Sugar Bear’s keepers would leave it open for one hour a day, and add on another hour, using trails of food to try to convince him to explore the extra space. "One day he finally walked out and touched dirt for the first time, and he was sitting in the dirt like a little kid in a sandbox, playing with [it]," she says. "Now, six months later, he’s all over the habitat."

Brink says the hardest thing to do is turn down taking in animals she doesn't have the space or resources for — because it's necessary to make sure she's providing the best quality of life she can to the animals she already has. "It’s the hardest thing to say no, but for our animals, it’s important,” she says. “You want to be able to provide them [with] the proper everything, for the rest of their lives, which isn’t cheap."

In addition to knowing the ins and outs of running a sanctuary and learning plumbing and electrics, she says she's had to learn how to run the nonprofit like a business, and figure out how to do effective fundraising. The cost of caring for the animals runs over a quarter of a million dollars annually — for things like food, vet care, and "enrichment" materials, aka toys — and that's not including the cost of general maintenance and property upkeep.

Brink was originally in the restaurant business in Texas in the early '90s, when she began volunteering with exotic animal owners after she answered some ads out of curiosity. She quickly learned about the dire straits some animals were in, like in 1998, when she learned about a man who was housing two tigers in a 6-foot-by-12-foot cage with no shelter from the elements.

Brink says she was able to convince both the owner and the appropriate officials to give her 30 days to rescue the two tigers, named Raja and Natasha. On Sept. 5, 2002, the pair became Lions, Tigers, and Bears' first residents, and she hasn't looked back since.

Brink had some luck getting started. When the plans for the sanctuary’s original plot of land fell through, Brink says the former owner of their current plot — where Raja and Natasha had been temporarily staying in an enclosure — had a change of heart after seeing their dedication to the animals and decided to sell Brink and her husband the 93 acres.

In addition to building a new home for displaced animals in the sanctuary, Brink advocates the regulation of private ownership and the breeding of exotic animals. She’s also advocated for animal rights in places like Las Vegas and supported Ohio’s Dangerous Wild Animals Act, which passed in 2012. The law, passed in the aftermath of the 2011 escape and massacre of more than two dozen exotic animals possessed by a private owner, prohibits owning or selling “wild animals,” including big cats, bears, and primates, and regulates certain aspects of their care and keeping.

Brink recalls coming face-to-face with Joseph Maldonado-Passage — you know him better as Tiger King's Joe Exotic — while lobbying in Ohio in 2012. She'd previously met him in the early '90s (her first impression of him was not good), and notes Exotic’s treatment of his animals is one of the things that spurred her interest in big cat welfare. “I started watching, and listening, and paying attention,” she says.

Brink has also lobbied for the Big Cat Public Safety Act, a proposed federal law which has gained momentum recently in light of the release of Tiger King. The proposed bill has taken various forms and names over the past decade, and would ban the breeding and possession of big cats, as well as prohibit the general public from coming into contact with the cats, except for reasons like veterinary care or conservation effort. As of September 2019, the bill has not come to a vote in either chamber of Congress.

Brink firmly believes private ownership of exotic animals is a bad idea. It "never works,” she explains, and the animal is the one who suffers. “Something happens, and [the owner] just can’t properly care for the animal or they end up losing interest, and it just doesn’t work."

"The biggest misconception is that taking away private ownership is taking away [people's] rights," she adds. She thinks most people come to agree with her on this issue when they realize the horrific conditions many of these animals live in.

When it comes to supporting sanctuaries, Brink recommends looking for a few things to make sure you're supporting a legitimate operation, one that handles animals humanely. In addition to being accredited by the Global Federation of Animal Sanctuaries or American Sanctuary Association, the sanctuary should also not have many cubs (which can mean the organization is breeding them to sell them). And under no circumstances should cub petting or handling for photos be allowed. The big thing, Brink says, is for a sanctuary to be transparent about its circumstances, the animals it cares for, and — when things go wrong — what happened. "Know the animals you’re supporting,” she advises. "Know the people and what’s going to happen to these animals."

As hard as the work is, though, Brink says the animals are their own reward. "The most memorable days are when we get animals out of incredibly terrible places,” she says. “It takes so long to do it."