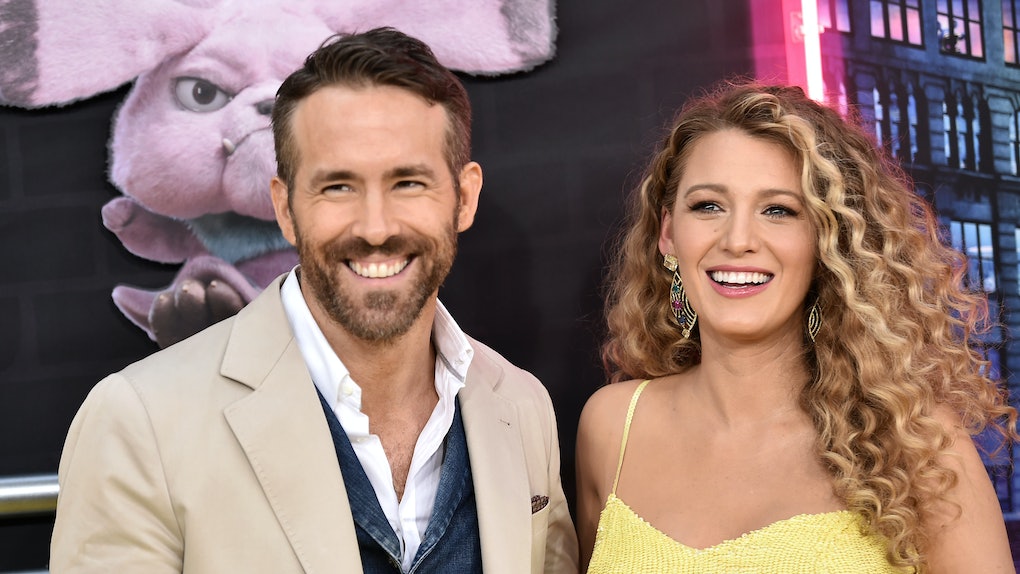 Blake Lively’s Painting For Ryan Reynolds Is So Sentimental & Sweet

Blake Lively and Ryan Reynolds might be famous Hollywood actors, but at the end of the day, they're just two people in love. Like most other couples, they get each other sentimental gifts. But unlike most other couples, theirs are capital-F fancy, including but not limited to Blake Lively’s painting for Ryan Reynolds. The work she commissioned for her man is so full of sentimental Easter eggs, you'll need a tissue ASAP and maybe a pint of Ben & Jerry's.

In an Instagram post published Aug. 15, Reynolds uploaded a photo of himself alongside the painting and called it "the greatest present my wife has ever given me." Alongside a few photos of the painting, Reynolds wrote, "My first job was delivering newspapers for the Vancouver Sun. The house in the painting is my childhood home."

The child in the painting is meant to be Reynolds. The house — and everything else in the frame — holds a special place in the actor's heart. "My brothers and I spent years trying to kill each other on that lawn," he continued. "There are a lot of Easter eggs in the painting, including my idol, John Candy on the front page of the newspaper. The house no longer stands but it’s a living, breathing thing in my head. This piece of art is the greatest present my wife has ever given me. It was created by @dannygalieote." ICYMI, John Candy was a Canadian actor and comedian who passed away in 1994.

Can you even handle the sweetness?!

As Reynolds explained in his caption, the painting was done by artist Danny Galieote, an American painter, who also took to Instagram (after getting permission) to explain his work. "I am Honored and Humbled to announce that I created this painting for the man, Mr. Ryan Reynolds @vancityreynolds," he began. "It was really such an honor to make this meaningful, personal piece for him *commissioned by his amazing wife, Blake Lively @blakelively 🙏. Without describing details, it depicts Ryan busy at his first job as a paperboy in Vancouver, BC. I’m really very VERY proud to have made this painting for them. With much Gratitude🙏Cheers to you Ryan and Blake🙏 🥂 !!!"

It's a super cool painting, and a very thoughtful gift. Reynolds certainly appreciates it, as he concluded his caption by joking, "If there’s ever a fire, I’m grabbing this first. I’ll come back for Blake." Safe to say, she nailed it.

It really seems like this couple has it all going for them, including great senses of humor. If you need even more evidence of that besides Reynolds' hilarious joke about coming back for Blake in case of a fire, never forget his speech at the 2016 MTV Movie Awards. "Everything I do is to make her laugh, especially the sex," he said, as he accepted the award for Best Comedic Performance in Deadpool.

And although Reynolds says his painting from Lively is the best gift she's ever given him, I'm betting their two (soon to be three!) children are their greatest treasures.