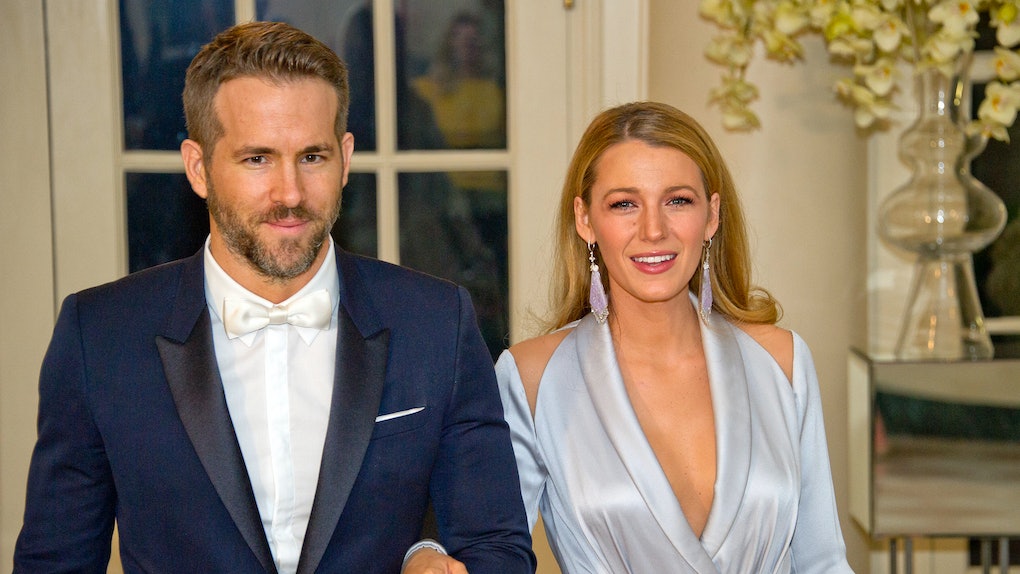 For those of you who might have thought that marriage kills the spark in a relationship, Blake Lively's flirty comment on Ryan Reynolds' Instagram makes it clear that marriage can still be extremely sexy. On Sept. 18, Reynolds posted a series of black and white model shots of himself posing for his company, Aviation Gin. In classic Reynolds form, he paired the eight images with a super hilarious and relatable caption:

LOVE this @AviationGin shoot with the legendary @guyaroch. Hair by @serafinosays and styling by @joseph.episcopo. Bags under my eyes by two thankless assholes who refused to go to bed the night before, despite the fact I read them Winnie the Pooh and nearly half of Stephen King’s The Shining.

Lively was a big fan of the pictures. So happy, in fact, that she decided to comment on them to make clear how into her husband she is, even seven years into their marriage. "Feeling very happy about my life choices right about now," she wrote in the comments section. Obviously, what she means is that she's so attracted to Reynolds in the photos that she's feeling extra grateful for having decided to spend the rest of her life as his wife.

Lively isn't the only one who was taken aback by the pictures. Even her sister chimed in to echo her sentiments, writing: "I am ALSO feeling very happy about my sister’s life choices right about now..." The Rock also had a hilarious caption, "love these shots and love your gin. Oh but I’m an 'a**hole' cos I wanted you to read the second half of the Shining? 💁🏽‍♂️" Lol.

While it's a little mushier than their usual, this isn't the first time Lively and Reynolds have been adorable on social media. For her birthday, on Aug. 25, Reynolds posted a series of LOL-worthy pictures of Lively with her eyes closed.

In his own words, Reynolds made it clear just how lucky he felt to have married Lively when she got him pretty much the best birthday present ever on Aug. 14. Reynolds posted a picture of the custom painting she had commissioned for him along with this caption:

My first job was delivering newspapers for the Vancouver Sun. The house in the painting is my childhood home. My brothers and I spent years trying to kill each other on that lawn. There are a lot of Easter eggs in the painting, including my idol, John Candy on the front page of the newspaper. The house no longer stands but it’s a living, breathing thing in my head. This piece of art is the greatest present my wife has ever given me. It was created by @dannygalieote. If there’s ever a fire, I’m grabbing this first. I’ll come back for Blake.

So, if you're ever feeling down about the whole "till death do us part" thing, take this power couple as your inspiration. Seven years down the line and they still seem head over heels in love for each other.