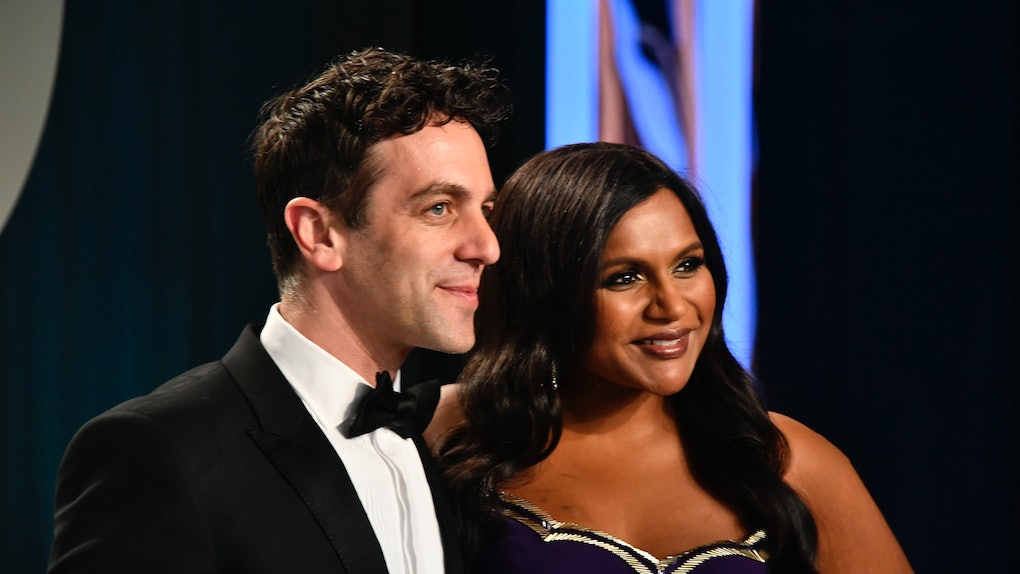 Fans of The Office, remain calm. BJ Novak's comment on Mindy Kaling's "How It's Going" Instagram is going to make you majorly crave a Kelly-Ryan reunion. On Oct. 21, Kaling took part in the viral “How It Started vs. How It's Going” challenge on Instagram. Under the "How It Started" portion, she featured a still of herself playing Kelly Kapoor during the pilot episode of The Office. Under the "How It's Going" portion, she featured a glammed out picture of herself rocking a diamond necklace and a bright yellow gown on the red carpet at The Oscars. As for the caption, she simply wrote, "So yeah, it's going pretty well. How about you?"

The post obviously implied that things have improved since it started, but Novak chimed in with a sweet reminder in the comments section, writing, "I like both."

Are you kidding me!? Is that not the sweetest comment in the history of comments? If this was a rom-com and not real life, that would be the comment the boy leaves on the main character's Instagram as soon as he realizes he's in love with her. Like, he'd see the post and think to himself, "Oh my God. It's her. It's always been her. I like both!" And he'd write the comment then run to her house in the rain and they'd kiss passionately.

But, unfortunately, this is real life and not a rom-com. And, in real life, Novak and Kaling have made it exceedingly clear that, while they briefly dated while on the show, they really are just platonic besties. Also, the whole showing-up-at-her-house-unannounced-for-a-passionate-kiss thing probs isn't the most COVID-safe idea.

That said, the two are very close — so much so that Kaling even named Novak the godfather to her daughter. "If I was on the outside looking at it, I would think the same thing," she told Good Housekeeping in 2019 when asked, for what must have been the millionth time, if she's dating Novak. "But the truth is that B.J. is so much more like family now than a platonic friend. He's the godfather to my daughter. He comes over like once a week. Sometimes he'll come over just to hang out with her."

As you can imagine, being this close to someone of your desired sex (who you also happened to have briefly dated) can make it complicated when you're trying to date someone new. "Whenever we date anyone else, I think there's a period where the person is very skeptical of our friendship," Novak told Entertainment Weekly during a 2013 interview, per Us Weekly. "'Everyone seems to think you two might be a couple, and I don't mean to get in the way. Are you sure you're not dating? Are you sure you're not going to end up dating?' It's such a common thing to have that platonic best friend that becomes a little weird when you start dating someone."

But, honestly, that weirdness might have dissipated over the years. In that same 2019 Good Housekeeping interview, Kaling was asked about this quote she gave during a 2015 interview with InStyle:

My relationship with B.J. Novak is weird as hell. He is not my boyfriend, but he is not my best friend. I guess you could describe our relationship as a 'romantically-charged camaraderie with loud arguments,' but I don't think Facebook would accept this as a new status.

"Even that's shifted," she told Good Housekeeping of the quote. "He comes to Christmas and he's just a member of the family now. But I do remember saying that, in my first book, I think … but I'm so old. That came out, like, eight years ago!"

So, how have they managed to keep things so platonic? Kaling credited time. "In the When Harry Met Sally version of platonic friends, I too think that's strange," she told Good Housekeeping. "But when you've known someone for as long as I’ve known him — the time that we met each other, which was, like, 24. Now, we're both almost 40. It's such a long time that he truly is just a part of my family."

OK, I know this still means they're not dating — but IMO, this is almost even cuter.