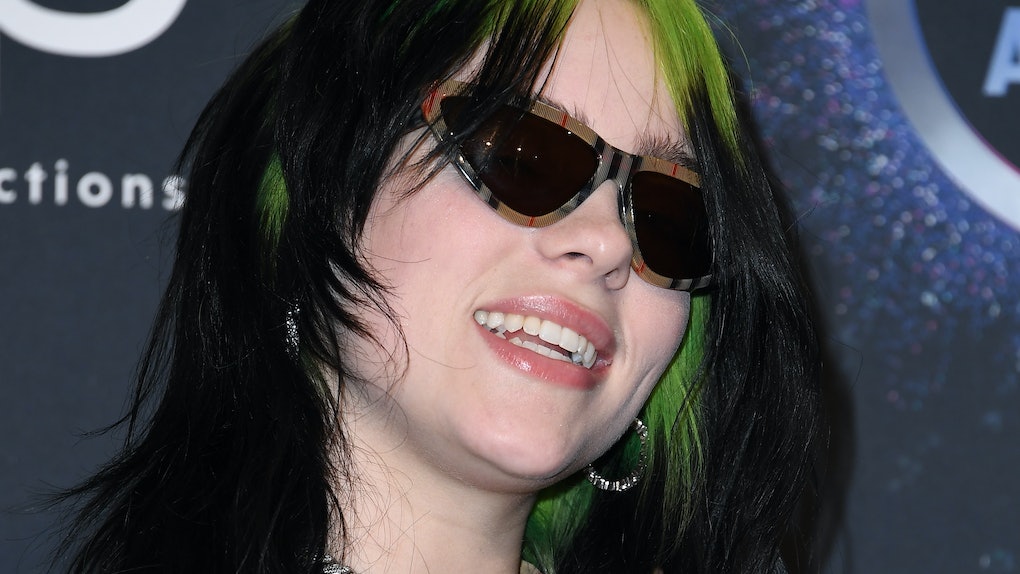 Billie, is that you? Just three weeks after releasing "Everything I Wanted," her new single about the downsides of fame, Billie Eilish just released the visual for "Xanny," her latest single off her 2019 album, When We All Fall Asleep, Where Do We Go? But the real star of Billie Eilish's "Xanny" video is her brown hair. Yep, Eilish is rocking a totally neutral hair color and cut in the new clip (which is actually kind of unexpected for her). Eilish's brown hair makeover will make you do a double-take.

Fans had high expectations for the release of the "Xanny" video, but they definitely weren't expecting this. Plain brown hair? I mean, it's a far cry from what we're used to seeing Eilish sport. She's a big fan of green, and she absolutely slayed steel blue hair. Or, how about that time she rocked vibrant purple locks? But after making her way through all of the colors of the rainbow, to see her with brown hair was a lot to take in.

Anyway, back to the video. "Xanny" is a track Eilish wrote intentionally to sound "miserable." Interestingly enough, the video, which you can watch on YouTube, will make you feel kind of the same way.

The video is typical of Eilish's style, featuring creative, eerie story-telling. In it, she sits on a plain white bench and sings the song while someone repeatedly burns her face with cigarettes. By the end of the video, Eilish is completely covered with vicious welts across her skin. Leave it to Eilish to make you feel uncomfortable AF in unexpected ways.

The video is incredibly simple from start to finish, but Eilish's new hair will definitely distract you.

No word yet on if the brown hair is here to stay, but if so, I'm here for it. With her minimalist white sweater and new 'do, Eilish looks beyond cool. And with the new year just ahead, it's the perfect time for a makeover.

The look may be a far cry from her shaggy green locks at the AMAs just two weeks ago, but cheers to Eilish for always keeping fans on their toes.