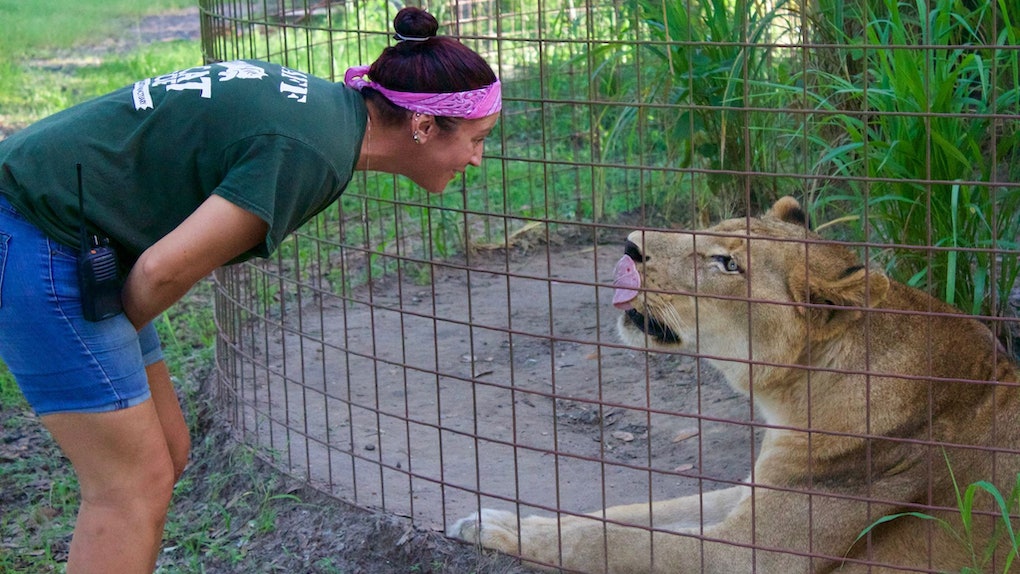 We've all seen cat videos on YouTube and on social media. Afton Tasler makes cat videos for a living. But she doesn't film her house cat chilling on her couch — she films tigers, lions, bobcats, leopards, cougars, lynxes, and other exotic cats for Big Cat Rescue (BCR), a sanctuary outside of Tampa, Florida. Three years ago, when Tasler was volunteering at BCR, she had no idea how to make videos when she was asked to take on the full-time job of media producer, which involves filming, editing, and producing two videos weekly for the sanctuary. But she figured that she's smart and works fast — and between her zoology degree and her years of volunteering at BCR, she knew the cats — so even though she was nervous, she accepted the opportunity.

Now, Tasler is a self-taught pro who makes the incredible videos that fill BCR's Facebook and YouTube pages, bringing in both interest in the sanctuary and money to continue their work through YouTube revenue and donations. At the end of February, she won the 2017 Outstanding Master Keeper Award, which is voted on by her peers.

"No matter what it is that I’m doing here, this is where I belong," Tasler tells me in an interview for Elite Daily.

Tasler, 33, grew up in Illinois and studied zoology at Southern Illinois University with a specialty in big cats and primates. She initially moved to Florida for grad school, but that plan crashed when government funding fell through for her. Instead, in the meantime, she looked for volunteering opportunities, which is how she found the Big Cat Rescue.

Tasler volunteered with BCR for three years, starting in the gift shop and moving her way up from a trainee (working with the lynx and other smaller big cats), to a keeper (working with cats of increasing size and aggression). She loved the work so much that she ended up spending a majority of her time there — when she was offered the full-time job, she was supposed to be volunteering a minimum of 32 hours per week and was really doing 80 (which she did, by the way, while working another job). "Just by spending a lot of time here — and I was really good around the animals, and I was super helpful; I would stay all day and do whatever was asked of me — I think it got myself noticed with our president and our founder," Tasler says. "And I have a very outgoing personality, so I’m really hard to miss."

"They choose you, and when this cat chose me, I was really new here, and I was like, ‘Oh wow, this cat really likes me!’ We had a wonderful relationship that was indescribable because you shouldn’t have something like that — it’s an animal," she says.

Tasler always wanted to work with animals, and now her job requires her to do so. She produces the videos that are shared with BCR's nearly 2.3 million followers on Facebook and nearly 600,000 subscribers on YouTube, and yeah, you need to be around the cats to film the cats. The videos show everything from new cats making their homes at the sanctuary, to educational videos about the animals, to, well, a huge tiger destroying some pumpkins.

Tasler's first successful, viral video almost didn't get made. She was set to have knee surgery, so initially told her boss she'd be skipping a video deadline. But Tasler couldn't deal with the guilt of missing a deadline — even if her boss was OK with it. So she put together a quick video, Angry Tiger Vs Angry Lion, before the surgery. It was a catchy video title for clips of tigers and lions making angry vocalizations, and it swiftly went viral — although "some [viewers] are disappointed that it’s not a fight between them, which it would never be."

In the two years since it was posted, it's racked up over 6 million views.

Big Cat Rescue is a nonprofit organization that takes in big and exotic cats that have been abandoned, abused, or otherwise need a home. This includes animals that have been mistreated as personal pets, abused as part of a performing act, saved from being killed for fashion, and orphaned by hunters. BCR does not breed and does not force the animals to be on display to visitors. In addition to caring for the cats, BCR advocates for laws that would protect big cats from private ownership and various forms of abuse and mistreatment (Tasler actually went to D.C. to lobby for a bill). The videos, and Tasler's work, promote both the sanctuary and education about the animals.

That BCR is a sanctuary is very important to Tasler, who cares about the health and wellness of the animals above all and has always been uncomfortable with the idea of putting animals in cages. "We take these guys out of really bad situations … and we can watch them bounce back from that and really thrive and know that they have a safe space to forever live," she says. "We’re not here making money off of them; we’re a nonprofit — we’re making money for them."

In addition to the videos, Tasler works on "enrichment" for the cats, which is basically giving them things to make their lives better. Enrichment can be permanent (i.e. making sure their enclosures are habitable and designed for them with indestructible toys), daily (i.e. giving them blood or fish popsicles on hot days), and seasonal (i.e. giving them a whole turkey for Thanksgiving, which is both something different and, y'know, tasty).

Although Tasler is living her dream of spending every day with animals and says there are more good days than not, the lows of the job are devastating. "Any bad day is when we have to say goodbye to one of [the cats]," she says. Because of her job function, Tasler often has to be around the cats when they are dying to document and make tribute videos, which is especially tough when she has a bond with that animal. "I could probably sit with my door shut in my office and cry for a couple days while I make it," she says.

"I had a goal in mind, and I wasn’t going to stop until I could reach that goal, no matter what it took. I [worked] a lot of jobs that I didn’t like and was not happy doing, just so I could get here."

Tasler had to deal with the loss of her favorite cat, Narla, a female cougar, in 2016, and "it was devastating." "They choose you, and when this cat chose me, I was really new here, and I was like, ‘Oh wow, this cat really likes me!’ We had a wonderful relationship that was indescribable because you shouldn’t have something like that — it’s an animal," she says. Because of their bond, Tasler became Narla's primary caregiver, which became vital in Narla's last days when she wouldn't eat unless Tasler was there. BCR ultimately had to humanely euthanize Narla, and Tasler had to be there because the cougar wouldn't come out of hiding for anybody else. "I actually got to hold her hand as she passed, and then after that I said I wasn't going to have a favorite, I wasn't going to do that again," she says.

Tasler will still work with cats if they choose her, but she refuses to form a bond like she did with Narla. But when a domestic cat showed up under an intern's housing, Tasler named her Narla "because I figured they were both put here to be with me."

Despite those devastating lows, this is still the job Tasler dreamed about when she was a kid — even if her dreams didn't necessarily involve video editing. Her family and friends were concerned as she was growing up and going through college that she wouldn't be able to find work, or at least the animal-related work she wanted. "I didn’t care what anybody thought about what I wanted to do. I knew this was what I wanted," she says. So when she got the job, her family was extremely supportive. Her mom gave her a bracelet that reads, "She believed she could, so she did," which she wears every day on the job.

"I had a goal in mind, and I wasn’t going to stop until I could reach that goal, no matter what it took. I [worked] a lot of jobs that I didn’t like and was not happy doing, just so I could get here," Tasler says. "If you have a passion, and you feel like that’s what you’re supposed to be doing, never stop trying to achieve that goal and passion of yours. It’s doable, whether it seems so out-of-reach or you have to bend over backwards to get it. Anything’s possible if you really want it."