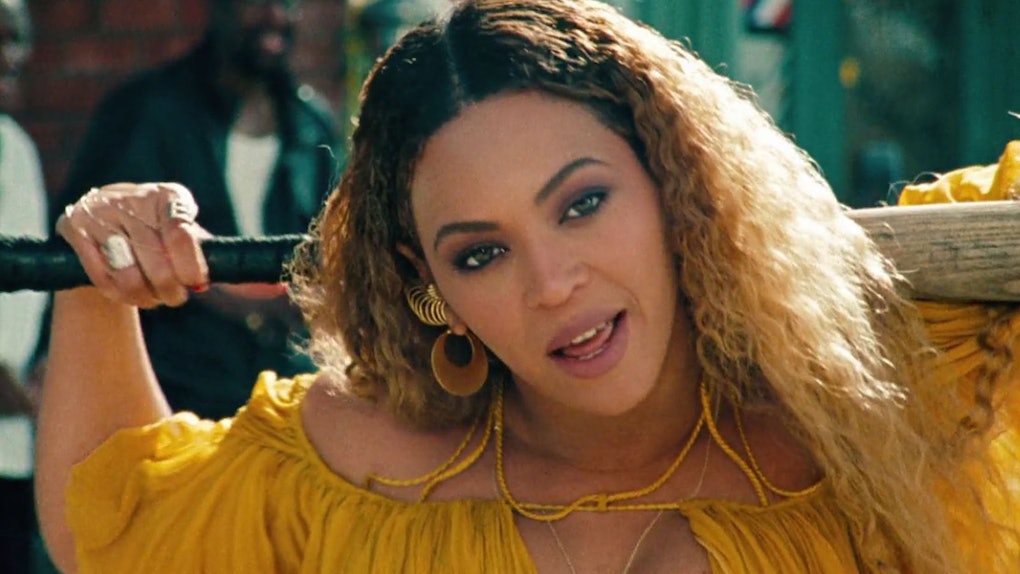 Beyonce's 'Lemonade' Album Will Finally Be Available On Spotify Next Week

It has been three years since Beyonce stopped the world with the surprise release of her sixth studio album Lemonade, which was accompanied by an hourlong film premiering on HBO. While the album is incredibly beloved by fans, there is still one thing about it that is pretty annoying: the only streaming service it is available on is Tidal. That is about to change, though. Beyoncé's Lemonade album will be available on Spotify and Apple Music at long last next week, Variety has confirmed, so prepare to get in formation.

Lemonade will finally be available on all music streaming platforms on Tuesday, April 23, which just so happens to be the three-year anniversary of Lemonade's release. That means that for the first time ever, fans will be able to listen to the album's 12 tracks, including hit singles like "Formation" and "Hold Up," on Spotify, Apple Music, Google Play, or whatever other music streaming service you use. The wide release of Lemonade also marks the first time that all of Beyoncé's catalogue will be available for free streaming.

At the 2017 Grammys, Beyoncé was nominated in nine categories for her work on Lemonade, making her the most nominated artist at that year's ceremony. She wound up winning two awards: Best Music Video for "Formation" and Best Urban Contemporary Album for Lemonade as a whole.

The announcement of Lemonade's wide release also comes shortly after Beyoncé dropped another surprise album. On Wednesday, Beyoncé's concert documentary Homecoming was released on Netflix, along with the surprise release of a new 40-track live album called Homecoming: The Live Album.

The new album contains live recordings of a collection of hits from throughout Beyoncé's long music career that she performed during her iconic 2018 Coachella headlining performance. But it is not all just new recordings of beloved Beyonce bangers — the live album also includes two new bonus tracks: the chopped-and-screwed rap track "I Been On" and the Frankie Beverly and Maze cover "Before I Let Go." The album also contains the live interludes from Beychella, Beyonce's live performance of the anthemic hymn "Lift Every Voice and Sing," and even some singing from Beyoncé's daughter Blue Ivy Carter.

Unlike how she released Lemonade exclusively to Tidal, Beyoncé dropped Homecoming: The Live Album across all music streaming services on the same day that her Beychella concert doc of the same name was released on Netflix. Hopefully this is a sign that Beyoncé fans will not be required to have a Tidal subscription to hear any future music from Queen Bey.

Basically, all this is to say that Beyoncé is probably going to be the soundtrack to your life for the next couple weeks. Not only do fans have a full 40-track live album to obsess over, but now Beyoncé is also offering up free streaming for Lemonade for the first time ever.

Lemonade will be available to stream on all music platforms on Tuesday, April 23, and Beyoncé's Coachella documentary Homecoming is available now on Netflix.

More like this
Here's Where To Find Spotify Mixes By Artist, Genre, & Decade To Discover New Music
By Lara Walsh
Here's How To Stream BTS' 2021 'Bang Bang Con' So You Don't Miss The Concert
By Cianna Garrison
Taylor Swift's 'Fearless (Taylor's Version)' Lyric Changes Are Small, But Meaningful
By Michele Mendez
Stay up to date