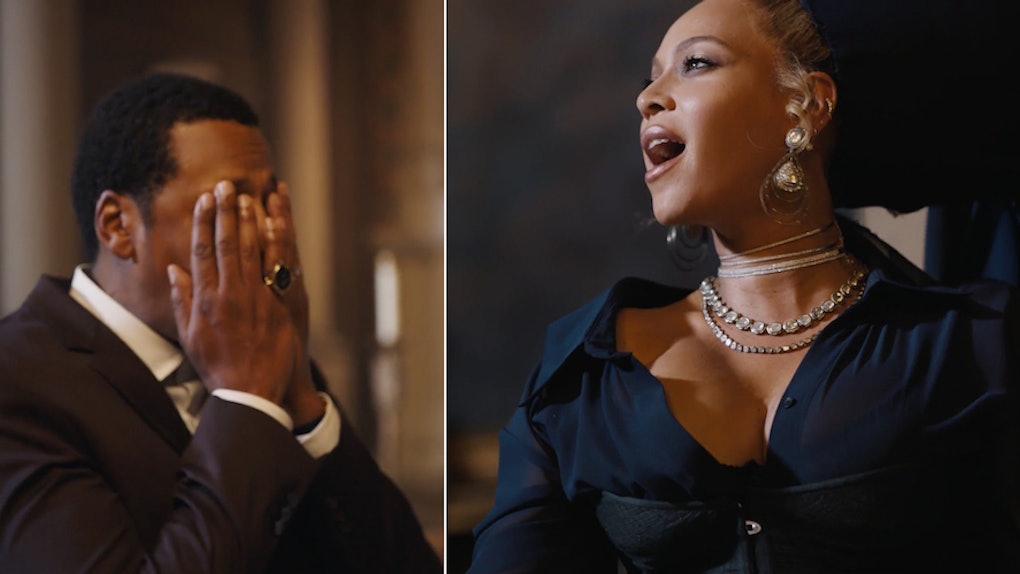 When the teaser trailer for JAY-Z's "Family Feud" music video dropped, fans got glimpses of material that gave them lots of cause for speculation. Beyoncé and JAY-Z in a confessional booth? Queen Bey serving up looks in church? Well, beyond all of that, Beyoncé and JAY-Z's body language in "Family Feud" might offer some subtler glimpses into one of America's favorite marriages.

"Family Feud" is the only song off of JAY's 4:44 album to feature Beyoncé, and the album deals heavily with his admitted infidelity in their marriage. The titular song "4:44" addresses the topic head on, but it's still alluded to heavily in "Family Feud," with lyrics like "Yeah, I'll f*ck up a good thing if you let me / Let me alone, Becky," referring to Beyoncé's take on the topic in the song "Sorry" on her album Lemonade.

For those who really want to know what's going on behind the scenes of the Carter-Knowles marriage, we're probably doomed for disappointment in that we won't ever know everything. This couple is only ever going to show their fans what they want us to see of their lives. But that doesn't mean we can't read between the lines a little bit.

That's why Elite Daily called in body language expert Patti Wood, author of Snap: Making The Most Of First Impressions, Body Language, And Charisma, to tell us what Bey and JAY's body language in "Family Feud" reveals about them and what they could be feeling (or at least, what they feel like showing us), based on some pretty important parts of the video.

1. JAY-Z May Feel Exhausted By His Emotions

At about 5:45 in the video, we see JAY-Z rub his hands over his face while he sings the lyrics, "I run through 'em all." According to Wood, this could be a reference to JAY-Z experiencing a great deal of emotions. "What the face wipe [says] is, 'I don't like any of the emotions I'm feeling, [and] I want to wipe them away," she says, "So, what he [may] want to portray there is that he's gone through all these horrible experiences and all these horrible emotions, and he wants to wipe them away."

Later in the video, at around 6:18, JAY-Z's face is a clear sign that the emotions he's experienced, particularly his "sadness," are indeed genuine. According to Wood, his "facial muscles are down" and "he is really sad and tired; the fatigue is real."

2. Beyoncé's Position On The Pulpit Says A Lot

Positioned on the priest's pulpit in the church, Beyoncé's location in the shot, in comparison to JAY-Z, is likely pretty intentional. "What I also think is interesting non-verbally is her location and how she's presenting herself," says Wood. "She is high up... she's representing herself as above him." Beyoncé's later position in the priest's chair of the confessional booth is another prime example of this.

What may be even more intriguing, Wood believes, is that the video conveys that JAY-Z "is agreeing with that role." "He's down below," she says, and the position he assumes next may help to confirm that symbolism...

At about 5:57 in the video, JAY-Z assumes what Wood refers to as the "figleaf" position, with JAY-Z standing with his arms crossed over his genitals. "He's covering his private parts," she says. "It's a communication of 'OK, I have to cover this. I have shame around this. I don't want to expose this part of me." For JAY-Z especially, who has not shied away from sexual references in the past, Wood believes "that's not normal for him."

At 7:00, as Beyoncé sings "Amen," (as seen in the above screenshot) Wood says the smile on Beyoncé's face is a "real smile." Despite JAY-Z's wrongdoings in the past, Beyoncé's genuine smile could signal that JAY's remorse is something she feels positively about. "This video is playing out his apology to her," says Wood. "She is enjoying every moment of that, and this shot really shows that."

JAY-Z raps, "I'll f*ck up a good thing if you let me," starting at about 7:06 in the video, and subsequently starts rubbing his hands on his head. "Symbolically, he's showing purposefully that [his screwing up] messes with his mind, that he doesn't want to do that again, and he doesn't want to f*ck up again," says Wood. If this particular signal is anything to go by, it's likely Hova won't be cheating again any time soon.

Of course, reading between the lines of "Family Feud" isn't the same as seeing what's happening in the Carter-Knowles marriage and in their respective lives firsthand. They are the only two people on this planet who actually know what's going on with themselves and in their marriage. But as long as they let us stay on the sidelines, we'll be here watching.