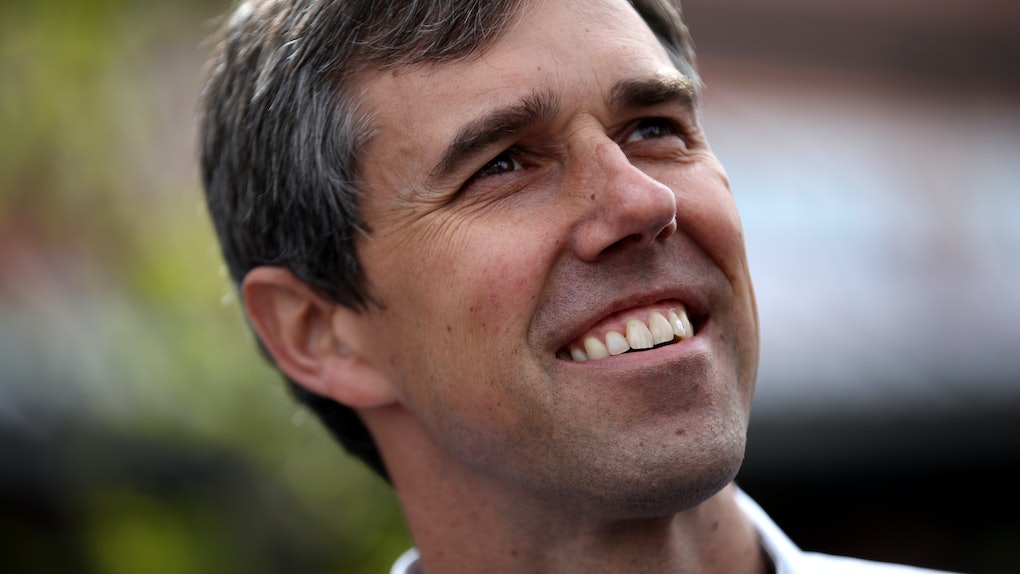 Beto O'Rourke's Response To A Teen's Promposal Was So Awkward

I get that Beto O'Rourke may seem like a cool guy and all, but some people are taking their fandom to new levels. For example, this teenage girl who asked the 2020 presidential candidate to prom. And it gets weirder, because Beto O'Rourke's response to a teen's promposal didn't exactly shut her down. Talk about being awkward. Elite Daily reached out to representatives for O'Rourke for comment on the matter, but did not hear back by the time of publication.

According to the Des Moines Register, this went down on Thursday, April 4 during a rally in Sioux City, Iowa. While reportedly fielding questions on topics such as immigration and climate change, a 17-year-old girl named Claire Campbell stepped up to make her promposal. "It’s OK if you say no, but will you go to prom with me?" she asked. Campbell had also been holding a sign with gold letters on black paper that read, "Will you go to prom w/ me?" which had been spotted beforehand by O'Rourke's team.

The candidate's initial response was heartwarming. "As someone who did not go to prom because no one asked me, I’m really touched," the Democratic presidential candidate responded. "This means more to me than you know."

O'Rourke continued, "But somebody told me about your sign, so we came up with a counter-proposal. Will you caucus for me?" He then lifted up a white sheet of paper that appeared to have the question scribbled over it.

And this wasn't a joke. Campbell reportedly said later that she was disappointed that O'Rourke, who is, like, two decades past his high school years, didn't take her up on the offer "because, like, I need a prom date." She added, "But his counter offer was pretty good." Unfortunately, Campbell can't participate in the Iowa caucuses, though, because she's reportedly from South Dakota.

He might have lost some support there, but O'Rourke, among others, has been leading in the polls. The numbers have also been good for Sen. Bernie Sanders (D-Vermont) and Vice President Joe Biden, who hasn't officially announced a presidential campaign but has reportedly been considering one. However, Biden has recently been facing a string of misconduct allegations, which he has said he doesn't recall, so it's unclear whether he still intends to run for office. Elite Daily previously reached out to representatives for Biden for comment on the allegations, as well as his presidential plans, but did not hear back by the time of publication.

Meanwhile, the Republican field hasn't been moving so much. Candidates include only former Massachusetts Gov. Bill Weld and, of course, President Donald Trump. But there are several people who are said to be considering launching campaigns, including Maryland Gov. Larry Hogan and former Ohio Gov. John Kasich.

They've all got their supporters, but IDK if any of them have reached this level of fandom.