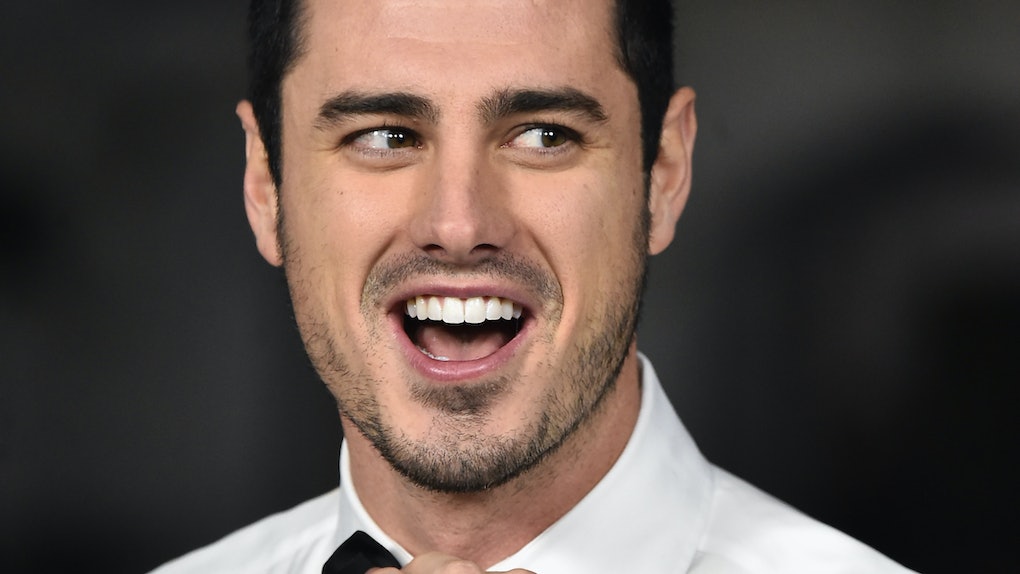 Ben Higgins is no stranger to sharing his heart in a public way. The former Bachelor, who starred in the show’s 20th season in 2016, has always been honest about his feelings — even when it means he’ll inevitably face criticism. (ICYMI: He famously broke from tradition by professing his love to both Lauren Bushnell and Joelle Fletcher before the final rose ceremony, which had Bachelor Nation freaking out at the time.) But now, he’s had time to learn and grow after his engagement with Bushnell ended in May 2017, and he’s done a lot of self-reflection. Ben Higgins’ quotes about dating after The Bachelor reveal he has learned a lot about himself along the way.

I’ve always been a big Ben Higgins fan, so I was excited to talk to him about post-Bachelor life and his new relationship with Jessica Clarke. Higgins admits that fresh off his breakup with Bushnell, he took a break from dating. “For a while, I said, ‘I’m going to stay away from dating,'" Higgins tells Elite Daily. “It was good and healthy, but I don’t think I fully knew myself yet in this new stage.” He admits that the pressure of the show can take a toll on the relationship it creates. “I came out of The Bachelor, I was engaged, I was trying to make a relationship work and go towards a wedding. And then that ends, and you have to rediscover yourself again, like anybody would after a major breakup.”

So after the split, Higgins devoted his time to Generous Coffee, his for-profit social impact initiative. It wasn’t until November 2018 that he jumped back into the dating world, and by that point, he felt ready. “For me now, I sit with a really great girlfriend who is incredibly supportive of my faults and my failures and my confusion,” he tells Elite Daily. “She’s excited for me when cool opportunities pop up, and she celebrates with me when successes happen, but it took me awhile to find that unique person.” Meeting a supportive partner was key to Higgins opening his heart again.

Higgins, 30, met Clarke, a 23-year-old account manager from Nashville, after he slid into her DMs on Instagram. Long story short, he first came across her profile in 2017, when he was in Nashville for a non-profit event. “I pulled up top posts on Instagram and there was her picture. She was just stunning and beautiful, and she stood out to me,” Higgins tells Elite Daily. “I screenshotted her profile and was like, ‘There is nothing normal about this, and there is no way I could explain this to anybody if I acted on it, but I don’t not want to act … How do I handle this appropriately?’” So he forgot about it for awhile, and he didn't make a move for over a year. But when Thanksgiving rolled around last November, he decided to shoot his shot with Clarke.

And so far, things have worked out! At first, they connected daily through FaceTime and text, then Clarke eventually flew to Denver to meet Higgins in person. The couple has been long-distance from the start, which isn’t always easy. Higgins claimed that communication has been key to making it work. “I feel like I know her well just based on a few months of FaceTiming and phone conversations, because we have to talk,” he tells Elite Daily. “If we over-communicate, and if we’re genuine and authentic in our feelings, then [long-distance] dating isn’t that bad.”

The couple went public in February 2019 after Clarke accompanied Higgins on a trip to Honduras with the non-profit Humanity & Hope United, for which Higgins is a board member. “You try to do it with wisdom, but there isn’t a lot of basis for when you should go public,” Higgins says. When he felt confident about where the relationship was headed, he knew it was the right time. “It wasn’t nerve-wracking to me, because at that point, I was excited about where the future was going.”

Higgins and Clarke seem happier than ever, and he cites authenticity as the key to making a relationship work. “If you desire [love], then work your hardest and do your best at pursuing people with intention,” he advises. This is similar to what he told Colton Underwood on this year’s season of The Bachelor, when the two men sat down to discuss Underwood’s journey.

As it turns out, Higgins and Underwood still stay in touch. “Colton and I are friends,” Higgins tells Elite Daily. “We’ll check in and keep up with each other.” Higgins is happy to see his pal in a loving relationship with Cassie Randolph. “Because they’re just dating, I don’t think they feel the enormous amount of pressure of, ‘Oh my gosh, this is so intense, we came out of the show and now we’re engaged, we’re planning a wedding,’” he said. “I think they’re going to take it easy for a bit and enjoy each other, which seems pretty healthy.”

As for Higgins, his travel schedule is busier than ever — he’ll be attending the Men’s Final Four in Minneapolis with Capital One in a few weeks. “I’m a massive basketball fan,” Higgins noted. “I’ve never been able to go [to the Final Four], so for this year, to be able to go and have the insider’s look into the whole weekend is fun for me.” Catch him at the tournament from April 6-8, and look out for more cute social media posts about his relationship with Clarke. I’m already so eager to see where their love will take them.