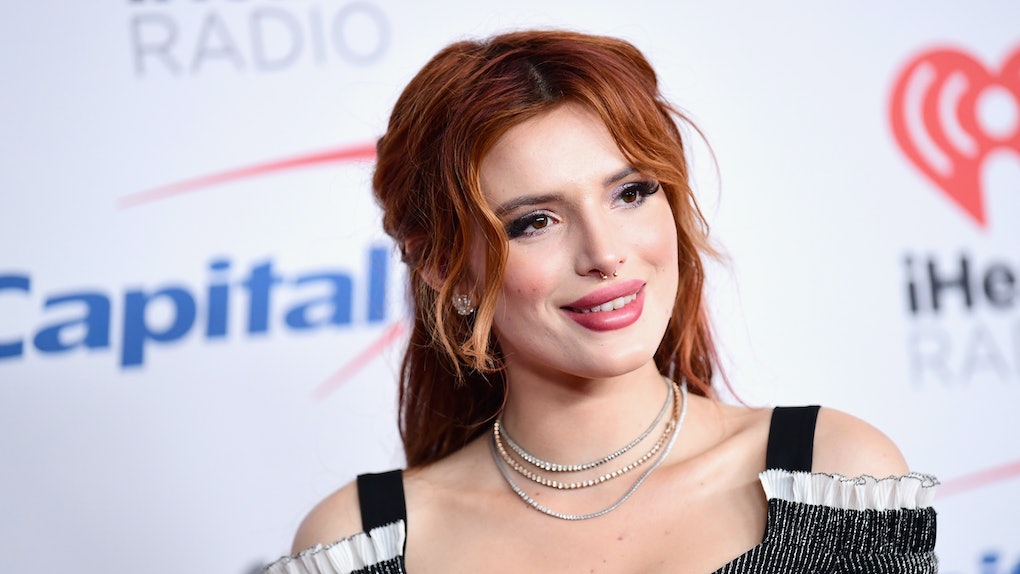 The Golden Globes were a big night for both the #MeToo and the #TimesUp movements, as celebrities swarmed the red carpet in a sea of black in order to shine a light on the dark undertones of sexual harassment in Hollywood and the rest of the world. And while not every one of our favorite It Girls made it to the awards ceremony on Jan. 7, several of them showed their support from home by posting on social media in solidarity. In one raw and emotional post, former Shake It Up star Bella Thorne admitted she was sexually abused until she was well into her teens.

"I was sexually abused and physically growing up from the day I can remember till I was 14, when I finally had the courage to lock my door at night and sit by it," she wrote in a caption of an image of herself on Instagram. "All damn night. Waiting for someone to take advantage of my life again. Over and over I waited for it to stop and finally it did. But some of us aren't as lucky to get out alive. Please today stand up for every soul mistreated. #timesup."

Wow. This is devastating news and it's really brave of Bella to open up about something so personal. Her post is simply heartbreaking — and it's an important reminder that we should try not to judge someone without ever having walked a day in their shoes.

The actress has gotten a bad rap in the press for her seemingly erratic behavior over the last few years, with members of the media questioning the way she conducts herself sometimes — like when she dyed her hair blue and pierced her nipple, or when she posted nude vacation pics.

"It doesn't feel good to think that everybody in the world just thinks you're an absolutely disgusting person and just because I'm somebody where people know my name, it's so much worse for me," she told Playboy back in 2016. "People think that we don't get bullied in Hollywood, but we do! We get bullied by the public eye and fans and it's really, let me tell you, it f*cking hurts."

She's so right. Now, Bella's fans are showing up big time on Twitter to rally around the star and give her some much-needed support. One fan wrote:

I heard about what happened to Bella Thorne & I’m really proud of her for speaking out about her experience w/ abuse. No one should have to endure suffering like that. It doesn’t matter if you don’t like her or not. She’s troubled & I really hope she finds peace.

My heart goes out to Bella Thorne and I hope that she will find peace. That's why I support the #TIMESUP movement. Abuse of women and children must not and cannot be tolerated in any society.

You're very strong and amazing for sharing some of your stories. I need you to know that what you say and share is important. I was sexually assaulted and abused growing up and knowing what someone I look up to has gone through it also makes me feel less alone.

Amazing words, and hopefully Bella is now feeling the love. I am so sorry she had to grow up this way, with so much horror in her life, and I'm really glad she was finally able to share her story, so that now she can finally start the process of finding peace. She is true warrior, and let's hope her shocking admission will move others like her to come forward and start their own healing process. Because like one of her Instagram followers wisely commented, "Telling the truth is the ONLY PROTECTION because it disables the inherent threats the predators rely on."