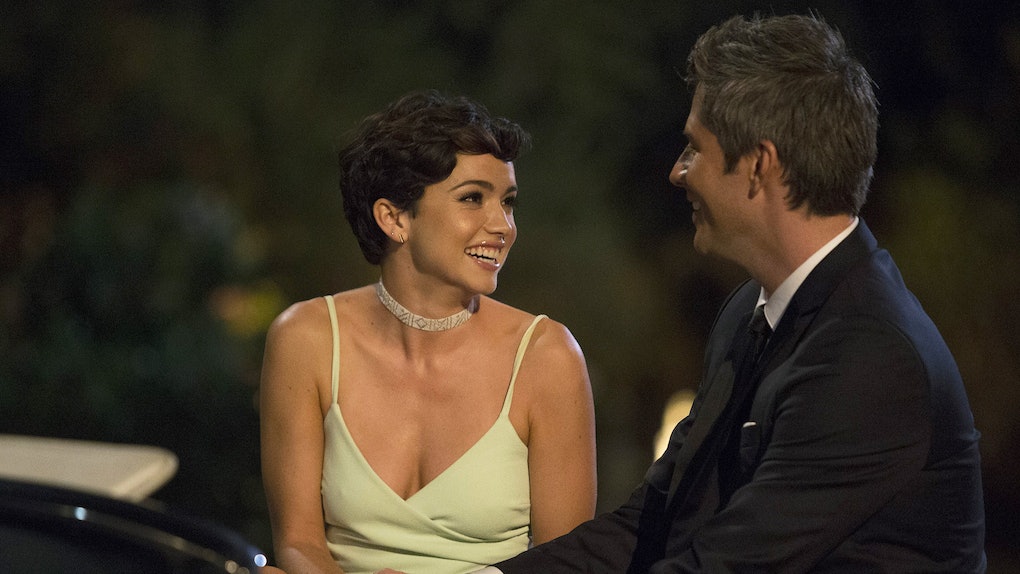 Bekah M. From 'The Bachelor' Gave Birth & The First Photo Of Her Baby Is Too Cute

Colton Underwood might be the one handing out roses on The Bachelor this week, but Bachelor Nation has a new member who has never stepped foot in the mansion. We watched her gold-star reactions and quips on Season 22 of The Bachelor, and now we can see this contestant adapt to motherhood. Bekah M from The Bachelor gave birth and the first picture of her baby daughter is definitely worth all of the roses.

In true Bachelor alum fashion, the arrival of Bekah Martinez's baby hit the internet during Feb. 4's episode of The Bachelor. While the 23-year-old had been posting pregnancy updates up until five days ago, it was her boyfriend Grayston Leonard who shared news of the birth with followers. On his Instagram account, he posted a photo of the new bundle of joy burrowing into Bekah's chest and hiding its face with mittens. A second picture shows the baby under blankets and covering its face from the camera once again.

Grayston wrote, "#nopicturesplease" alongside the photos, perhaps hinting at the nature of the couple's fairly low-key announcement. As of Monday evening, Bekah has yet to post about the baby on her social media, while neither parent initially revealed its name or gender. PEOPLE later confirmed that Bekah welcomed a daughter via natural water birth on Feb. 2.

To paraphrase one of Chris Harrison's favorite sayings, this is one of the most beautiful Bachelor babies...ever.

After capturing attention on Arie Luyendyk Jr.'s Bachelor season for being 22 years old in comparison to Arie's 37, Bekah was considered a favorite for that summer's Bachelor in Paradise cast. When she didn't turn up on the Mexican beach, fans speculated she was in a new relationship, which Bekah confirmed in July 2018 when she opened up to PureWow about her relationship with Grayston. She told the website:

... at first we decided to take our relationship slow because I didn't know if I was going to go on Paradise or not and I wasn't really sure what I wanted. I wasn't sure if I wanted to miss out on that opportunity... I just started realizing that it wasn't worth it for me to put myself in that environment where I could possibly jeopardize what I had with Grayston. I just decided that the guy that I was with back home was the person that I wanted to be with right now, and I didn't want to risk leaving that by keeping my options open and going on Paradise to see if there were any guys there for me.

Bekah then announced her pregnancy in September via a YouTube video. During that footage, she addressed the tough reality of facing such a life-changing event in the early stages of a relationship.

Now with her baby and her man, Bekah may continue to surprise us with what she does next, but don't expect an engagement announcement to pop up on your Instagram feed next. When she revealed her pregnancy, Bekah was honest about herself and Grayston not being in the right place for marriage. "It's a horrible idea for us to consider with all of the hormones and the stress we're experiencing," she told PureWow. "The last thing we need is to consider another commitment on top of what we're already going through... Regardless, we're bound together by sharing this little life."

Congratulations, Bekah and Grayston! We can't wait to hear more about the new baby girl soon.

More like this
What Would An LGBTQ+ 'Bachelor' Season Look Like?
By Abby Monteil
Peter Weber’s Quote About How ‘Bachelor’ Producers Get Contestants To Kiss Is Wild
By Abby Monteil
Billy Eichner Joked Colton Underwood Was The "First Gay Bachelor" 2 Years Ago
By Corinne Sullivan
Stay up to date