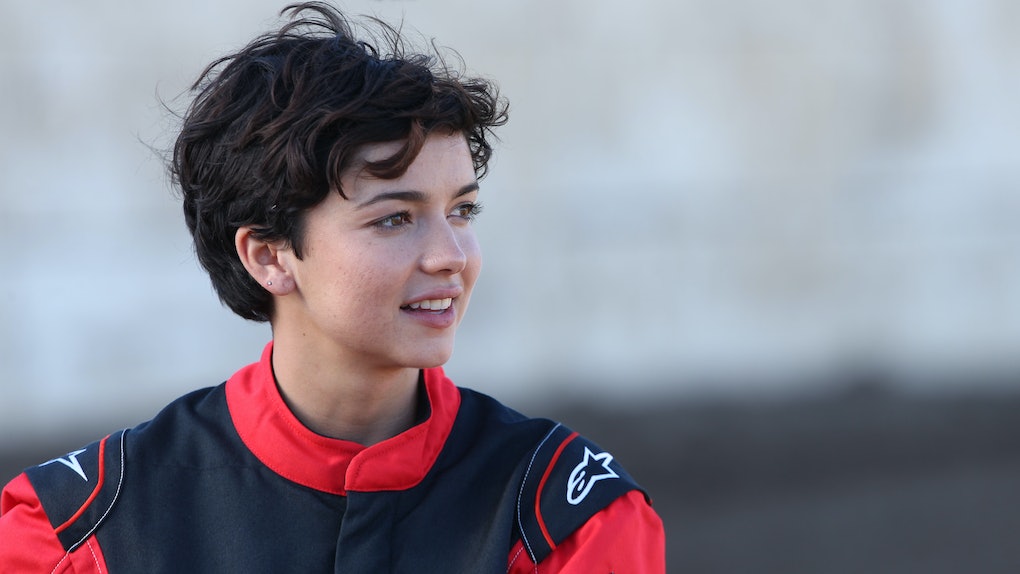 Bekah From 'The Bachelor' Has Modeling Photos & They're Absolutely Stunning

The Bachelor Season 22 is chock full of gorgeous women, so it's no shock to hear that some of them have modeling pasts. One in particular is Bekah — the woman with the short hair and spunky taste for adventure and classic cars — and it looks like she's no stranger to getting behind the camera. Bekah from The Bachelor has modeling photos, or what look like them, on social media and of course, they're stunning.

Chris Harrison told PEOPLE back in December that the beautiful Los Angeles gal was one of his picks for Arie, revealing, "She’s a starlet. There is something about this girl’s energy that blows Arie away and he is captivated by her. They have this chemistry that gets under his skin.” Now that two episodes are underway and their relationship has started to unfold, we get what he's saying.

When Bekah's not competing on The Bachelor she's rock climbing, traveling, and working as a nanny. It appears she also has some modeling shoots under her belt, too.

Bekah's Instagram page shows off her style, humor, and stunning selfies, as well as some possibly professional photos that prove she's a natural when it comes to posing for the lens.

Twitter not only picked up on Bekah's model-esque shots, they're also very invested in figuring out her lookalikes. Many people have noted that she's got a resemblance to Rizzo (Stockard Channing) from Grease. They've also pointed out similarities to the girl from the copy place from Friends, aka she who inspired "we were on a break." That combined with Arie's Ross-like ways and you've pretty much got a meme right there.

It was obvious that Arie was mesmerized by Bekah's magnetism from the get-go and that feeling hasn't dissipated yet. The second episode saw them sneaking away for smooches and expressing their mutual crushes on one another. Arie seems vulnerable when he's around her, but that doesn't mean he's not putting his Kissing Bandit skills to work while he's at it. "I just love your energy. You make me smile every time I see you," Arie told her pre-makeout. "It's just one of those things that I like having you around. It just makes me happy."

The two of them then went off for even more time at the next night's cocktail party, even though he ended up giving Seinne the date rose. Aaaand cue more sultry lip-locking. "When we kiss it's just apparent that she could be the whole package," Arie remarked.

Arie recently talked with The Hollywood Reporter about the whole drama surrounding Bekah's mysterious age, which is probably made out to be a bigger deal than it actually is. The former race car driver said,

I think she has this bold, big personality and you see that in the first episode already. I love her facial expressions. That’s something I didn’t really catch on to until watching it back on Monday. It’s interesting and the viewers are really going to get to know her. I’m interested to see how everyone takes it.

He also mentioned that his biggest regret from the limo entrance experience was, "saying that 'excitement excites me,' along with 'my love for pizza' ... I think I was just so taken aback by Bekah and her big personality, and there were little things, too, that first night that threw me that you don’t even think about when you’re a contestant."

You're only human, Arie. And who doesn't get excited about pizza in their lives? Clearly this remark did not hurt his chances with that attractive woman because he and Bekah seem to be getting along just fine.